Written in the Go language, the OPA (Open Policy Agent) can be added several ways to add policy decision making. It was started in 2016 at Styra.com (by @sometorin).

OPA’s initial use case was for Kubernetes Orchestration Admission Control. 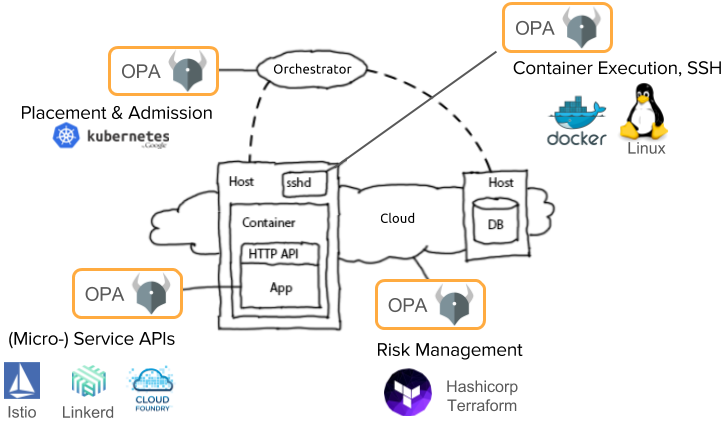 OPA is called a general purpose policy engine because it enables the answering of such policy questions above as a separate concern from enforcement.

OPA can be initiated as a host-level daemon via SSH to ensure that container executions are performed according to rules.

In March 2018, OPA was donated to the CNCF (Cloud Native Computing Foundation), which also manages Kubernetes and Istio.

With 2,600 stars and 79 contributors as of October 13, 2019, https://github.com/open-policy-agent/opa/releases has releases for Mac, Linux, and Windows.

View its installer on Mac with Homebrew:

Install its CLI program on Mac:

Get the version installed:

OPA has a Log service API for emitting audit logs.

OPA has a Status service API to report its service status, available from its CLI:

OPA has a VS Code plugin for tracing, profiling.

OPA accepts policy & data from other programs via its Bundle service API.

OPA maintains both policies and data in memory (for fast access). So it operates as a host-local “cache” for policy decisions.

based on Policy definitions , with no external run-time dependencies.

https://github.com/open-policy-agent/frameworks/tree/master/constraint Enforcement Points are places where constraints can be enforced. Examples are Git hooks and Kubernetes admission controllers and audit systems.

Target is an abstract concept. It represents a coherent set of objects sharing a common identification and/or selection scheme, generic purpose, and can be analyzed in the same validation context.

Previous rules engines such as Drools were designed with a “backward chaining inference”, which was too strange and complicated. The rules were static logic.

But OPA’s rules are dynamic over time and defined using a declarative syntax rather than a programmatic if-then-else logic referencing object classes, methods, and binary trees.

OPA declares Policy definitions in “Rego” text format, so they can be stored in GitHub.

It’s the policy author that knows what the data means in the real world and writes logic to make a policy decision.