Analysis for trends and anomalies

This repository is a set of software to enable processing, alerting, and visualization of data collected from various sources.

This effort is necessary for data related especially to load/stress testing because current solutions provide visualization of only individuals metrics for individual runs, without understanding additional context.

The context needed span across many dimensions to identify:

More importantly, a different approach is needed than what current vendors provide in terms of alert triggers: Instead of requiring people to diligently pour through all the various graphs across runs in various environments for every release, this effort aims for people to receive alerts after intelligent software identify trends and anomalies after assimilating data from various runs and sources, around the clock.

We want a way to use what I call “peak summary metrics”, such as the amount of Memory or average response time during the “steady state period” between ramp-up and ramp-down:

In the above example, when the Hits Per Second averaged 110 for the transaction at the top line (in purple), other metrics were, during the same “steady state period” period:

What is different about these numbers is that each metric summarizes conditions over the entire run (not a single point in time).

Repeated over several runs, sets of summary numbers enables trends and anomalies to be identified in the association between various metrics (such as between memory used and Hits per Second, etc.).

When runs are repeated several times, several sets of metrics can be plotted together to yield scatterplots such as this: 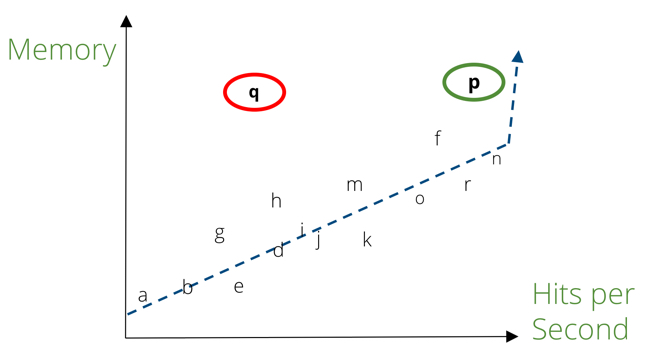 The formula from the dotted line derived can be used to proactively identify anomalies. During live runs the measurement system can refer to each formula to determine whether the system is functioning normally at point “p” (illustrated above), or is using more memory than expected at point “q”.

Now instead of just total Memory used, we calculate a ratio of peak Memory per user for each run. We then plot it against peak hits per second for the same run. 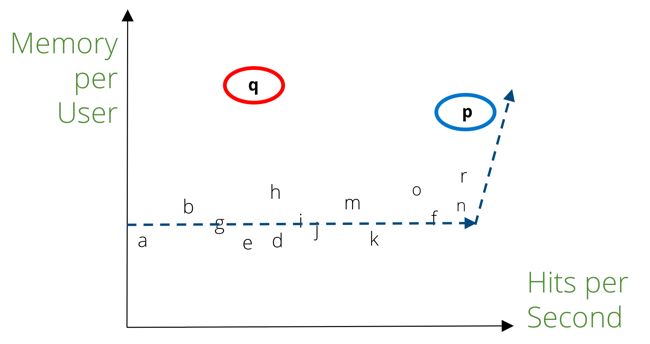 We get a flat line because the metric factors in the cause of memory usage.

That’s until we reach the maximum hits per second that can be handled, when swapping behavior occurs, causing more memory to be used.

Financial Analysts have long calculated various ratios to identify relationships among all companies, and then defining thresholds for alerts when applied to specific companies.

A ratio can be more useful that a static number because it involves a relationship between two metrics. In the case of Memory per user, history often shows that it is relatively stable for a range of HPS (Hits Per Second) levels until the HPS goes beyond a threshold level.

If in production Memory per User spikes beyond the normal level, we know there is a problem.

Hopefully the real-time monitor (in NGINX, etc.) would understand the context of loads and automatically limit sending more than what each server can handle.

Here is how data is processed:

The innovation here is that:

2) the system tries various mechanisms to detect trends and anomalies by generating formulas and seeing how historical data fits. Different ratios are examined. For example, instead of Memory vs. HPS it can be CPU vs. HPS.

This requires skill with different technologies and thus cross-department coordination:

The trouble with the current situation is that the APM software looks emphirically at what is happening but not make use of what has been discovered during performance testing.

I chose Python To parse HTML, etc. on the Goolge cloud because of its popularity for Machine Learning.

http://docs.python-guide.org/en/latest/scenarios/scrape/ uses the Requests module instead of urllib2 built-in.

JetBrains MPS makes it easier to work with DSLs and their projection editor of AST trees. This enables code to be edited as text, tables, diagrams, a form, or a combination of those.

First Date, Second Date and Getting started by tomasetti.me