What will happen when you lose that data?

Many ways to lose

There are many ways your files can die or disappear:

DR;TL Use several techniques for peace of mind with data on your laptops:

There are reasons for each:

There is a weakness to each as well:

PROTIP: Schedule time ahead to make sure you have a fresh backup before you leave home, in case your laptop is lost, stolen, or damaged while on the road.

The longer explanation on laptops 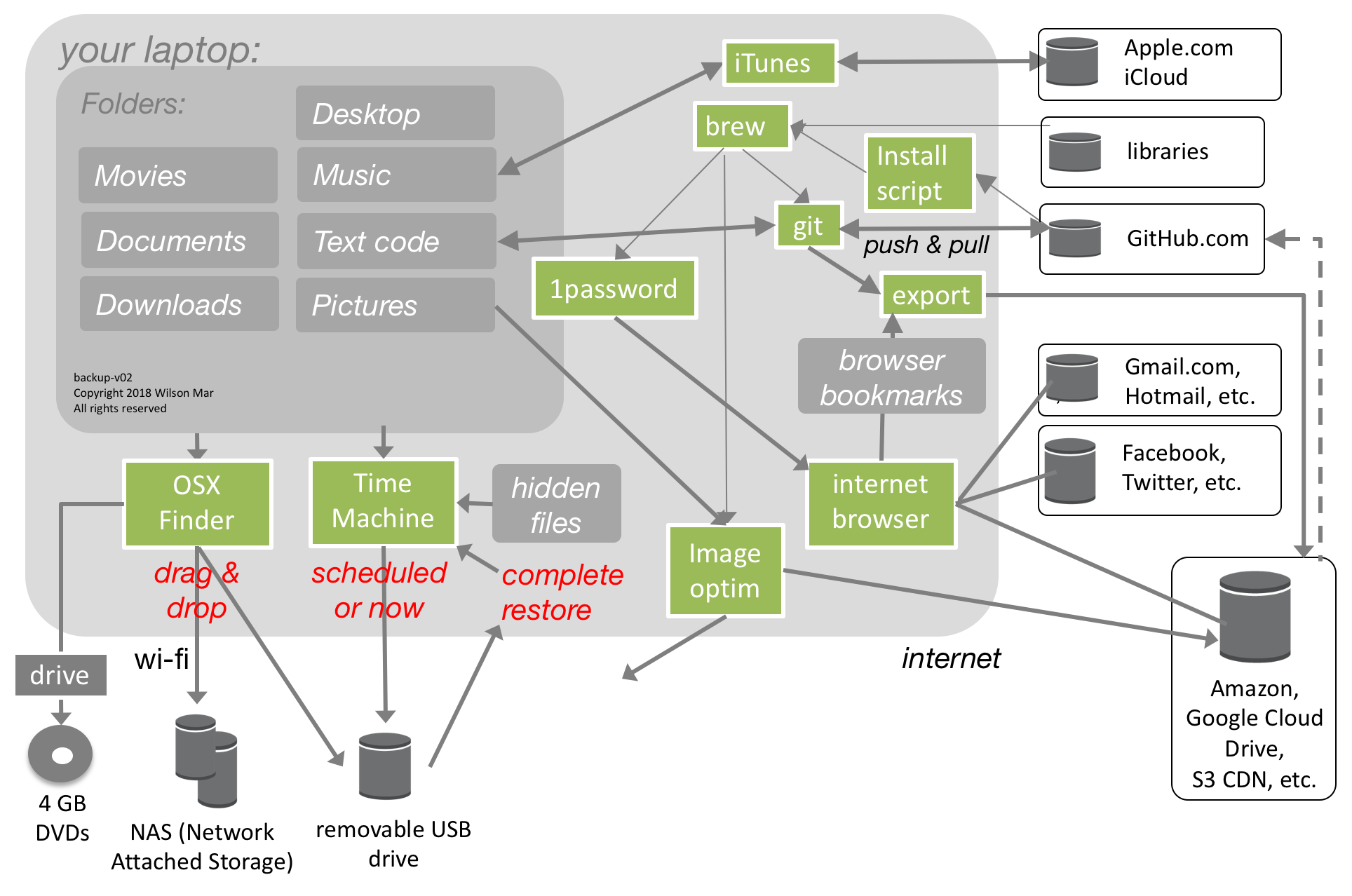 Most of us already have some type of cloud backups:

Those who write programming code or books now:

PROTIP: Being able to get back to various back versions of data is important because a virus or mistake can destroy files you don’t notice until months later.

If you buy a USB hard drive you plug into your laptop USB plug, you can drag-and-drop specific files to it. But you’ll need to manually save file names with different names in order to get back to back versions of Documents and Movies.

Burning DVDs disks provide the most long-term stable storage. BLAH: But each DVD is limited to 4 Gigabytes of data. Removable USB hard drives are now several thousand gigabytes (terrabytes), which are needed for those working with movies.

BLAH: With newer MacBooks, you’ll need to buy a DVD drive (about $150). However, if you buy a black Samsung DVD drive, you’ll be able to play Blueray disks on your laptop.

There are hidden files we don’t see on Finder that are required to create a complete backup that we can use to fully restore a laptop.

The Time Machine software that comes with Apple MacOS is one of its best features. It has the ability to completely rebuild on a new laptop from a backup backup drive because it automatically saves the hidden files we don’t normally see on Finder.

When we plug in a USB drive for it to use, we can click “Backup Now” or let it start backup automatically, in a “set-it-and-forget-it” mechanism.

It does incremental backups of just changes every hour for a day, every day for a month, and every week until the backup disk is full.

If it doesn’t have enough disk space, it will save a smaller number of previous versions.

There are number of other cloud offerings available.

Time Machine is not available on Windows machines. Windows 7’s Shadow Copy Service is lacking because it won’t help you when your disk crashes since it doesn’t also backup hidden system files.

So other programs need to be installed on Windows.

The Acornis backup program makes incremental backups of just the changes, but it doesn’t provide fall-back to different versions of the same file at different points in time. Also, Acronis is especially difficult to deal with due to their policy of hassling customers by not allowing software download after a short time, then providing no phone support.

This is also the case with programs to access cloud storage such as Dropbox and Amazon Cloud, which both keep a copy of files on your local machine.

Apple offers their Time Capsule device that contains a hard drive – a Network Attached Storage device (NAT) – that uses the network (wi-fi) to do backups automatically, without anyone having to plug in a USB portable hard drive.

But machines cannot be powered down because it runs automatically on a schedule such as once an hour or once a night.

Some are available with two disk drives which mirror each other for redundancy in case one of the drives break down.

Seagate’s NAS software is its ability to extract your photos and text from Facebook, Twitter, and your other social media accounts.

BTW, currently there is no easy-to-install program to extract emails from Gmail, Hotmail, and other free cloud email services.

iDrive backs up photos and other files on mobile devices.

This is a good option to reduce use of expensive cellular bandwidth usage.

There are more industrial vendors and devices:

The focus of this article is on consumer models.

3% a year is still a rather risky. Would you accept 14 out of 100 failures from your toilet or microwave oven?

BestBuy sells both Western Digital My Cloud and Seagate NAS. Amazingly, Amazon had the same price.

PROTIP: The devices make noise when operating, so have them all in a room away from where you want to sleep quietly. A sound-proof room where you watch loud movies?

PROTIP: Make the initial backup set by plugging in the RG-45 network cable into your laptop. MacBooks would require an additional adapter.

Both have a mobile app for iOS and Android that works on the common local wi-fi network.

PROTIP: You’ll need to keep your laptop running at night for this to happen

Both have DNLA capability to play back videos to a TV also having DLNA feature.

A 5 minute non-technical overview by a cheerleader:

WARNING: My Cloud connects to a wi-fi hub, so the backup device needs to be near the hub. That may be OK since you’ll want both plugged into a UPS to protect from electrical sags.

WD has its My Cloud mobile app for iOS and Android that works on the common local wi-fi network.

Complaints about this on Amazon and elsewhere include:

Links to videos and write-ups:

Each laptop requires a different user account. Folders cannot be shared, even by the administrator.

Seagate is faster than WD MyCloud.

Folders marked public are visible to all on the wi-fi, but not from the internet without a password.

The most frequent backup time is once per hour. No “backup now”.

The iTunes player doesn’t work. You have to use Seagate’s program.

Links to videos and write-ups:

Not all cloud storage vendors have geo-reduntant storage, which means they store data in two geographically separate locations.

A search on the internet for “cloud backup” will yield several sites compare various options, but it’s clear which vendor the site is rooting for, usually to collect a referral income. So use such sites only for ideas to differentiate the options, not to base your decision.

What are needed are not just backups, but Snapshots which add to backup data versioning and other metadata, usually taken more frequently than once a day.

Snapshots capture the state of and location of files and blocks that make up files at a specific time to which a customer can roll back. More than just a record of state, metadata includes deleted data, parent copies, and so on, which all need to be retained.

Backup suppliers have added encrypted, mechanisms that lock snapshots from being moved or mounted externally, and multifactor authentication (MFA) to access them.

The time spent by attackers inside systems – “dwell time” – averages 11 days according to Sophos and 24 days according to Mandiant. During this period, they will be carrying out reconnaissance, moving laterally between different parts of the network, gathering credentials, identifying sensitive and lucrative data, exfiltrating data, and so on.

rverless-authentication-boilerplate Kinda still get you what you pay for