Cucumber is an open-source server program that tests applications based on specification of that system’s features (behavior) written in the “Gherkin” language.

Cucumber is often used for what some call “User Acceptance Testing” (UAT) to determine if the system built should be accepted based on user specs defined in Gherkin. When written before development, Cucumber enables BDD (Behavior Driven Development).

PROTIP: Defining a full scope of features enables features to have a better naming conventions.

Examples of business functions are:

Additionally, each feature may have some error recovery features.

PROTIP: It’s better NOT to include the name of the app under test as part of the feature name in order to make the files more reusable with other apps.

Gherkin is used for “Black box testing” where the person executing the test does not get into the internal engineering of the app.

The Gherkin language is designed to be a “natural” (English-like readable) language designed to be understandable by business people (unlike coding in Java, Go, Python, etc. which are written for reading by specially trained programmers.)

Gherkin code can be edited with any text editor.

VIDEO: An Introduction to BDD (with Cynefin) by Liz Keogh (@lunivore) says BDD is an analysis technique. Her example [4:18]:

An example of a feature file (with .feature file suffix) which describes a single feature:

The Gherkin language is simple. It doesn’t require matching parentheses and semicolons at the end of each line.

Indentation is used to define structure. Like Python and Bash files, pound signs are read as comments and not parsed.

The sample above does not need to begin with a language specification because English is the default. Gherkin can be written in 60 languages. Feature files using the Norwegian language (“no”) begin with “Egenskap” instead of “Feature” in a header line:

Each feature can consists of one or more scenarios. Each scenario consists of steps specified by “Given”, “When”, and “Then” keywords.

Rules of Gherkin “Treetop” grammar are defined in the Gherkin language standard at , see https://cucumber.io/docs/reference

Thus, Cucumber bridges the “communication gap between domain experts and developers”. Cucumber enables text about what business people require to be executed as tests.

The behavior desired by a system are defined by Gherkin specifications that are executable.

Capybara is the part of Cucumber that acts like a user on a web browser. It is for “integration testing”. The Rails tools simulates how a user would interact with a website. Capybara puts applications “through its paces” by simulating a user and browser performing the steps of the scenarios – interacting with the app to receive pages, parse the HTML, and submit forms, just as a real user would.

By storing features in files along with different scenarios of feature use composed of many steps, and storing Ruby code in separate files containing step definitions that tests each type of step, Cucumber and Capybara automatically test the behavior of the SaaS app.

When the Gherkin interpreter encounters a keyword such as “navigate” and “search”, Cucumber looks into a subdirectory specifically called “step_definitions”.

Feature files can be executed by several software testing platforms:

The cucumber server can be started using a command such as:

In the US, green is used on street lights to indicate “pass”. Cucumbers are green. Thus the name of the software. Gherkins are small pickled cucumbers.

Send results to “status of done” dashboards such as SonarQube, Grafana, etc.

Send run information to Hygieia or other DevOps dashboards.

There is a Bash script that installs the various Cucumber modules on a Mac:

Cucumber consists of a set of software modules. When “cucumber” is specified among TEST_TOOLS, several modules need to be installed with it.

The arguments specify what features are run, referenced by the “$@” below:

Many Agile teams have embraced use of Gherkin language in a Behavior Driven Development (BDD) approach to software development.

Because Gherkin is a language common to both business people and technical programmers, those who know what needs to occur and developers who write programs. Thus, Gherkin enables collaboration among “Three Amigos”:

BDD is focused on what to test, not how to test.

PROTIP: A key part of BDD is the collaborative discussion among the stakeholders rather than silos not talking with each other. 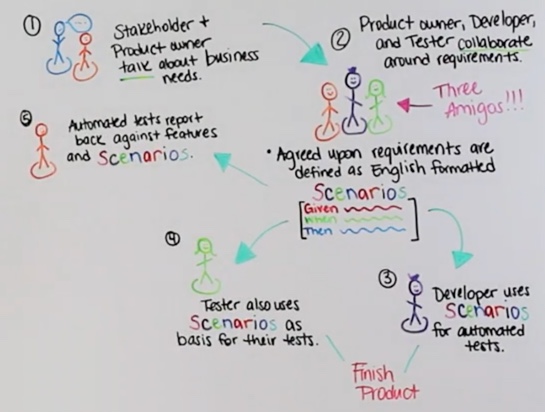 BDD works at a higher level than unit tests of the TDD (Test Driven Development) approach to software creation. As with TDD, the BDD approach builds software incrementally, by writing feature files that fail before writing code that makes the tests pass. In fact, it is an anti-pattern to write Gherkin after the software.

The “driven” part of BDD means that business people can specify what the computer should do in a way that can be actually verified. It’s more rigorous that the traditional approach of writing “requirements” documents (in Microsoft Word).

The team has a mechanism to define and verify what “done” really means.

This is a big time saver to business people because the automation enables everything previously defined to be verified again and again after even the most misicule of changes. This enables agility with quality.

THIS presents a good comparison between Behavioral and Functional statements (which reference HTTP codes).

Dan North (@tastapod in London UK) and Liz Keogh created a BDD framework, JBehave,[1] followed by a story-level BDD framework for Ruby called RBehave[9] which was later integrated into the RSpec project. https://relishapp.com/rspec The group also worked with David Chelimsky, Aslak Hellesøy (@aslak_hellesoy Norwegian in London), and others on “The RSpec Book: Behaviour Driven Development with RSpec, Cucumber, and Friends”. The first story-based framework in RSpec was later replaced by Cucumber mainly developed by Aslak Hellesøy.

The mapping between each step of the scenario defined in the Gherkin feature file and the code of each function to be executed is defined in steps definition file stores.

QUESTION: How is Gherkin different than Rules specified in rule-based systems?

How to test is the job of Selenium.

The first line of a Selenium program:

Selenium makes use of webdriver to control web browsers.

So Selenium is more suited to “end to end” testing, for example with  nightwatch.js.

Karma is a test runner designed for unit tests, so it is much harder to achieve end to end tests on it, you can add a phantomjs launcher, but it is not the same as real browser tests with Selenium. I think both of them can run any js testing framework if you have an adapter… Mocha, jasmine, qunit, etc…

In Visual Studio, highlight a scenario line and right-click to Generate step definitions.

Mocha is used for unit testing. It’s said that Mocha has better asynchronous support than Jasmine. Jasmine is used for end-to-end testing.

Jest, being from Facebook, at https://facebook.github.io/jest/ is focused on JavaScript-based apps built using Facebook’s React.

There are several ways to obtain a running instance of Cucumber, listed from easiest to most difficult:

B) Pull an image from Docker Hub within a Google Compute or AWS cloud instance.

C) Use the Dockerfile to build your own Docker image containing JMeter.

D) Use Homebrew to install JMeter natively on you Mac.

CAUTION: If you are in a large enterprise, confer with your security team before installing. They often have a repository such as Artifactory or Nexus where installers are available after being vetted and perhaps patched for security vulnerabilities.

Cucumber server software was written in the Ruby programming language. Ruby is the “R” in RSpec, which defines the language grammar.

So Cucumber is supplied as a Ruby gem.

Within that file, the keyword “Feature” is on the first line.

PROTIP: Some teams find it useful to hold a feature brainstorm session to identify as many features as they can think of right away, to get all ideas “on the table” before diving into more detail.

The team would then be in a position to assign various tags to group features in order to tease out duplicates and to classify each feature as:

Tags are “arbitrary” in that they can be about any category.

@ignore is recognized as a feature not to be executed during testing.

@weekly, @hourly, @daily, @yearly, etc. identify when they are executed.

Other tags, for example:

Ideally, each feature should be independent of and isolated from others. So a feature can include several steps to perform.

The team then can dive into estimating and elaboration.

Scenarios are examples of expected system behaviors. Each scenario describes a particular situation that uses the feature.

Sentences not starting with any of these keywords are treated as comment documentation. A fanciful example[1]:

There are other keywords:

Background - to avoid repeating givens in all scenarios.

PROTIP: Instead of English words, French, Japanese, and other words can be used with installation of the target translation. This is because Gherkin is known as a Domain-Specific-Language (DSL).

SpecFlow is an extension installed into Visual Studio. SpecFlow features are

A User Story is a low fidelity (inexact) description of a use case.

Mukesh otwani at https://learn-automation.com created a series of videos about Cucumber

Greg Bee takes issue with their REST API example containing HTTP GET and JSON, then presents a more readable version with explanations:

Ripon Al Wasim (https://twitter.com/riponalwasim”>@riponalwasim</a>) released through Packt on 12/23/15 the “Mastering Selenium Testing Tools” video course. It is also available via Udemy and LinkedIn/Lynda.

An Introduction to BDD by Konstantin Kudryashov of Inviqa

What is BDD? What is Behavior Driven Development? Development That Pays

Introduction to BDD with Cucumber Conygre

What is BDD (example with Cucumber)? QAShahin

BDD all the way down by Enrico Campidoglio FooCafe