Many are familiar with this website: “the-internet” running on herokuapp.com

The website was created by Dave Hoeffner to present 43 controls which provide challenges to those learning to code Selenium scripts that automate manual actions real users perform on an internet browser (such as Google Chrome). Dave created the site as the basis for his tutorials at ElementalSelenium.com and SeleniumGuidebook.com.

to see the sample app’s UI on-line at https://the-internet.herokuapp.com/

to view JMeter XML scripts for the control.

to view the Flood Element TypeScript at
https://github.com/flood-io/element/tree/master/examples/internet-herokuapp

to view a video about manual actions and analysis of the UI page source code as the basis for test script creation.

Additional columns of icons may be added to show sample run results for each test item.

NOTE: Some scripts are under development.

Below is the narration (transcript) of the video above.

Selenium makes use of older “Web Driver” APIs that control browsers from code written in a variety of programming languages.

But the new Google “Lighthouse” API exposes a comprehensive set of metrics that include performance timings for every manual action. They’ve been added to the “Audits” section of Chrome Developer Tools UI we’ve been using to figure out the classes and identifiers we code into Selenium scripts.

But since these “Lighthouse” diagnostics require manual effort each time, it can be tedious to keep repeating manual actions during each regression test. So we create scripts to automate manual actions in the Typescript programming language run by the Flood Element program. The program is installed locally using a shell script.

Typescript is a superset of the JavaScript programming language that control browsers. Typescript is used because its transpiler checks for errors sooner than JavaScript.

After scripts are git pushed to a remote GitHub repository, others can git clone onto their machine to run.

Both Element CLI and Selenium control a single user GUI at a time. But we also want to see what happens when many users on many browser instances run at the same time exercising the website. We want to see how much each JavaScript control can impact both the client and server environment’s memory, CPU, and other resources. «<

But we don’t want our experiments to overload Dave’s public site for everyone else.

So we run the app as a Docker container within the AWS or other cloud. The container and environment under test is built by invoking a build script that retrieves files from GitHub which makes use of a Docker image housed in Docker Hub and uses it to instantiate an app server for testing. It uses credentials for an AWS account associated with the appropriate groups with applicable permissions and roles needed.

We use the Flood.io service in the cloud (or on-premises) to emulate those many users by running automation scripts pulled from a GitHub repository.

Flood Element scripts are a new innovation because it emulates manual actions within each user’s browser. Historically, Java code used by JMeter or Scala code used by Gatling emulate load by simply emulating just the exchange of what is sent between client browser and server. But a lot of work now occur inside the client browser.

Multi-user Flood runs are controlled by run parameters such as the number of virtual users being emulated. Run shell scripts can be used to manage various runs, test data, and results over various variations in run conditions.

It’s important to have a metrics dashboard that helps people make sense of measurements collected over time. This article talks about use of New Relic.

We have an instrumentation script which installs an agent (newrelic-infra) to run alongside the app. Because the sample app under test was written in the Ruby language, the agent is installed as a rpm file (newrelic.rpm) specified in the Gemfile referenced during installation.

During runs, the agent sends notifications about events to a process installed using a Docker image in Docker Hub from New Relic. The monitoring process transfers events collected by agents to a metrics dashboard at newrelic.com.

To validate communications, a license key obtained manually from the New Relic website is installed when the agent is installed.

The license key, plus IP address and port number of the metrics collector are provided to Flood so that it can add its metrics to New Relic over time. These metrics include the number of users, transaction response times, the rate of transactions per second processed, network bandwidth throughput, and transaction pass/fail error rates.

When we also add the cost of each run, we would be able to identify which configurations would provide the most profitable number of transactions per dollar. 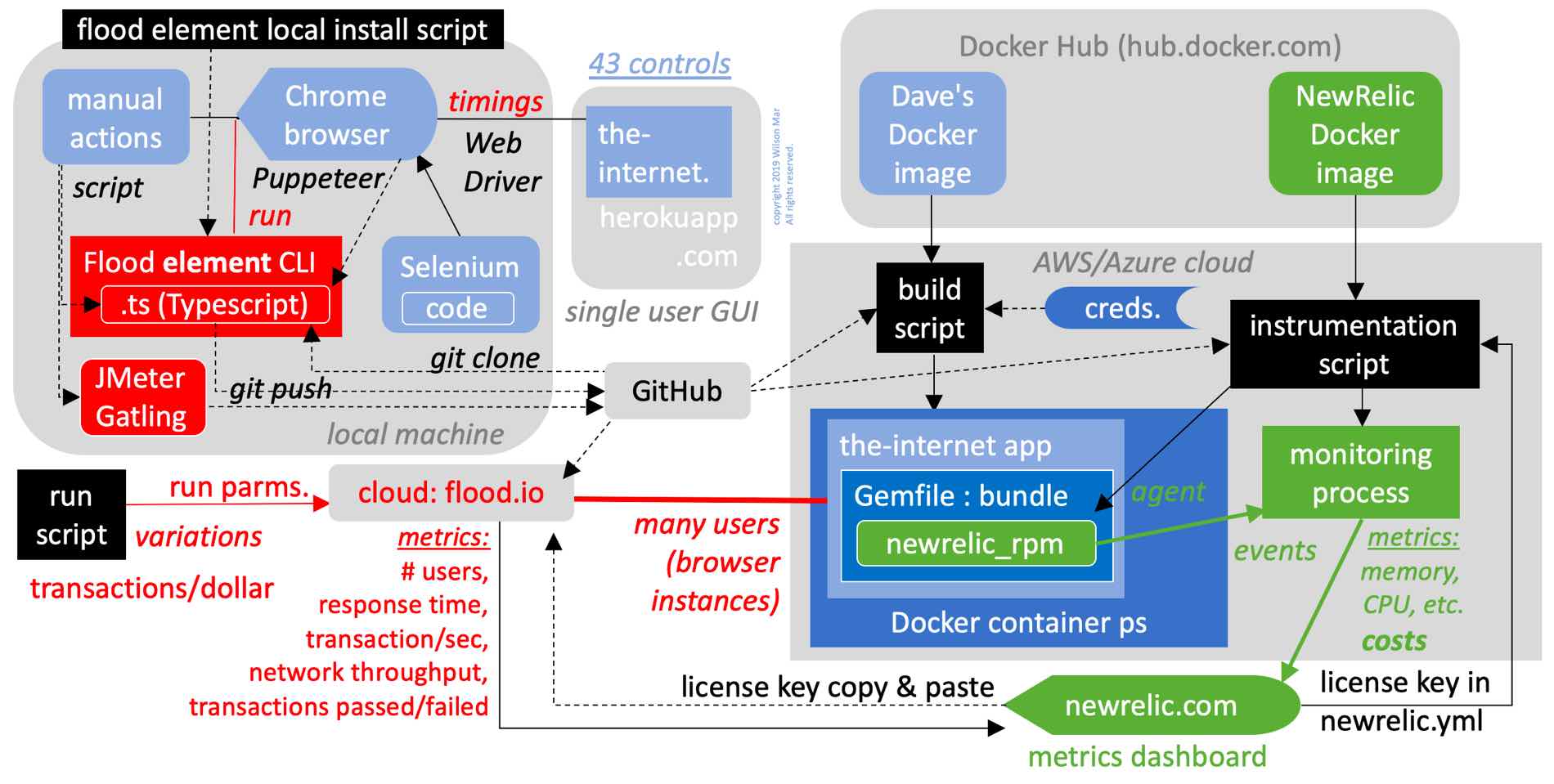 While learning on a local machine such as a Mac, Linux laptop, or Windows PC:

These steps are done manually on your local machine.

How To Manual Steps

Here are the manual steps to make use of instructions in this tutorial:

NOTE: This assumes that you know how to open and use a Terminal program on a Mac or a Git Bash on Windows.

Dave Haeffner spoke about his “the-internet” in 2015 part 1 and part 2 of “Selenium Test Automation: Practical Tips & Tricks” presentation recorded in Israel. In his May 2016 “How to use Selenium successfully” slidedeck he said:

"An example application that captures prominent and ugly functionality found on the web. Perfect for writing automated acceptance tests against."

Many of the issues addressed above also need to be addressed by any app automation tool.

Typescript is a superset of the JavaScript programming language that control browsers. Flood Element makes use of the Typescript language, which transpiles to JavaScript. Typescript is used because its transpiler checks for errors sooner than with JavaScript.

Rather than directly referencing application control IDs, so that when an app changes, just one change is needed to make all tests pass again. This is like Selenium

Similarly, Base Page Object library to migrate commands from one version to another.

On an internet browser such as Google Chrome, Apple Safari, or Microsoft Edge:

Run flood against app in AWS under instrumentation

This step runs a shell script file at
https://github.com/wilsonmar/DevSecOps/master/flood-io/flood-run-e2e.sh

It is customized from an example in Flood docs.

Questions about several other dimensions, such as:

In today’s ransomware environment, we all need to be extra vigilant to ensure security.