This is a quick step-by-step introduction to the Go programming language (GoLang).

Go is an opinionated language:

Before downloading, consider the environment variables which define where and how files get downloaded onto your machine.

When Go is installed, several environment variables are defined.

Generally a Go workspace is created for each project, with three sub-directories:

Instead of git clone

Use the equivalent of “git clone” to download slides and code to the “Testing in Go” video class by Brian Ketelsen:

The command above sends files to the $GOPATH folder path:
/Users/wilson_mar/gopkgs which is $HOME/gopkgs
$HOME/gopkgs/src/github.com/bketelsen/testingclass folder.

$GOPATH by default points to the $HOME/go directory in UNIX and %USERPROFILE%\go on Windows.

Hence, it is not absolutely necessary to setup GOPATH environment variable.

GoLand was built especially for the Go language, from JetBrains, for $80 after a 30-day trial. Install using

However, shortcuts and reformat for Go are provided for text editors:

PROTIP: Like Python has “Pythonic”, “Gothic” is the adjective identifying idiomatic Go code (the easiest and most common ways of accomplishing a task using native language constructs rather than porting assumptions from a different language). See the “Idiomatic Go” blog by Dmitri Shuralyov (@dmitshur), who wrote githubv4 client library for accessing GitHub GraphQL API v4.

Although unveiled in 2009, companies who have adopted Go in their products include Atlassian, Docker, Facebook, DigitalOcean, Cloudflare, eBay, Heroku, HashiCorp, Capital One.

PROTIP: The canonical list of companies using Go is at
https://github.com/golang/go/wiki/GoUsers

A 2016 survey found that 40% of respondants used the language for less that 1 year.

When asked what they like most about Go, users most commonly mentioned Go’s simplicity, ease of use, concurrency features, and performance.

What changes would most improve Go? Users most commonly mentioned generics, package versioning, and dependency management. Other popular responses were GUIs, debugging, and error handling.

There are many good examples of Go programming code on the internet. Among the better-known repositories to consider:

PROTIP: When you create a new go source file, also create a companion _test file* for “black box” unit testing of each function:

Within the _test.go file, for example:

Test begins the name of every test function so that you can name specific tests in command such as:

t.Name reflects the name of the test in messages.

t.Log and t.Logf outputs a message without setting result status.

The “f” as in t.Logf and t.Errorf and t.Fatalf specifies formatted use of %v for strings. Like other printf functions, an escaped new line \n is needed.

t.SkipNow skips the test with no message. t.Skip outputs a string. t.Skipf outputs with variables.

PROTIP: Using assert statements with variables enable you to copy and paste and code less. This also makes it more readable.

t.Cleanup registers a function (meaning it won’t do it right away).

t.RunParallel is added for faster runs.

TDD and other techniques

https://github.com/gavv/httpexpect for testing over the network

Vendor prior to Modules

When Go was first released, it provided no mechanism to manage different versions. Vendoring was the first system supported by the Go Core team. In Go 1.12 and before, Go looks in the “vendor” folder before looking in GOPATH for a stated import.

CAUTION: Avoid importing modules from sources you don’t know if you can trust.

PROTIP: Many developers type code from the first character because they let formatters automatically take care of proper indentation.

Go was created with a rich set of packages built-in in its standard library.

If you get error message “cannot find package” when running a go program:

PROTIP: Don’t install packages under where Go is installed. This is so you won’t have problems after you upgrade to the next version.

For better, many prefer to use only stdlib features.

The most popular packages for Go as found searching through all of GitHub: So although extensive, many have found the documentation lacks clarity and the library difficult to use. Marcel van Lohuizen (@mpvl) worked on it alone on a 50% basis at Google Vienna. VIDEO: In 2017 he was working on date localization, with bidi (bi-directional) and gender in the future.

https://github.com/nicksnyder/go-i18n by Nick Snyder is an easier way to localize Go apps. It supports (with good documentation):

However, go-i18n (at time of writing) does not support gender rules or complex template variables.

VIDEO: “Internationalization is a Piece of Cake” by Eli Schutze Ramirez CLDR (Unicode Common Locale Data Repository) contains all aspects for each BCP47-defined locale. ICU provides a wrapper to CLDR. Do not build sentences yourself. Let the program arrange word order to the locale.

Pave Loborin’s repo shows (in Russian) how to use the Sprintf function to translate for localization.

Instead of ICU is still not powerful enough.

All the CVEs (Common Vulnerabilities and Exposures) reported for Golang into the NVD (National Vulnerability Database). Each CVE may be linked to a CWD (Common Weakness Enumeration) within underlying code such as cwe-444.

The Go language was invented within Google
by Robert Griesemer and Unix luminaries Rob Pike and Ken Thompson.[1] 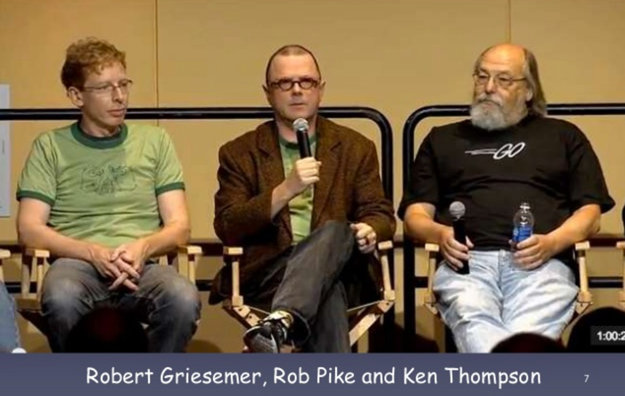 TJ Holowaychuk is perhaps the most visible defector from Node, as he wrote Node. See https://goo.gl/WVxwtb

Todd McLeod presents his deep knowledge in a laid-back style so it’s like listening to him at a party:

On web servers, many Go gurus say just use sub-routers using stdlib net/http instead of encapsulating all routing decisions into one single component using <a target="_blank" href="https://godoc.org/net/http#ServeMux">http.ServeMux</a> or Not even <a target”_blank” href=”https://github.com/julienschmidt/httprouter”>httprouter</a>

Some like Echo at echo.labstack.com. Some resources on Echo:

Numbers are not permitted at the start of an identifier (variable).

Go has an array type, but most interactions are with slices which are built off arrays. I don’t worry too much about the name and just use them The specification for slices are “[]T” where T is the type. So “[]string” is a set of strings, “[]int” is a set of integers, and so on.

int is actually an alias! Like C, Go has signed and unsigned integers:

When working with unicode you should be converting your strings to []rune. That’s why the utf8 package is so sparse, most things are covered by []rune conversion and the unicode package. The utf8 package is like a very thin abstraction layer for using strings as []rune.

All source code in Go is UTF-8, so you can use an emoji, Japanese Kanji, or other language in variable names:

“External” Tests are in a separate package (scope) than the code being tested, such as in documentation. External test names are suffixed with “_test”. Due to its external nature, identifiers must be prefixed by the package identifier.

Agouti is an acceptance testing framework for Go.

backtrace.io/go/ Reduce your time to resolution. Go beyond stacktraces and logs. Get to the root cause quickly with deep application introspection at your fingertips.

Output a cover profile as you are testing a package, then use go tool to visualize them on a browser.

https://github.com/uartois/sonar-golang Sonarqube plugin for the golang language created by Falque Thibault with 34 rules from GoLint.

The program is influenced from Tarek Ziade’s tool at tarekziade/boom.

It was written by Google for use in its Google’s Scale and Load Balance Instances and Apps tutorial.

Monitoring is achieved by other means.

@cool_golang is a bot that automatically retweets any mention of #golang on Twitter.

Google App Engine is a serverless compute platform that is fully managed to scale up and down as workloads demand. Cold Start (zero instances running) request initial response times are often between 80 and 1400 milliseconds. Hot (at least 1 instance running ) requests are fulfilled immediately.

Google Qwiklabs “Getting Started with Go on Google Cloud” has 5 steps:

Stephen Grider (ste.grider at gmail) created his highly-rated Udemy “Go: The Complete Developer’s Guide (Golang)” in 2017 and has kept it maintained. It contains 9 hours of videos. Code (edited using VSCode) and diagrams for the course are at https://github.com/StephenGrider/GoCasts. Within each numbered folder, click on its diagrams.xml file, then “Raw” button for its URL.

In https://www.draw.io, for “Save Diagrams To…” click “Decide later”. Click menu File, Import From, URL. Paste the link. Press Enter (click Import) for the diagram to appear. Click on the tabs at the bottom of the window. You can then save the file. Click File, Close, Discard changes. For the next file, change the chapter number in the URL and repeat this paragraph of steps.