Distribute load to scale and upgrade servers with no down time. Also route transactions across clouds using ZeroLB

The contribution of this article is a deep yet succinct hands-on step-by-step tutorial which is logically sequenced, with “PROTIP” marking hard-won, little-know but significant facts available no where else on the internet.

Why - Who Needs Load Balancing?

Even if a single server can handle current load, it is still a good idea to design and test your system to use a load balancer to distribute load so that the cluster stays up.

Having your applications on more than one machine allows operations personnel to work on one machine while the other is busy working.

Having “fault resilience” means that an alternative server can take over when, inevitably, a server crashes or just needs maintenance work done.

This is called ensuring uninterrupted continuous avialability of mission-critical applications.

It’s also a good idea to test your system for its ability to handle growth when it’s still fresh on developer’s minds, since load balancing and fail-over issues can be quite complex.

The oldest load balancers operated at network level 4 (L4), which route based on IP address.

Newer “application” load balancers, operating at network level 5 (L7), allocate traffic based on the URL, such as routing to web vs. API servers.

The Trouble with Load Balancing

Load balancers may not evenly distribute load among active machines in the cluster. This can happen for several reasons:

Session stickiness. Once the IP of a client gets assigned to a particular server (at Login), it stays with that server until the session ends. This is the case with SAP SAPGUI R/3 application performance tuning

Session stickiness is inherently fragile because the backend hosting the session may die.

Also, since each session poses different levels of load, load balacers which allocate based on frequency of allocation (such as round-robin algorithm) may over-allocate sessions to a server which ended up with users and sessions who consume a higher-than-average amount of resources.

Algorithms for allocation/splitting of traffice include:

PROTIP: Monitor in real-time the load on each individual resource in a pool. Also measure the extra time load balancers take.

Use of a load balancer takes an extra hop in the network, which adds latency.

Such progress can be made with new “decentralized” applications using the Service Mesh> architecture pattern working within Kubernetes, which deploys (bootstraps) intelligent proxies as “sidecars” running in each pod alongside each app container.

Decentralized microservices apps Dockerized for running in containers make all network communication through its sidecar proxy (like handing a box to UPS to deliver).

This approach also enables security-related policies to be applied (such as limiting outflows from some countries) and detection of zonal failure and automatic rerouting around traffic anomalies (including DDoS attacks).

Each sidecar proxy and backend service report periodic state to the global load balancer (GLB) so it can make decisions that take into account latency, cost, load, current failures, etc. This enables centralized visualizations engineers use to understand and operate the entire distributed system in context.

This means app developers no longer need to bother coding for a long list of operational cross-cutting concerns:

Embedding the above functionality in each app program may provide the best performance and scalability, but requires polyglot coding to implement the library in many languages. It can also be cumbersome to coordinate upgrades of new versions of each library across all services.

There are several sidecar programs:

Logically, communication of packets/requests travel through a “data plane”.

There is also a “control plane” which, rather than exchanging packets/requests, traffic in policies and configuration settings to enable services such as: 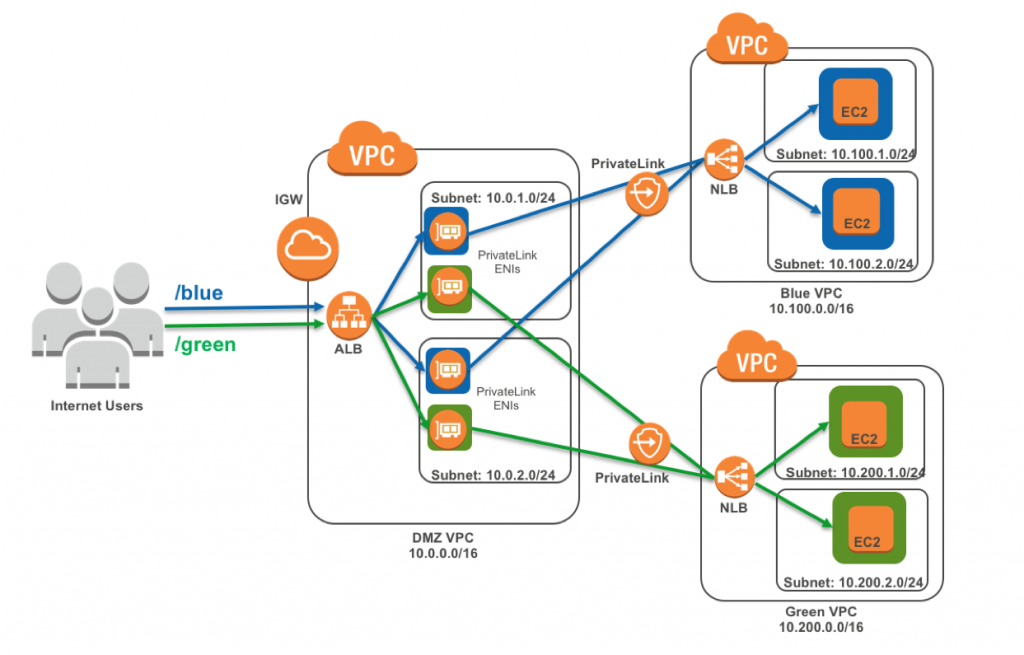 Scheme: internal: In Security group of targets in a private subnet, only allow inbound traffic only from the load balancer (in a specific security group ID).

VIDEO: One rule for each app group, defined by up to 100 rules:

VIDEO: ALB Ingress Controller for Kubernetes routes requests to different services in the cluster based on host, path, or other advanced request routing feature.

There is a 1 MB limit on Lambda request and response bodies. Lambda functions and ALB must be in the same AWS account.

Workload Metric: ConsumedLCU is based on the highest among metrics during each given hour:

External (Route 53) checks health of each ELB IP from the world. Failing IP health checks are removed from DNS.

NLBs routes based on “flow hashing”.

Name each LB running (as EC2 instances) with prefix “LB-“: 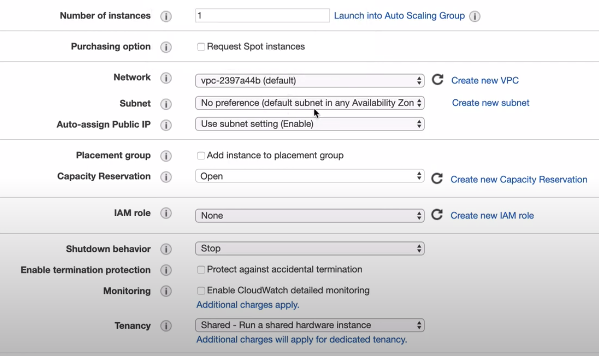 In Advanced, specify an Apache shell script to run on start to create a folder for what it processes, then show a message:

PROTIP: For “Zero Trust” strategy, do not have LB handle HTTPS termination internally - use HTTPS throughout. Redirect HTTP to HTTPS. 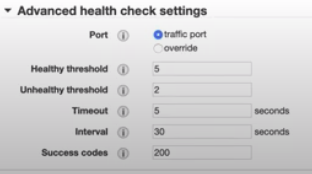 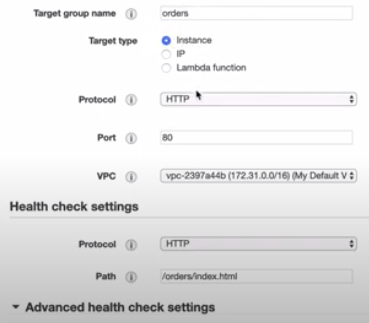 LBs can handle application traffic in a single or multiple Availability Zones.

Apps need to add back-off on failure (up to a point of abandonment).

There are several basic types of load balancing:

The problem with “round robin” is that it blindly hits each server regardless of its ability to accept work. This scheme requires every server to be homogeneous (nearly identical).

RRDNS is not recommended because it places load balancing outside the organization to authoritative DNS servers which caches DNS A entries. Changes to those entries can take a long time to propagate throughout the internet.

Microsoft’s NLB service can take up to eight seconds to redirect load. How To Set Up TCP/IP for Network Load Balancing in Windows Server 2003 notes that

TCP/IP must be the only network protocol present on the cluster adapter. You must not add any other protocols (for example, Internetwork Packet Exchange [IPX]) to this adapter.

Because traffic enters the network, network load balancing cannot withstand moderate Dos (Denial of Service) attacks as well as large-capacity front-end network appliances which detect ad filter out malicious traffic before it gets to the server.

Such “server-based” load balancing is done either by an application running on a regular server or an appliance.

* Using regular PC machines (on standard operating systems such as Windows or UNIX) has the advantage that it can be replaced (after configuration) with another machine that is familiar to the staff. There is less hassle from dealing with another vendor.

Vendors of such an approach include Resonate, Rainfinity, and Stonebeat. * Using dedicated appliance hardware has the advantage of speed, since they use specialized Application Specific Integrated Circuit (ASIC) chips. They "have internal-bandwidth backbones capable of handling a Gbps worth of traffic."[2,p31]

Vendors of such an approach include F5, and Radware. "Firewall load balancers tend to max out at around 70 to 80 Mbps"[2,p9,60] BigIP from f5 also compresses (for HTTP 1.1), encrypts SSL network traffic, and centralizes the SSL key store onto a single machine.

However, an individual central dispatcher can become a single point of failure. So:

A hot spare is a machine that’s configured as a mirror image of the machine it replaces if that fails. It’s also called a passive node if it sits unused until it’s need to support a failover.

This communication can occur over a serial cable between two machines.

Multicast can span several subnets, but they must reach their final destination after a network latency of no more than 200 to 300 milliseconds.

The passive node takes over (assumes “master” status) when it does not hear the “I’m alive” heartbeat from the other machine.

Because failover can cause a VIP to be the destination address at different devices at different times, a VIP can be called “floating”.

Failback occurs when the failed server comes back online and takes load back from the failover node. This happens after a transfer of client state information.

To avoid “bridging loops” when each load balancer thinks the other is inactive, the ISO Level 2 Spanning-Tree Protocol (STP) is used to set a cost for each port. This provides a way to block multiple paths by opening only the lowest-cost port (the highest-priority port). However, “STP is almost never used since it can take 10 seconds or more to react. Typically, a proprietary variation of a hot-standby protocol is used.”[2,p59]

CAUTION: Proxies forward both client requests to servers and server responses to clients, so unless they can handle as much throughput as all the machines in its subnet, it can easily become a throughput bottleneck.

Note: Although not necessary for production work, “Individual Pass-Though VIPs” are requested/defined so that for performance measurement and troubleshooting, individual servers can be reached through the load balancer.

There are several distinguishing features among load balancers:

“Flat-based” IP typology means the VIP and real IPs are on the same subnet (usually behind a firewall). FTP and streaming applications use this typology along with Return Path DSR.

More advanced load balancers enable the VIP to be on a different (more private/secure) subnet than IPs on servers receiving traffic. In this case, the load balancer acts as a gateway between the two LANs.

This is achieved with NAT (Network Address Translation). (RFC 1631) which enables real servers to hide themselves as non-routed RFC 1918 addresses.

But this only allows one pair of load balancer machines.

Load allocation algorithms within daemons (or windows services), which dynamically:

1) listens for a “heartbeat”; or
2) periodically sends ICMP ECHO_REQUEST to measure RTT (Round Trip Time) “pings”; or
3) detect the status of bandwidth usage or CPU utilization on each server; or
4) counts the number of connections active on each server. </ul>

BEA Loogic 8.1 is server affinity that reduces the number of RMI sockets.

SAP R/3’s login balancing (SMLG) clustering technology makes the decision of which server receives a user for login based on the number of users currently logged in and response time, (not how many work processes are used at any moment).

Once a SAP user is logged on a particular app server, the user session is pinned to that server. Background jobs are also assigned to a server, but a new job might get assigned to another server.

failover automatic repartioning of client traffic among the remaining servers in the cluster so that users experience continuous performance Quality of Service (QoS).

Within the BEA WebLogic 8.1 HttpClusterServlet Plug-in, sessions are attached to a particular server by the client’s IP address. This means that a server must stay up until all sessions finish (which can take many minutes).

A failover mechanism must have an awareness of the progress of all activities so that client sessions can continue to complete if processing stops.

IP Multicasts are sent by each WebLogic server to broadcast their status. Each Weblogic server listens for the one-to-many messages to update its own JNDI tree.

Direct Server Return of traffic back to clients

More sophisticated load balancers use “Bridge-path”, where the load balancer acts as a Layer 2 bridge between two LANs. However, this only works with flat-based nets.

Most sophisticated of all are when real servers (especially streaming and FTP servers) can bypass going back to the Load Balancer and send responses directly to clients by using Direct Server Return (DSR). This is desirable because “web traffic has a ratio of about 1:8, which is one packet out for every eight packets in.”[2,p26]

DSR works by configuring the IP alias on the server’s loopback interface “lo” with the IP address of the VIP. This is done using the ifconfig command on Unix.

The server needs to still bind to the real IP address as well so the load balancer can perform health checks on the sever.

The default route path of the server needs to point to the router rather than the load balancer.

Load Balancing in the Cloud

The internal processes (life-cycle) of a "redundant, self-curing, and self-scaling" computing facility are