This article describes the automation used to install and run a “non-trivial” sample system for use in analyzing cloud-based build and auto-scaling tools plus Azul java compiler diagnostics and container-level tracing such as Amazon X-Ray, etc. that measure the extent of elasticity and resilency promised by the design pattern defined by the reactive manifesto for more tolerance to failure.

The sample app was created by Justin Menga (mixja on GitHub) for use in his video course “Docker in Production Using Amazon Web Services” released by Pluralsight on 1 Dec 2017. This article assumes that you have a paid subscription to Pluralsight.com (less than $300 USD per year). His course is rated as 10 hours, but it took me more like 40+ hours of repeated viewing, study, and scripting because Menga’s tour de force covers most of the intricacies one needs to know to be effective in a real job as an AWS Cloud Engineer. 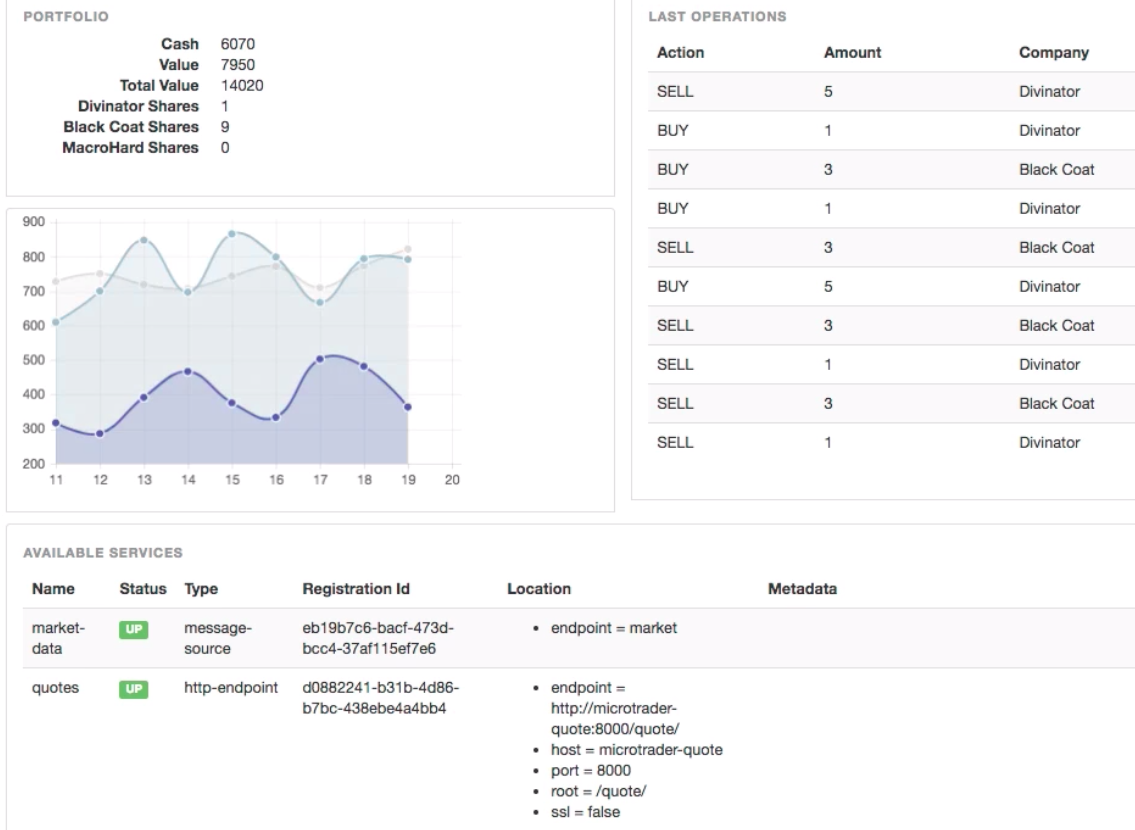 This UI is generated by the Trader Dashboard microservice component. 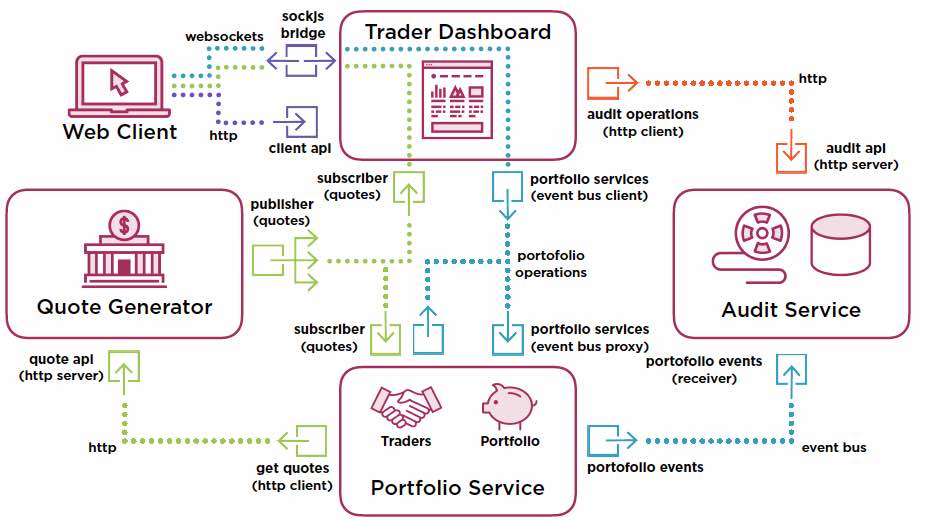 Each “microtrader” app process is built to run as a “Fat JAR” as a single deployable and runnable artifact within Docker containers.

Dotted lines between microservices in the diagram above represent modern asynchronous message-driven communications through an event bus provided by Vert.x. Callbacks within each app component use the Eclipse vertx.io that is open-sourced at github.com/vert-x3 [wikipedia]. It was programmed in Java by Tim Fox in 2011 while he was employed by VMware. In January 2013, VMware moved the project and associated IP to the Eclipse Foundation, a neutral legal entity.

WARNING: InfoQ’s JVM Trends for 2019, the editorial team predicts “vert.x will not progress past the EA (Early Adopter) phase, due to it’s relatively niche appeal”.

An alternative is Micronaut, a JVM framework for building fast, lightweight, scalable microservices applications in Java, Groovy or Kotlin. It is inspired by Spring and Grails.

There are dozens of little settings one has to get right to get it all working in production. So here are notes on how to do it by automating commands suggested by several resources.

Dockerizing apps and running them as containers are standard DevOps practice. But there are many options to run Docker workloads. This article currently covers uee of AWS cloud and its IAM and ECR image repo service, but using ECS rather Amazon’s multi-zone Elastic Kubernetes (EKS) or Fargate (Kubernetes as a Service).

PROTIP: To simplify, I’ve created several shell scripts (in GitHub) that gets it all done instead of manually typing after stopping and rewinding videos to specific spots.

A. microtrader-setup.sh installs on MacOs the 4 microtrader processes after building them from source and testing them using mocha.

B. ecr-setup.sh creates within AWS Docker images in a private Elastic Repository (ECR) and configures Dockerfiles for use in ECS (Elastic Container Service).

PROTIP: Since there is a flood of responses, there is a provision in the script to output to a logfile.

“Production” in the blog (and course) title means that we need to cover integration of a large set of components from vendors who don’t necessarily talk with each other. The products needed are listed alphabetically here, with links to my blog about it or the vendor’s marketing page, plus the version shown I am using (and the one in the video course):

Menga’s course from 2017 identified this workaround, which is no longer needed:

Since its release back on 1 Dec 2017, some changes have occurred in AWS technologies and workflows. However, Justin has continued work on the 17 repositories under the docker-production-aws GitHub account, which I’ve rearranged below alphabetically:

DOTHIS: In GitHub, watch each of these repositories:

Click “Exercise files” on Pluralsight.com downloads a folder named “docker-production-using-amazon-web-services”. Its sub-folders contain pdf files within folders of just numbers. So I’ve named chapter names and put them all in one folder:

The release pipeline automates the workflow to a Release Environment. commit to a Test Environment, performs unit testing, builds, and 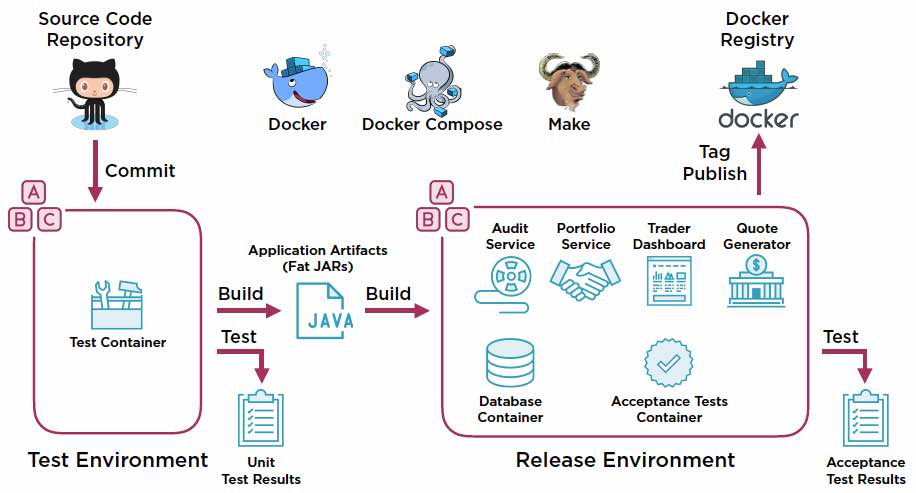 Getting EC2 Key Pairs and keeping them on your laptop is both risky and a hassle.

It’s more secure and flexible to define (in IAM) groups associated with policies by role. When a user is assigned to a group, he/she gets all the permissions for roles in the group. 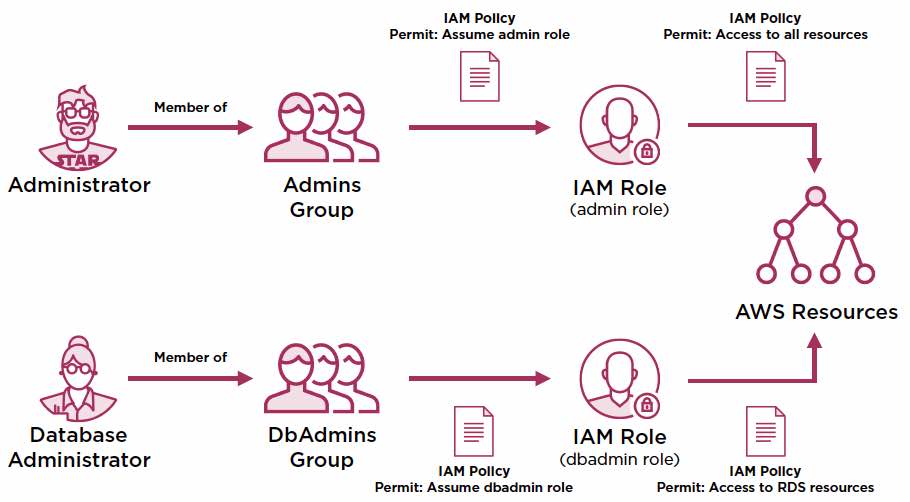 06 - Running Docker Apps in EC2 from ECR in ECS 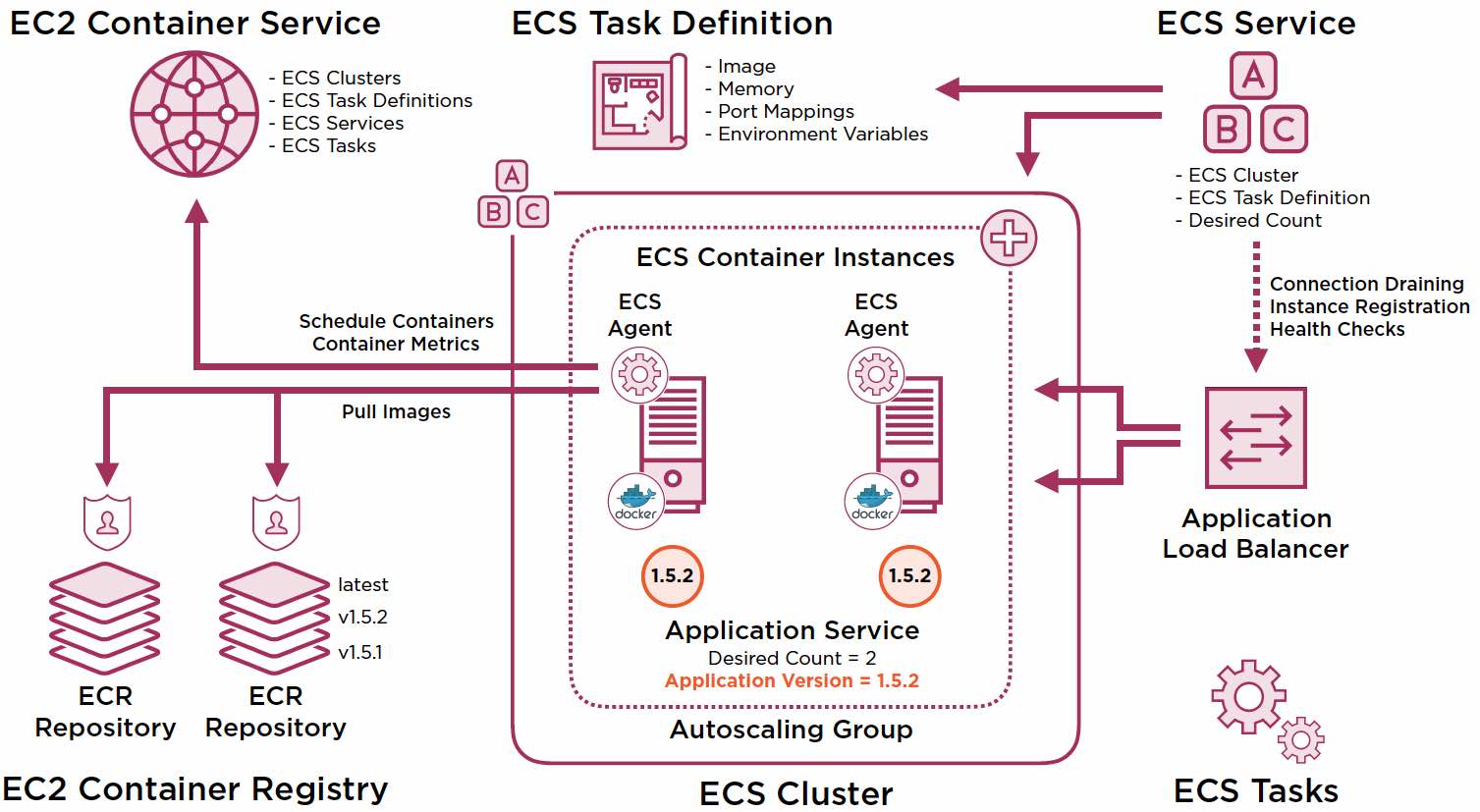 ECS is like docker-compose. It supports rolling deployments to maintain the Desired Count based on status from the Load Balancer.

PROTIP: TODO: I’m in the process of creating a script that automates the manual steps shown in Justin’s videos:

Triple-click the following command to highlight the whole line:

… then copy it for pasting in your Terminal CLI to run it automatically.

The steps to publish and run Docker apps using ECS:

To create a custom AMI based on ECS-optimized AMIs: 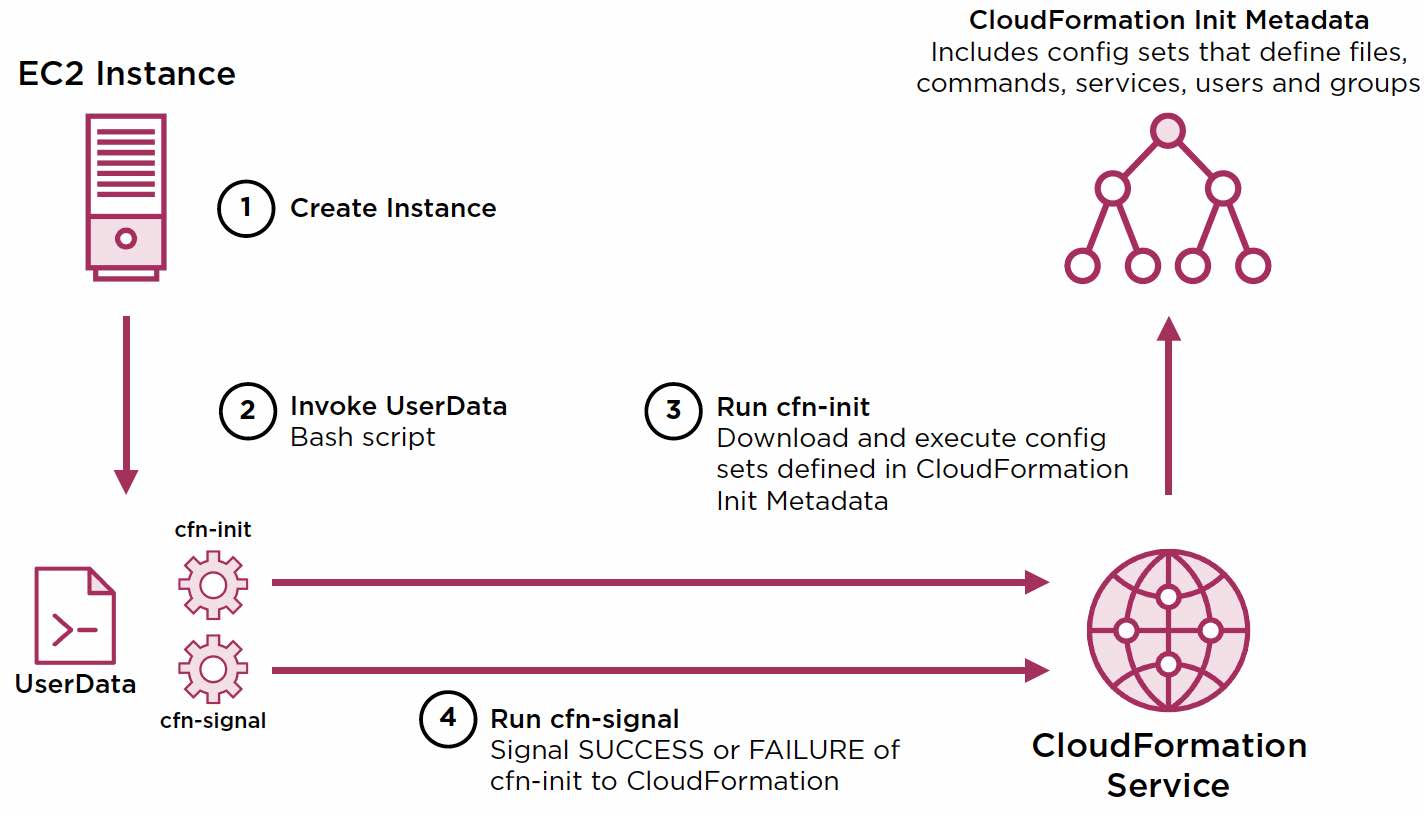 The aws-cfn-bootstrap yum package is installed by the install-os-packages.sh bash script.

From the repo we use file files/firstrun.sh to do the same but also define the $PROXY_URL to a HTTP Proxy that denies traffic to malicious sites and allows traffic to trusted sites. In file /etc/sysconfig/docker we specify the Proxy URL the Docker Engine uses when pulling images from the EC2 Container Registry. In file /etc/ecs/ecs.config, we specify NO_PROXY filtering of the EC2 Metadata Service (169.254.169.254) and the ECS Agent (169.254.178.2). In file /etc/awslogs/proxy.conf we define Proxy URL for use by the CloudWatch Logs agent.*

Docker is stopped so removing the /var/lib/docker/network file forces Docker to recreate it when it starts.

The link to docker0 is deleted so that Vert.x binds to eth0 network interface rather than docker0.

|| true makes it so the command always returns a zero exit code no matter what.

09 - Architecting and Preparing Applications for ECS

“The Healthcheck will curl the port defined by the HTTP_PORT environment variable (or default port 35000) looking for a zero exit code (healthy) every 3 seconds and up to 20 reties. In Dockerfile.quote file:

It’s irritating, but many courses, even at the same vendor (such as Pluralsight) cover the same beginner information:

The course doesn’t cover use of Fargate and EKS. That’s covered by: