Visual, architectural, and culinary art in every state and major city, mapped by Machine Learning

This page lists where one can visit, see, and eat at the most important cultural artifacts in America. I created this page as “bucket list” so that even if I can’t visit each one and perhaps enjoy on-site, I can still visit their web pages. Someday soon everyone can see treasures from anywhere using VR (Virtual Reality) glasses providing 360-degree views in High Definition.

Do you have a roadtrip map or story? Please send it to me for posting here.

It’s a large country, so cites are listed by each state of the union, along natural geography East-to-West:

Journeys on water as she flows toward the Equator:

Journeys Northward on Cattle Drives in the 1880s.

BTW, finding where each site is located resulted in a great geography and historical lesson for me.

This Google route map was actually used by recent finishers to go around the 48 states in 6 days: 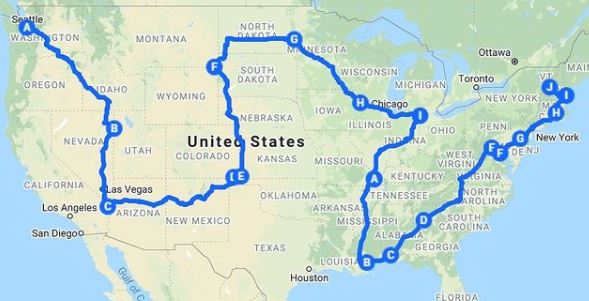 To deter reckless driving among Extreme Road-trippers, the Guinness World Records discontinued listing speed records in 1996. But that didn’t stop the All Fifty States Club website.

Notice the separation of green down the middle of the country?

VIDEO: 80% of Americans live East of the 98th Meridian, as shown by a green straight line overlaid this map from NASA’s BlackMarble satellite images of the nigh sky worldwide: 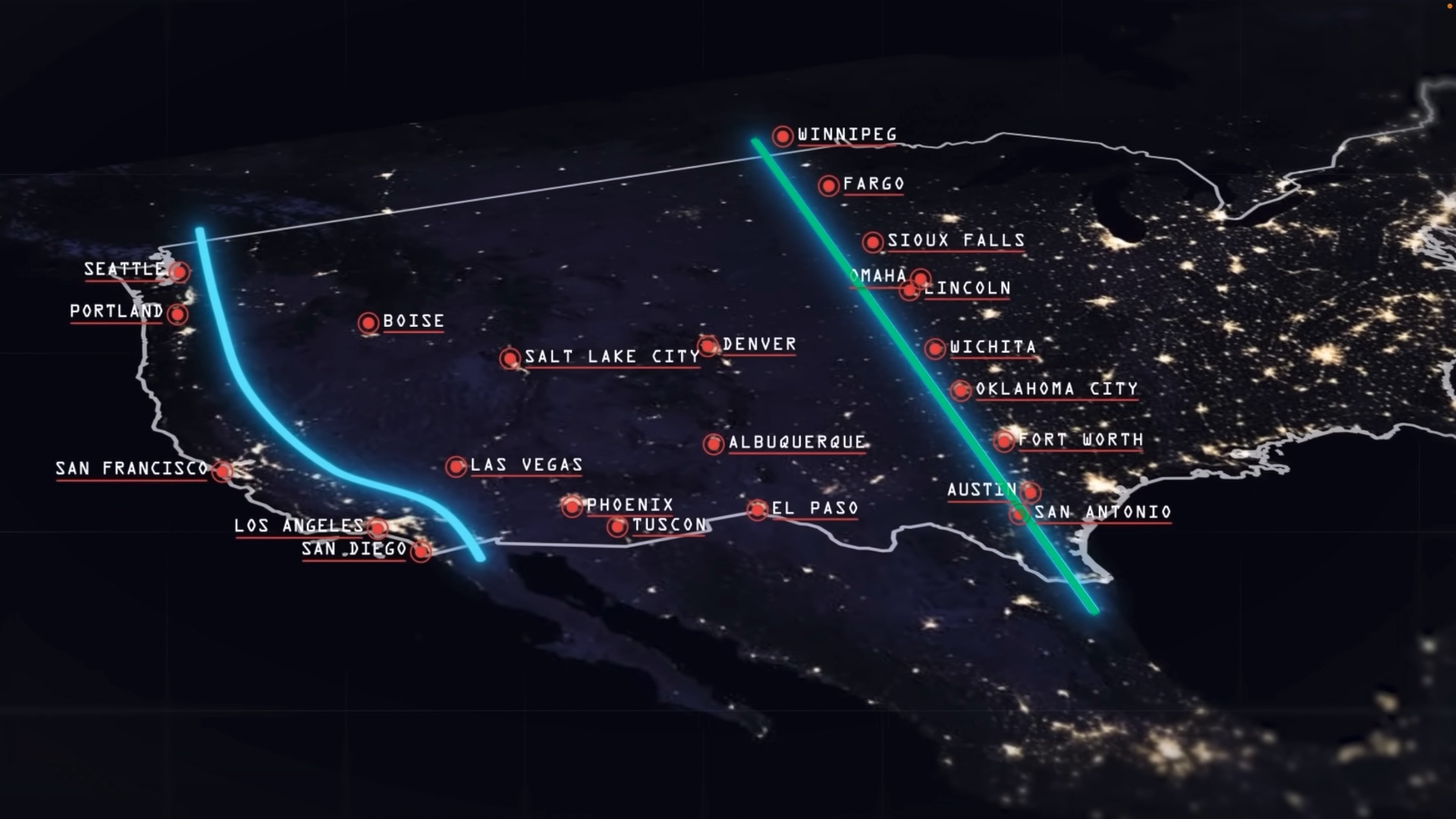 That green line down the middle of America defines the extent wet storms reach from the East. That line also defines the “Rain Shadow” where the tall Rocky Mountains (West of Denver, Colorado) which blocks moisture from the Pacific West.

When geologist John Westly Powell identified this phenomenon across the “pairies” in 1890, that natural line was at the 100th Meridian (vs. 98th today). Since then, “Climate change” continues to shift to the East. So expect less rain from Winnapeg (Canada) to Forth Worth, Ausin, and San Antonio Texas. Also impact will be agriculture around Winnipeg (Manitoba, Canada), Fargo, Sioux Falls, Omaha, Lincoln, Wichita, Oklahoma City. 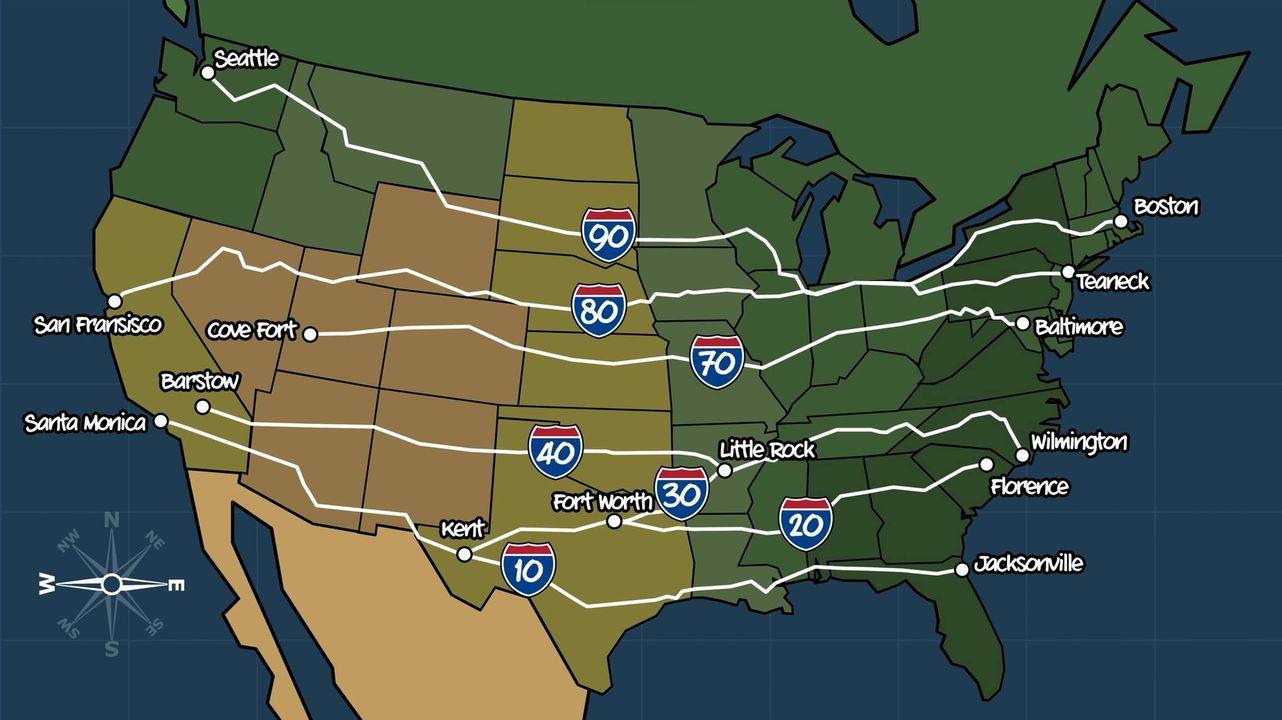 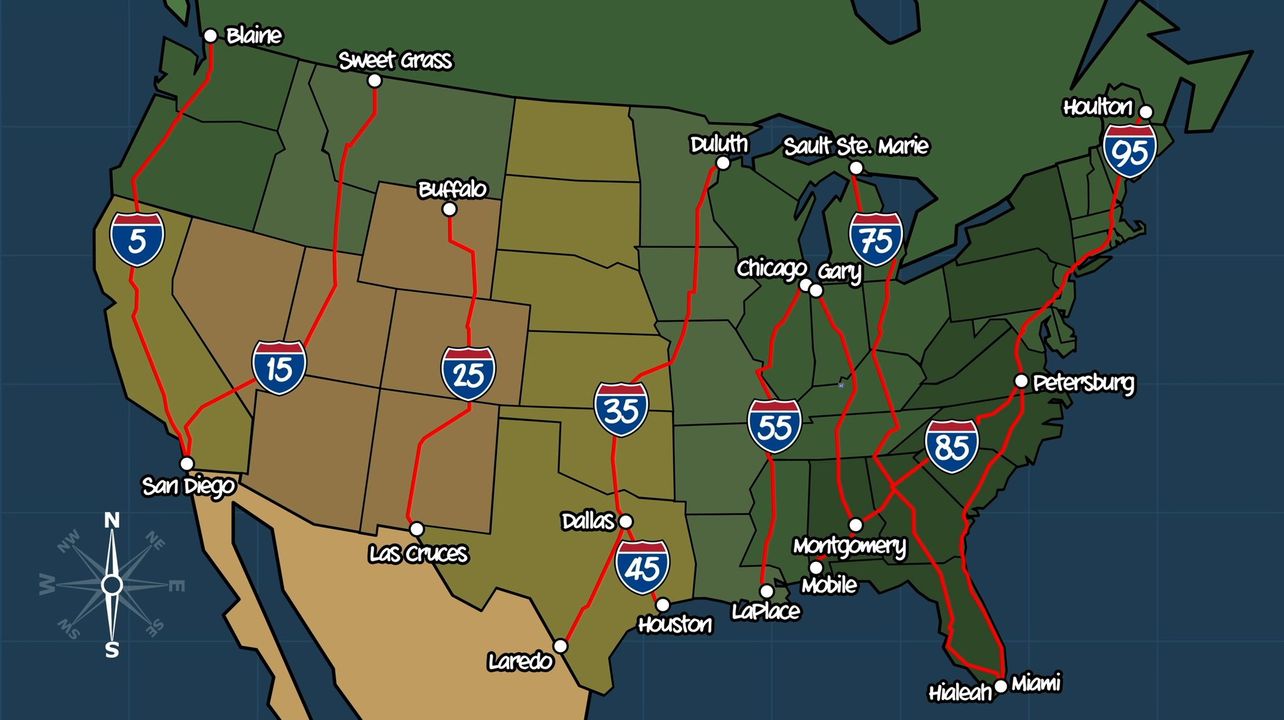 A map of stations offering Ethanol-free premium gasoline (at higher prices) is at pure-gas.org/extensions/map.html. My wife used it to figure out where I should stop along a route from Florida to Montana. It was difficult because we had to figure out where I was on the website’s map. She also had to calculate how much further I could go with remaining gas. Somehow we managed to stay married after that. 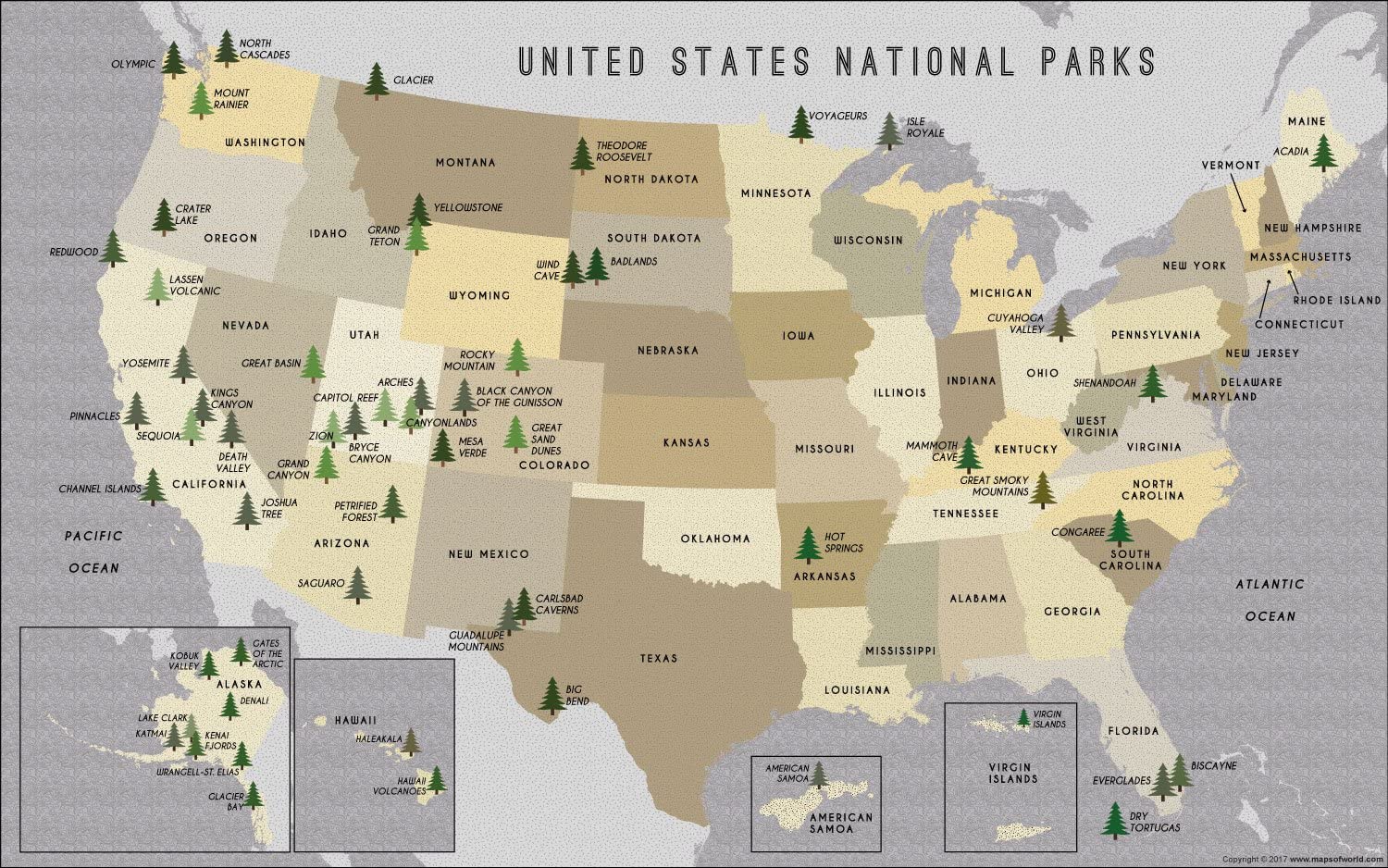 One couple visited the most significant parks in this order: 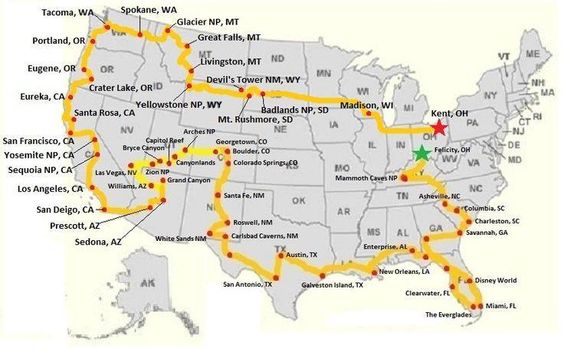 The above route through major landmarks in the lower 48 states was optimized for least driving time across 6,813 miles, using Google Maps API driven by Machine Learning algorithms run in a Python Jupyter Notebook as described by Randal S. Olson.

Many “Western” movies were filmed in iconic “Mighty 5” parks below Salt Lake City in Utah: Las Vegas from the South and Denver from the North 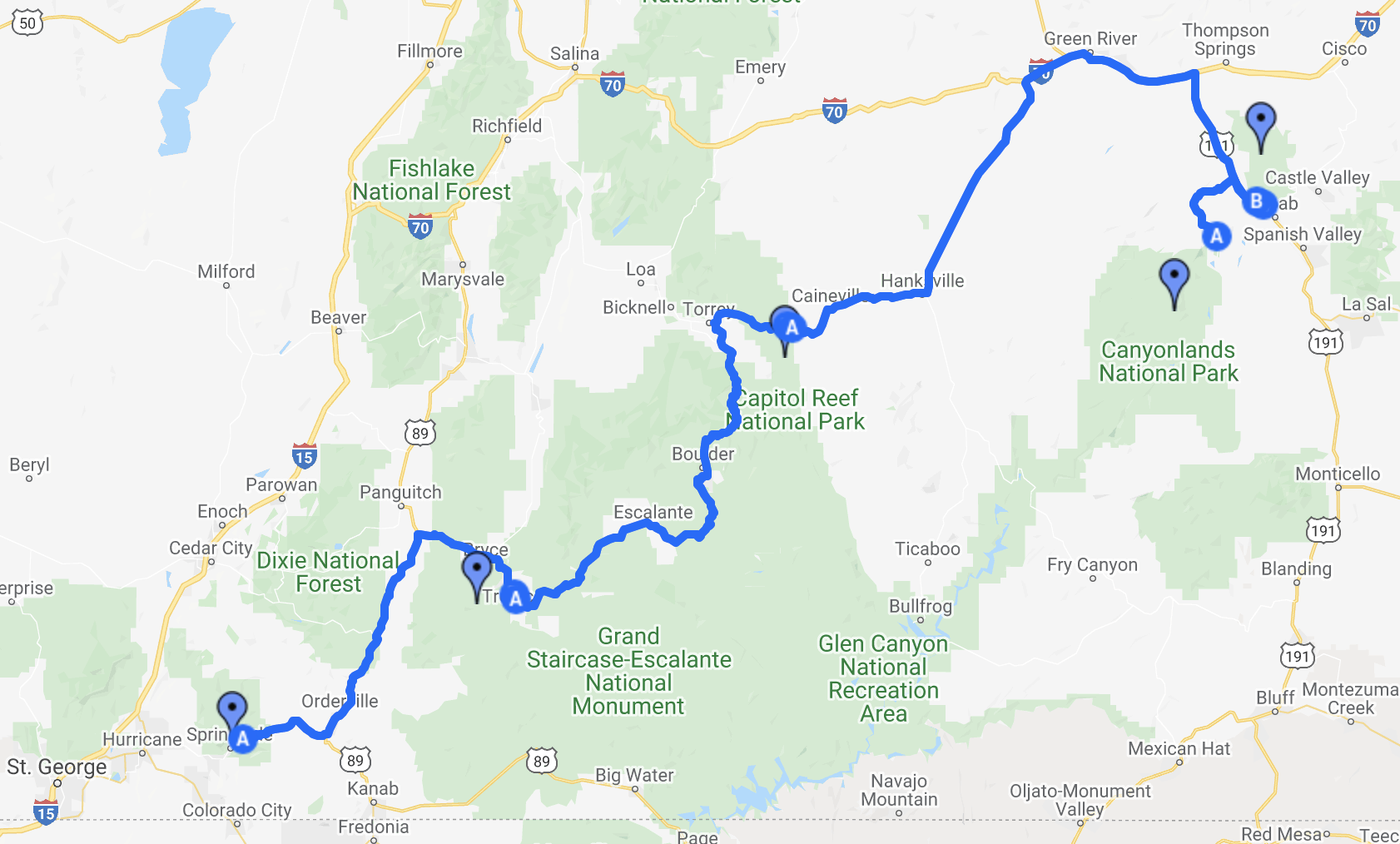 322 miles in 5 hours without stopping (click for Google Map):

States in white (Oklahoma) did not fight for either side. Idaho volunteers did not fight against the Confederacy. Areas in Arizona and New Mexico were claimed by both sides.

Down the Atlantic Eastern Seaboard

This is where the United States of America began as colonies of England.

The planned route of the courageous Freedom Ride May 1961 through the “Jim Crow” South to test a Supreme Court ruling against “whites-only” restrooms and lunch counters at bus stations: 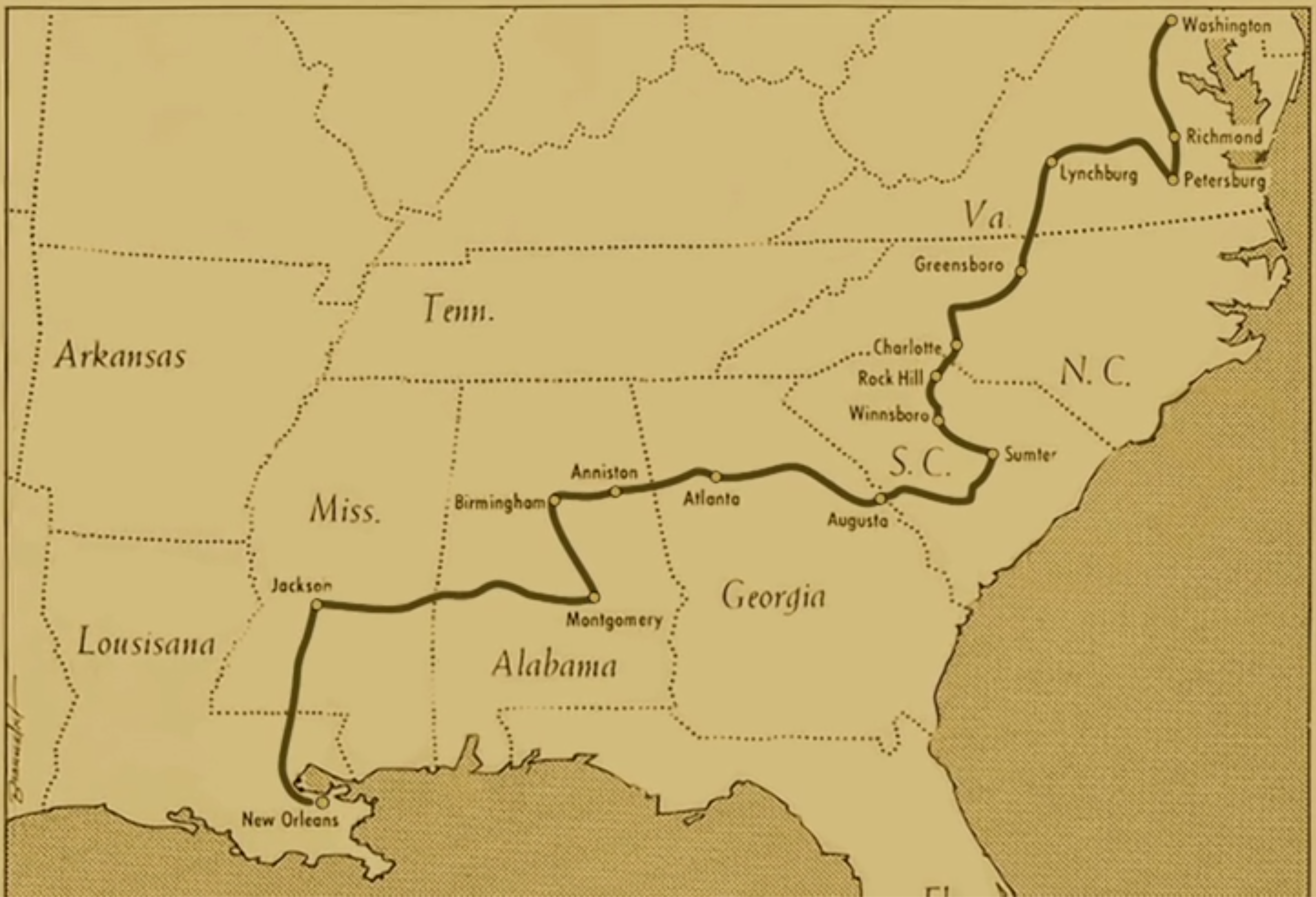 The Woolworth lunch counter in downtown Greensboro, NC is now a museum.

The ride stopped on May 14 in Anniston, Alabama where the bus was burnt by segregationists.

SouthEast of Boston on 3 to the tip:

DUMBO = Down Under the Manhattan Bridge Overpass is home to 25% of New York based tech firms, including Etsy. [tour]

St. Petersberg Northwest on 75 up the Gulf coast

South down the East coast

Down the Mississippi River

At 2,300 miles, the Mississippi River is the 4th longest in the world (after Nile, Amazon, Yangtze). It’s part of the largest watershed in the world.

VIDEO: “It’s inevitable that the US emerged as a global superpower”: the Missisippi is the longest navigable river in the world, enabling inland cities to be oceanic ports serving world markets by boat (10-39X cheaper than by road). 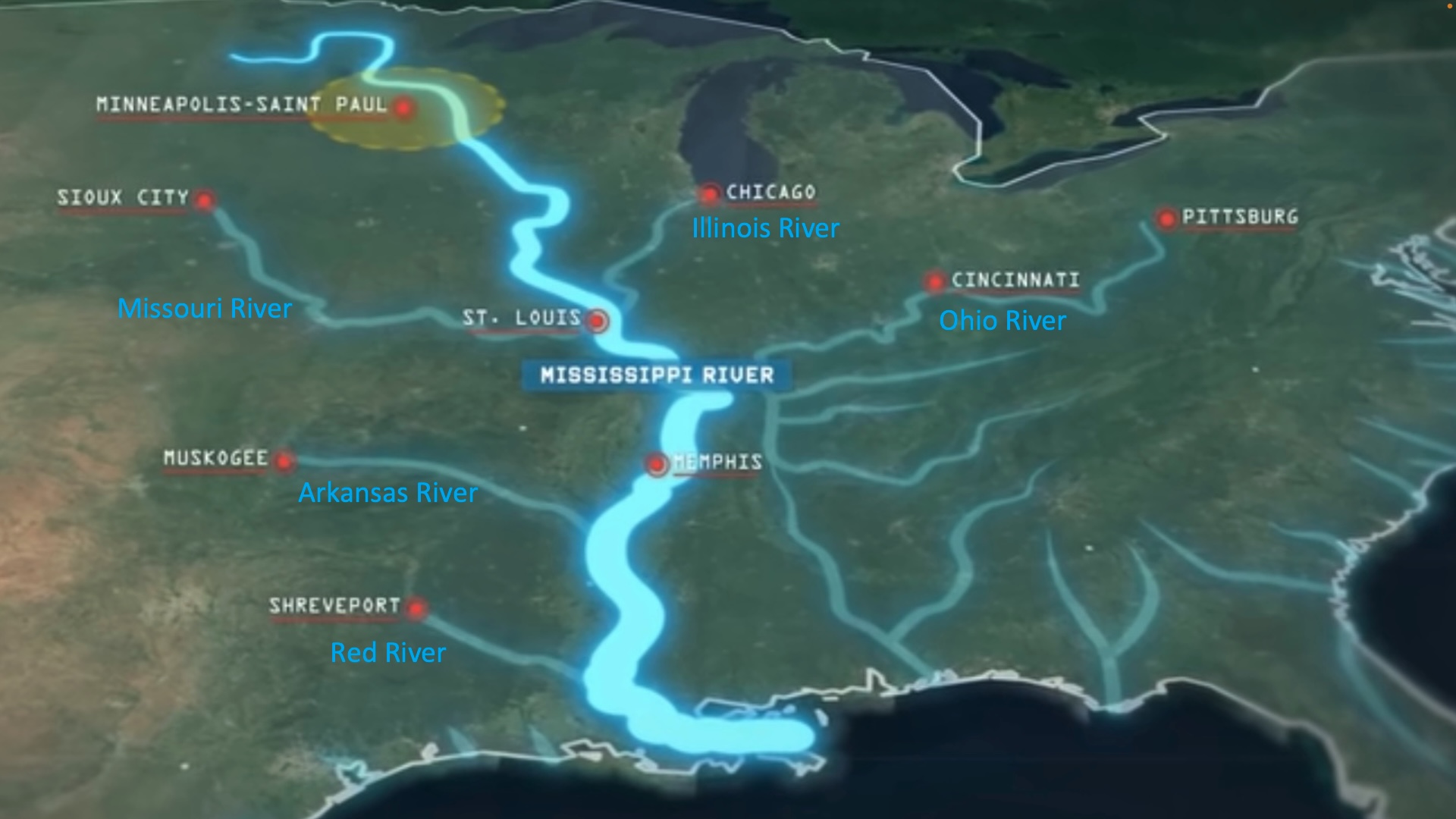 It takes 8 days for the “America Heartland” cruise between St. Louis and to St. Paul (waterfalls at the head of the Mississipi): 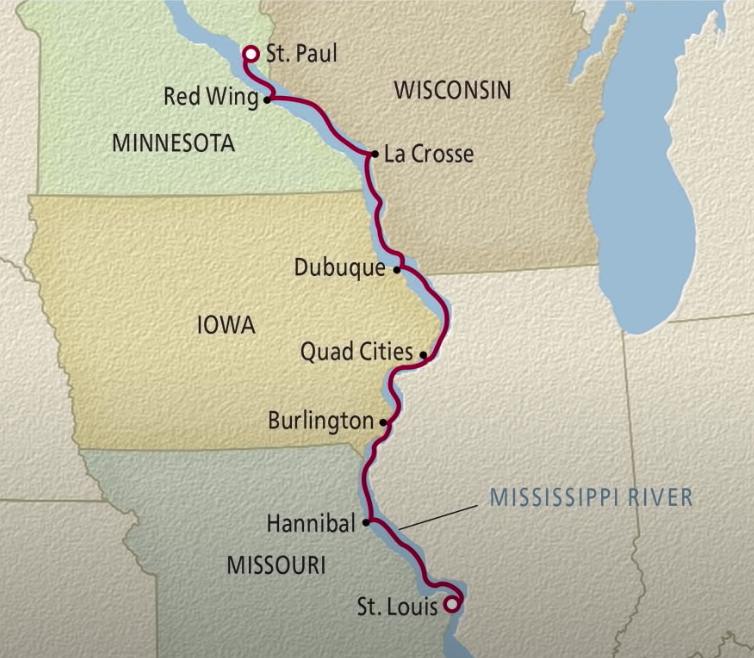 Cruise on a riverboat between New Orleans and Memphis, with stops in the Vicksburg battlegrounds. on Viking or the “American Countess”.

Cruise from Chicago to St. Louis down the Illinois River.

The TV series “1883” is about one of the cattle drives that brought Texas back from economic collapse after the end of the Civil War in 1865. The drive went from Fort Worth North toward Montana and Portland. Although a fictional story, the script mentions real locations: Doan’s Store Red River Crossing, established 1878 along the Western Trail to Dodge City, Kansas where trains carried cattle East. 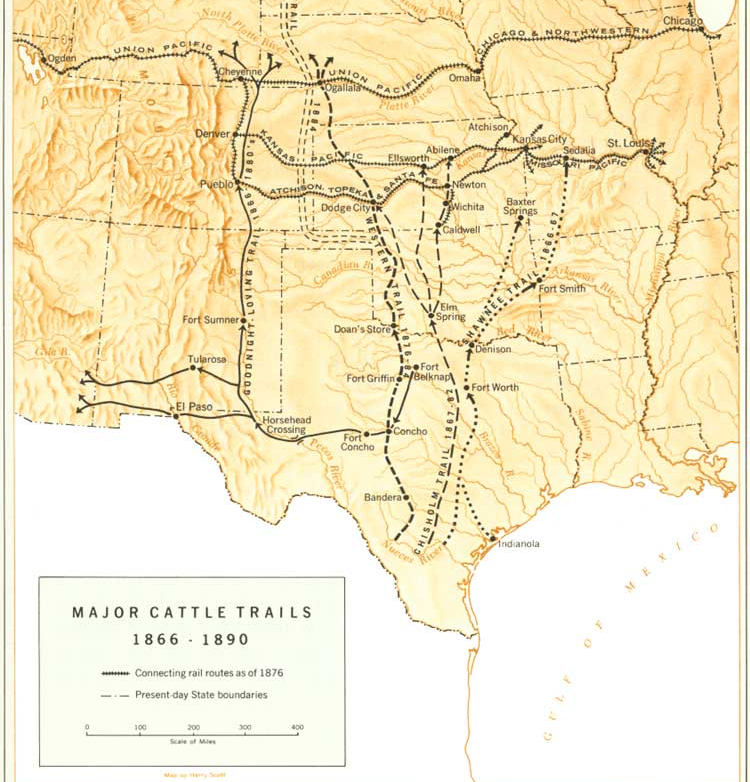 In 1881 the Doan’s Cross reached a peak of 301,000 cattle driven by to Kansas shipping points. This was before the “Chisolm Trail”.

In 1884 an annual picnic, celebrating the cattle drives and cowboy tradition, began near Doan’s Store.

In 1885 long cattle drives was eliminated by both the construction of railroads across north Texas and the fencing of the West using newly invented barbed wire.

The TV series “Lonesome Dove”, is set in late 1870s. Just like the “1883” TV series, it is also about cowboys seeking to drive cattle North to settle along Montana’s Yellowstone River. Several other movies have characters doing the same.

“Go West, young Man, and grow up with the country!” is the advice widely (but wrongly) attributed to New York Tribune Publisher Horace Greeley, who visited the West only once.

80 Pony Express riders (who include Calamity Jane) traveled day and night to deliver mail from St. Joseph, Missouri on the Missouri River to San Francisco, California in only 10 days rather than the previous 24 days. They carried news of the volatile time leading up to the Civil War.

But their service lasted for less than 2 years – from April 3, 1860 to October 24, 1861 – due to the availability of the electric telegraph along railroads.

Westward from Vermont to Kentucky

Down the Pacific West Coast

Just so we include all the states:

Amtrak’s California Zephyr (named after the Greek god of the Western wind). VIDEO: from Chicago to Emeryville (San Franciso) – 2 nights through 7 states: Naperville, Galesburg, Omaha, Denver (a one hour stop) over the mountains to Grand Junction, Reno, Truckee, Salt Lake City. With no wi-fi between stations.

The Lewis and Clark Expedition of 1804 to 1806 is an 8,000-mile trip to the Pacific (Portland, Oregon) returned with maps and scientific specimens for President Thomas Jefferson.

Oregon Trail to the Pacific

The Oregon Trail was established during the 1830s by mountain men in their fur trade, before motorized transportation. It favors valleys to minimize going over mountains: 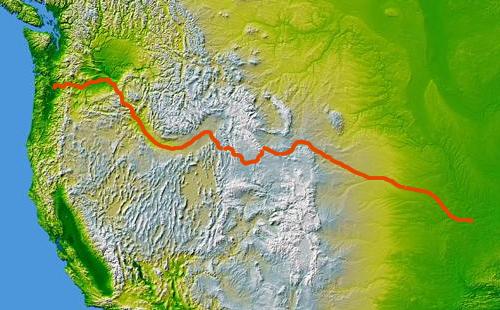 The trail begins from St. Louis and Independence, Missouri through Kansas and Nebraska to Fort Laramie, Wyoming (1834-1890). It then goes through Boise, Idaho to Portland, Oregon. A map of the trail in 1907:

Westward through the Southwest

VIDEO: Route 66 was one of the original highways within the U.S. starting in 1924. Thus its colloqual name the “Mother Road”. It served as a military transport corridor during WWII. In post-war years, motels, diners, and gas stations along Route 66 became popular vacaction destinations.

Route 66 begins on Michigan Avene in Chicago, where you can eat at Lou Mitchell’s diner. The route goes to St. Louis, Missouri, then through smaller road-side towns on the way to Tulsa and Oklahoma City, Amarillo TX, Alberquque New Mexico, then over mountains to Flagstaff AZ before ending on the Santa Monica pier in Los Angeles, California.

However, interstate freeways built from 1956 enabled travel without the need to slow down through towns. That bypassed small businesses along Route 66.

The Chisolm Trail was used between 1867-1884 to drive cows to market from various cowtowns in Texas through Oklahoma Indian Territory to Abilene and other railheads in Kansas. The Lonesome Dove TV series depicts that time.

Since Illinos and Missouri are already listed in our Mississippi route, here we begin from Oklahoma and take a long detour North to avoid too much desert along the way.

This rather large list was originally created to be intentionally large in order to test how well the system handles a large file (how quickly it can download and display).

This is an upgrade of my terrible Roadtrips to visit museums across the USA from 2005.

Next, I’d like to display a Google map of coordinates from a public Google spreadsheet like Jessica Lord’s hack-spots site implemented from a github repo which uses the sheetsee.js and Mapbox libraries.

“I haven’t been everywhere, but it’s on my list.” – Susan Sontag