Protractor was written by the team within Google who created the Angular testing framework in order to automate its testing. Unlike traditional static HTML, client browsers running Angular apps dynamically generates HTML and JavaScript on the fly. Protractor adds “accessors” to Angular models, bindings, ng-options, and finding elements inside ng-repeat. Since static or generated on the client, HTML is stored in a DOM (Document Object Model) web browsers maintain for each session. And Protractor grabs specific HTML elements from within each DOM.

The first version of Protractor was released in July, 2013. Google continues to support the work.

Even if a website is not using Angular, many still prefer coding Protractor rather than Selenium alone. One of the major advantages pointed out on https://protractor.angular.io (formerly protractortest.org) is that Protractor runs tests quicker than Selenium because it optimizes the need for manually adding (usually arbitrary) “sleep” and “wait” commands in test scripts. JavaScript is asynchronous (not sychronous like Java). Protractor can advance to the next step in the script even if a promise is pending. 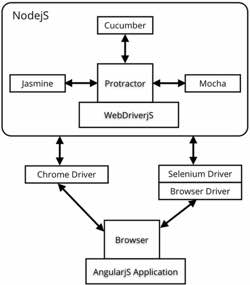 Daniel Amorim, in his 17 Apr 2014 “Testing AngularJS apps with Protractor”, showed this diagram:

Protractor is a NodeJs application written in JavaScript or TypeScript (invented by Microsoft). It makes calls to a WebDriver which controls a web browser such as Microsoft’s Edge, Apple’s Safari, Google’s Chrome, Mozilla’s Firefox, etc.

Other components are described as we install each:

1, Exit your command instance and enter it again so installations take.

If you prefer using an IDE, see my tutorial on text editors:

Then add code completions and other helpers.

To install plugins for autocomplete in Eclipse*

To install plugins for autocomplete in Microsoft Visual Studio Code*

To run Jasmine tests through WebStorm, follow WebStorm’s simple 13-step process to get it running. But note Jasmine isn’t a “first class citizen”. Jasmine can run only through the karma test driver. Follow more steps to be able to use WebStorm’s debugger.

These are steps every time you run:

Protractor is controlled by a config.js file such as this simple example:

The above specifies the use of the Jasmine JavaScript framework to run specs (short for specifications, or test case files). Jasmine (https://jasmine.github.io from Pivotal Labs) allows you to write both unit and functional tests. Alternately, there is a “cucumber” framework or Mocha

NOTE: The seleniumAddress URL shown here does not display on a browser because it is an “end point” that listens for API requests. But it does have a UI to display its sessions.

The seleniumAddress URL is to one of the options made available by Protractor:*:

PROTIP: In the file name specify where the run occurs and what browser. For example: “local.chrome.conf.js” for chrome run locally. Or “sauce.firefox.conf.js” for running Firefox on the remote “SauceLabs cloud.

Examples of other configuration js files include:

View a sample spec.js file that was specified in a config.js file, which gets (opens) a URL to expect the title to be as stated in “.toContain” method:

The above is the angular.io marketing page .(formerly AngularJs.org).

// (double forward slashes) in front of a line comments it out from being read.

it specifies a spec (specification) or test case.

The two are referenced in run reports

browser.get specifies the URL handled by the browser.

.then forces conditional execution of the console.log() so that it’s not random due to JavaScript exeuction being asynchronous.

PROTIP: We recommend an incremental approach. First, run for just the URL appearing. Then add more test steps. Once you obtain a successful test, commit the changes to the team repo (off your laptop). This would make it easier to debug.

So first let’s run the file as-is without changes.

Run from inside Eclipse

Alternately, if on Eclipse configured with the Protractor plugin:

Jasmine does not have a command line utility to run tests like Mocha:

“tests” are where tests are located.

The recursive flag finds all files in subdirectories.

The watch flag reruns tests automatically when a change is detected in source or test files.

Mocha’s approach enable tests to be initited by a right-click on the spec folder within WebStorm.*

Jasmine users can use Karma, also written by the Angular team, at http://karma-runner.github.io.

This article reports the various ways to run various test runners. While mocha-parallel-tests are fast. But even though Jest (the testing platform developed by Facebook) and AVA are slower, their additional features may be worth the cost. Those features include snapshot testing and test coverage.

During test runs, browser windows are opened and closed by Protractor.

The istanbul coverage reporter instruments ES5 and ES2015+ JavaScript code with line counters, to enable tracking of how well unit-tests exercise the codebase.

Use Chrome Developer Tools to see HTML id and names.

You need a sample app to test against, and sample scripts that test that site.

The provided repository contains an automated test for email sending functionality via Gmail as outlined below:

Your task is to implement below test case:

The tests above are called “e2e” or end-to-end from login.

Every protractor locator is formatted as (by.*), where * is the locator you have chosen to locate the element. Here is a list of the most common locators:

Protractor enables “find” by a combination of CSS and text (get me all the divs with class ‘pet’ and text ‘dog’).

Protractor adds the “addLocator” function to add custom locators. For example, get elements by handlebars properties.

The Mocha library (https://mochajs.org) appeared in 2011 with a different approach than Jasmine.

While Jasmine describes itself as having “batteries included,” meaning that it attempts to provide everything a developer needs in a test framework, Mocha instead aims to cover the basics and allow other developers to extend it with other frameworks, such as Chai and Sinon, which provides more sophisticated capabilities than Jasmine alone.

The syntax between Jasmine and Mocha/Chai are not that different. Where Jasmine is:

Mocha does not have a built in assertion library. So alternatives are Chai, should.js, expect.js, and better-assert.

Developers tend to choose the style with which they are most familiar.

Chai uses a “fluent” syntax where comparison operators can be chained together:

For example, if you want to write an expectation that verifies that calculator.add(1, 4) returns 5, see https://www.codementor.io/codementorteam/javascript-testing-framework-comparison-jasmine-vs-mocha-8s9k27za3

A “test double” library is used to replace one object with another for testing purposes, like actors being replaced with stunt doubles for dangerous action scenes during moviemaking. Or like a clone of an object.

In Jasmine, test doubles come in the form of “spies”. Each spy function replaces a function whose behavior you want to manipulate in a test while recording the results.

Mocha does not come with a “test double” library. So Sinon is added.

One feature that Sinon has that Jasmine does not is a fake server.

Fakes are used to simulate external behaviors without actually making any external calls. It’s needed because unit tests should not make calls outside their scope to networks or databases. So test “fakes” are used to isolate a test from external dependencies.

In summary, SinonJS is a more complete framework test double framework than Jasmine, including not only spies but also stubs and fakes.