What can possibly go wrong with robots smarter than humans?

Here are my notes about technical aspects of how cars can drive themselves.

Part of the facination (and fear) about Artificial Intelligence (AI) is computers becoming better and faster than humans in many arenas.

Driving takes concentration and is tiring. Because human drivers can be inexperienced, drunk, too tired, too distracted, etc., at the current rate of progress on AVs (Autonomous Vehicles), eventually the cost of “human error” (1 accident every 100,000 miles) will be higher than misjudgements by computers controlling vehicles.

Then, governments, auto makers, insurance companies, and others will make it more difficult to own human-driven cars.

Also, as cars automate more, and human drivers have less to do, inattention becomes even more of an issue.

Over time, as AI take over the road, self-driving cars can travel faster than what people can safely handle (around 70 mph). This would create a market for mini-hotels such as Volvo’s 360c concept car unveiled in 2018* Without constant attention to driving, personal vehicles can be RVs with a desk, bed, toilet, frige, etc. Commute without stress. Travel between cities without going through security.

The race to AV

Every auto manufacturer has a self-driving car program. Among the 40 companies:

Honda’s 2017 models and onward are built with self-driving features.

(from the Society of Automotive Engineers):

The high cost of computing power on purpose-built AVs forces amortization across many rides in taxis.

Uber has, since 2012, been offering free rides in driverless cars aroud Pittsberg and Chandler, AZ.

Cruise has been offering rides in San Francisco, California.

Uber and Lyft has dessicimated the jobs of human drivers. COVID-19 is making it even more dangerous to be a driver.

NOTE: On Teslas even the glovebox lock is controlled by the computer.

Zoox got the first California permit to transport passengers in self-driving cars, in 2018. Waymo in 2019. Uber in 2020.

Apple has not openly discussed their self-driving car program.

A disclosure in 2018 states that 5,000 employees at Apple know about a self-driving car program in the company.

Baidu is the Google of China, providing a search engine.

Apollo Valet Parking is due to launch in 2020.

Comma’s “OpenDriver” software is open sourced, so it’s difficult to regulate by governments.

VIDEO: The camera facing the driver detects whether the driver is paying attention to the road. There are also infrared LEDs on Comma’s windshield case to provide night-time driver monitoring.

Elon Musk became the wealthiest person in the world with 25% ownership in Tesla.

VIDEO: “Lidar is a fool’s errand”.

Udacity is founded by Sabastian Thrun (from Sweden), the “father” of self-driving car. When he was a professor at Stanford, his team won the first DARPA Grand Challenge car race. He then joined Google.

Computers needs to be able to control the vehicle’s steering, throttle, and breaking systems to execute its planning. 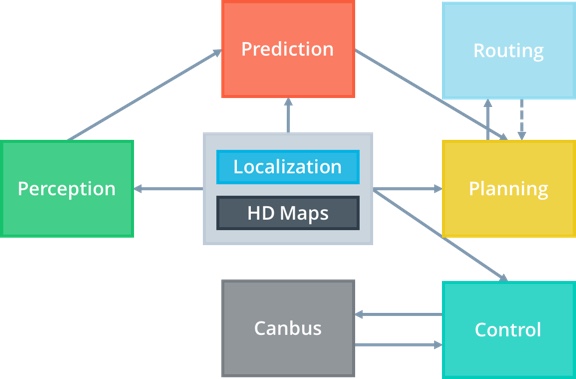 The eventual design for version 3.0 of Baidu’s design adds a “Guardian” component: 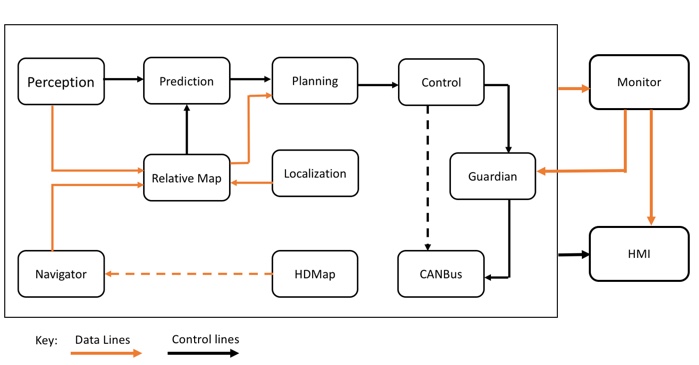 The “Canbus” is a Controller Area Network (CAN) which transfers data between devices without the assistance of a host computer. Attach a temperature sensor to the surface of the main IC chip on ESD CAN (an Altera FPGA chip) to monitor the surface temperature of the chip to make sure it is not overheating.

An off-line demo without the expensive hardware can install and run on laptops. It’s kinda like the Grand Theft Auto game. It uses Baidu’s Python-based Apollo Dreamview visualization software running under Linux: Ubuntu 14.04. Apollo is based on Linux Kernel 4.4.32).

It needs a three-dimensional model (point cloud) of the road network, including the road, buildings, tunnels, etc. with road names and the speed limit for each stretch of road, traffic lights, and other traffic control information.

Apollo uses the OpenDRIVE map standard used by its competitors. Baidu has 300 survey vehicles to map all the highways in China.

[4:50] A particle filter, a sophisticated type of triangulation which calculates how far the vehicle is from various landmarks (street lights, traffic signs, manhole covers).

For a vehicle to “localize” itself to single-digit centimeter accuracy, it currently needs to use several technologies.

Self-driving cars need to figure out more precisely where it is in the world than what GPS (Global Positioning System) can provide. A GNSS (Global Navigation Satellite System) receiver needs at least 3 of 30 satellites to calulate its location (based on time of flight). Also, GPS updates every 10 seconds, which is too slow.

The Inertial Measurement Unit (IMU) consists of a 3-axis gyroscope and accelerometer. It updates at 1000 Hz (near real time). The system has to reconcile two XY coordinate frames: the vehicle and the map. In the 3D Gyroscope, the spin axis is set to the global coordinate system while the 3 gimbals rotate.

LiDARs today use 32 lasers and 1 or 2 million beams per second, and that a 64-laser system emitting 6.4 million beams a second would give superior vertical resolution and quicker refreshes. This would be better able to capture small, fast objects such as animals darting into the road.

Alex Lidow, CEO and cofounder of Efficient Power Conversion, a provider of the gallium nitride chips found in many modern lidars. https://backchannel.com/how-my-public-records-request-triggered-waymos-self-driving-car-lawsuit-1699ff35ac28#.vi4talr7i by @meharris

Deep (learning) Neural Networks are used to draw bounding boxes to identify which lane the car is using.