Get bits working in lightweight containers

The object of this tutorial is a succinct yet deep step-by-step instructions to setup of Docker on MacOS, CentOS Linux, and Windows.

VMs on MacOS vs. Docker

This is a more complex diagram than others so that interrelationships can be illustrated. TODO: Video to gradually reveal this.

Click this for a pop-up containing a larger sized image.

Prior to Docker, a developer working on a Mac Pro can, in addition to native apps for Mac, also run Microsoft Visual Studio for Windows in a full install of Windows 10 by running them within a VMware Fusion or Vagrant hypervisor that manages Virtual Memory instances. See https://www.upguard.com/articles/docker-vs-vagrant

Each additional VM (virtual machine) instance would take several more Gigabytes of disk space and memory because operating system files are duplicated inside each VM instance.

The Docker for Mac installer is downloaded from Docker’s website. It makes use of hypervisor software that doesn’t need Oracle’s Virtualbox previously needed.

Docker for Mac makes use of a Hyperkit hypervisor which runs Docker images such as NGINX.

Docker images are obtained from Docker Hub on-line or a more private and trusted image repository. Many images are visible searches within Docker Hub.

That same container image can run on another platform unchanged, typically a GNU/Linux kernel such as Debian running on a commodity server within AWS EC2 cloud. Docker is designed with cloud computing providers in mind.

The Docker Engine takes care of loading images and running them. It is installed from the package manager over the internet.

Docker is lighter weight because it provides the read-only portion of a Linux operating system to be shared among several images. Each image has its own bin and lib folders.

Docker is also lightweight and thus more scalable because each image intends to run and watch one single process. SSH ports are not opened into images.

A data volume outside the image is referenced to read private keys.

Additional data volumes (such as InfluxDB) are shared for logging with an additional image. It receives stats collected by the cAdvisor image (from Google) and structures data for display in a Grafana dashboard.

Images that go into container repositories are created by a build command in Docker for Mac and Windows. The build is based on source code for an app in GitHub having a Dockerfile and .dockerignore file.

Docker for Mac was released in 2016 as a native app that keeps itself updated, so no Homebrew for it as with previous versions. This new version makes use of 64-bit processor in a 2010 or newer Mac, which has Intel’s hardware support for virtualization. The operating system is MacOS Yosemite version 10.10 or newer, such as El Capitan 10.11 or Sierra 10.12.

Docker for Mac uses underlying software not in prior versions, so NO obsoleted docker-machine commands that load and manage images depend on the installation of Virtualbox by the deprecated Docker Toolbox.

Click this for a pop-up containing a larger sized image.

“By using containers, resources can be isolated, services restricted, and processes provisioned to have a private view of the operating system with their own process ID space, file system structure, and network interfaces. Multiple containers can share the same kernel, but each container can be constrained to only use a defined amount of resources such as CPU, memory and I/O.” – Wikipedia

Each container runs as an isolated process on a shared kernel. The isolation mechanisms that keeps resources (CPU, memory, filesystem, network, etc.) of each process isolated from others is a Linux kernel feature CGroups (abbreviated from “Control Groups”) developed within Google.

During PyCon on Friday, March 15, 2013. Solomon Hykes, the founder of Docker, gave a lightning talk on “The future of Linux Containers, delivered”.

PROTIP: Docker was initially developed to run under different flavors of GNU/Linux, not FreeBSD. 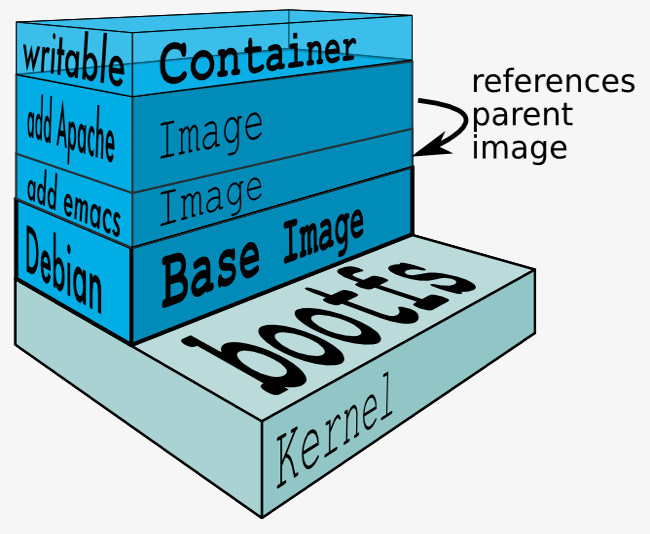 Different operating systems use different file-system software for union-mount. For example, Debian uses bootfs. Wikipedia notes aufs (Advanced multi-layered Unification File System) was rejected for merging into mainline Linux. Its code was criticized for being “dense, unreadable, and uncommented”. Instead, OverlayFS was merged into the Linux kernel.

The contribution of this article is a shell script that automates the install of Wordpress by following the manual steps described below:

The “boilerplate” sections at the top of the script is based on my bash coding tutorial.

The script has the following:

Some scripts, especially those to install unvetted packages, public key it associates with the cryptographic signature it generates for each file so that you can verify whether files have been tampered with or bits lost during transit. Use of GPG (GNU Privacy Guard) or PGP (Pretty Good Privacy) is stronger than MD5 hashes.

With Ansible, see this.

PROTIP: The version of Linux that comes with Mac isn’t completely compatible with Linux. So an extra layer is needed to emulate a Docker host. That’s Boot2Docker.

My recommendation is to install using Chocolately so you don’t have to click through the https://docs.docker.com/docker-for-windows official installer.

Native Windows images have been running within AWS EC2 clouds.

But since Docker images containing Windows OS can run on other machines (such as MacOS and Linux), their use would reduce testing and admin. effort.

The marketing page about run Windows within AWS EC2 is
https://docs.docker.com/machine/examples/aws/

CAUTION: A 64-bit Windows machine is necessary to run Docker. Not 32-bit.

Within Docker for Mac, the Docker engine runs in an Alpine Linux distribution on top of a Mac xhyve (pronounced “x-hive”) Virtual Machine.

Alpine comes with Docker for Mac, but for additional information, see:

BTW, The Alpine Linux distribution (distro) is so small that there is an edition of it for the Raspberry Pi.

There are two methods for installing Docker on CentOS 7:

The Docker installation package available in the official CentOS 7 repository may not be the latest version.

To get the latest and greatest version, install Docker from the official Docker repository.

These instructions apply to Docker running within all operating systems.

G2 in 2019 gave these crowd-sourced ratings: 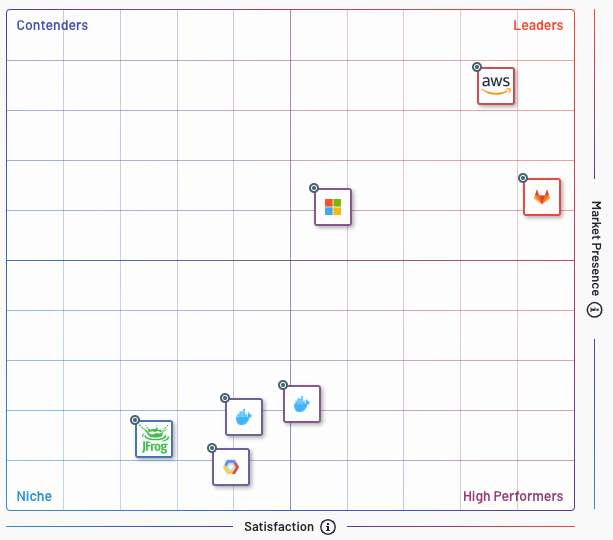 Not in their analysis are:

Installing Docker gives you not just the Docker service (daemon) but also the docker command line utility, or the Docker client.

Regardless of the OS, the installation provides:

The vm_max_map_count kernel setting needs to be set to at least 262144 for production use. Depending on your platform:

OSX with Docker for Mac

The vm_max_map_count setting must be set within the xhyve virtual machine:

Log in with root and no password. Then configure the sysctl setting as you would for Linux:

The vm_max_map_count setting must be set via docker-machine:

PROTIP: Similar to Python, most people run commands within a Docker machine (which is the whole point of installing Docker). 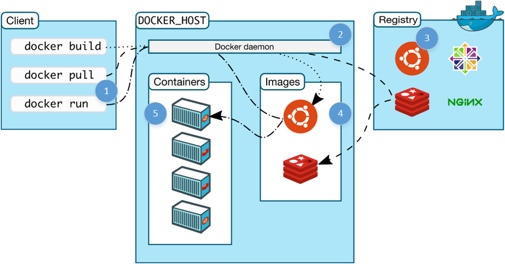 This section describes how to run a Docker image.

PROTIP: Consider a third-party tool to display visualizations of image data: dockviz presents Docker image and container information in graphic form to help you understand what’s going on inside the system.

ImageLayers.io is an Adobe Flash site that shows how each command in Dockerfile contributes to the final Docker image, and discover which layers are shared by multiple images. It presents an ImageLayers badge about the size of an image, and how many layers it is composed of.

Before pulling Microsoft’s images from https://hub.docker.com/u/microsoft/ note they are designed to be used from “Windows Insider program” Windows Server or Windows 10 Container hosts. They are of “beta” quality.

Run from my GitHub

To prevent attacks using default passwords, MySQL now requires its password to be changed when instantiated:

When an application starts, it’s a problem if its dependencies are not available:

Traditionally, the approach is to ensure the database is started before starting the applications that depend on it by using Puppet, Chef, Ansible, or other configuration management tool.

“This is nothing more then a band-aid covering up the larger problem.” Kelsey Hightower says and recommends having app code handle the dependency problem. His sample in Go:

TODO: Put startup-related code in a library for re-use.

Docker does have different security requirements which can seem to be a hindrance.

Security can be integrated but it does require knowledge of the Linux container environment.

PROTIP: On a Mac, the docker-machine VM is called “default”, existing in directory
/Users/<username>/.docker/machine/machines/default/

Docker Machine provisions Docker on virtual machines that reside on local or on a cloud provider.

TOOL: Kompose is a convenience tool to go from local Docker development to managing your application with Kubernetes. Transformation of the Docker Compose format to Kubernetes resources manifest may not be exact, but it helps tremendously when first deploying an application on Kubernetes. Install on Windows machines:

There are several alternatives to collects stats for monitoring dashboard:

Might want to change the port number when you run the command:

This describes setting up cAdvisor can write to InfluxDB time-series database for display by Grafana.