Here is (the beginnings of) a description of my attempts at automating the feeding of donkeys in the morning without going out into the barn before they bray annoyingly.

At first I thought of the design as like dropping balloons from the ceiling or red liquid at a Carrie” movie remake.

This video shows an Arduino controlling the door to chicken coop that, rather than using a simple timer to open and close the chicken coop doors, a computer considers sunrise and sunset times.

We’ve thought of several options. I’m looking for the lowest cost, least hassle, and most reliable. The less moving parts the better. Movements would occur on a timed schedule:

We can’t leave a lot of food laying around because they eat everything they can reach.

Thus, I need a way to hold their hay for release automatically at a set time.

The one with the least moving parts seems to be a netting bag used to slow down how quickly horses and other equine eat. 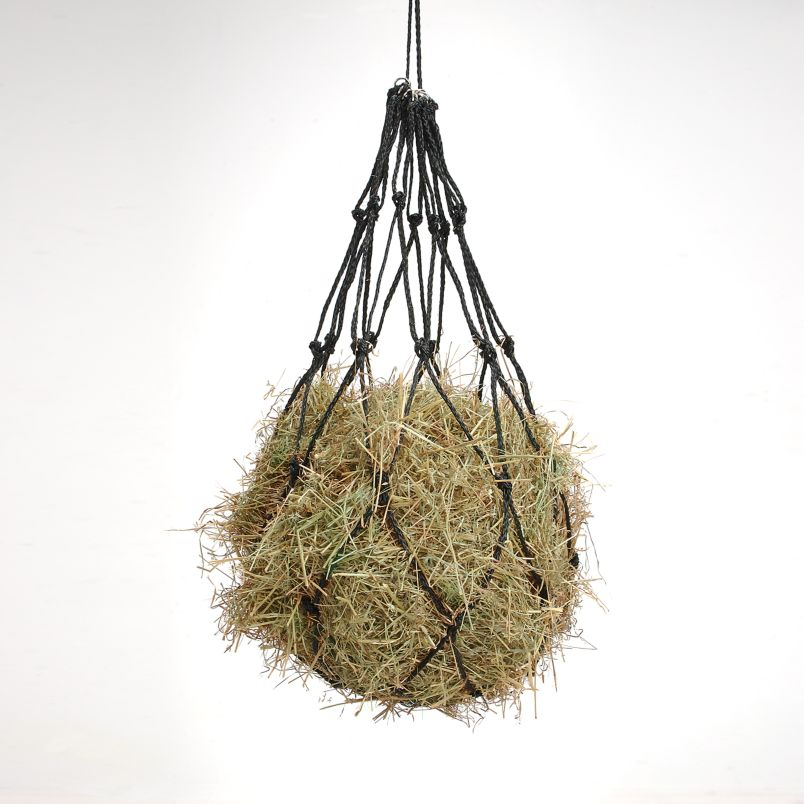 It is lowered and raised by an electric hoist. The 125 Watt motor shown below can lift up to 110 pounds 40ft with a single line. A double-line configuration can lift 220 lbs 20ft. But it can be kinda slow, at 16.4 ft./minute. 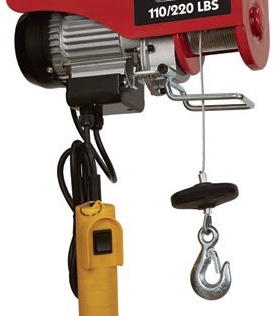 The project is to add to the manually controlled toggle switch on the yellow box with an actuator controlled by a Pi or Arduino that runs on a timer.

A later phase would add consideration of Sunrise/Sunset times for a specified Latitude.

The Pi case would need to have some dust filter and a fan powerful enough.

The platform with an open box (feed tray) would be lowered by something like a garage door opener.

The advantage of this approach is that food is not on the ground, which causes some waste and is less hygienic (if that matters).

The video in this blog describes tweeks to a garage door opener.

This post talks about a trap door held by a pin attached to a solenoid. A quick pulse releases it. A transistor or MOSFET to drive the release to protect the Arduino from excess current or spikes.

This project is similar to a hanging table held up by pulleys.

The parts listed below are used to construct a platform with a box to hold hay (material). The box is raised by four ropes (one on each corner). There is a panel on 3 sides to hold material in. For loading, the platform is lowered. Due to the weight, the box is raised and lowered by a garage door opener. There is a door on the front side that opens to let the material slide out. So material can slide out of the platform, the front box edge is tilted down and up by a separate stepper motor controlled by an Arduino or Pi computer that controls the angle depending on the time of day (minutes before/after sun up).

How it works (I think)

The Arduino website explains Servos have integrated gears and a shaft that can be precisely controlled. Standard servos allow the shaft to be positioned at various angles, usually between 0 and 180 degrees. Continuous rotation servos allow the rotation of the shaft to be set to various speeds. The Servo library supports up to 12 motors on most Arduino boards and 48 on the Arduino Mega. On boards other than the Mega, use of the library disables analogWrite() (PWM) functionality on pins 9 and 10, whether or not there is a Servo on those pins. On the Mega, up to 12 servos can be used without interfering with PWM functionality; use of 12 to 23 motors will disable PWM on pins 11 and 12.

This video explains: A stepper motor is used in applications requiring about 2000 rpm or less where you need a lot of torque at the low end, where as a servo motor is typically used for your higher speed applications that are more dynamic and require more acceleration and deceleration typically 2000 rpm and higher.

A servo is always built with a feedback mechanism.

Some salvage the motors from scrap copy machines

This is one of a series on IoT:

NOTE: Pages about GE’s Predix have been removed.