How to setup a Raspberry Pi on macOS with Raspbian, Python, Node, Ansible, Kubernetes

This tutorial provides manual instructions and automation scripts to setup and run apps.

Why: Use cases for the Pi

VIDEO: What to run on a Raspberry Pi?

For enterprises, the Raspberry Pi doesn’t come with the corporate buracracy. 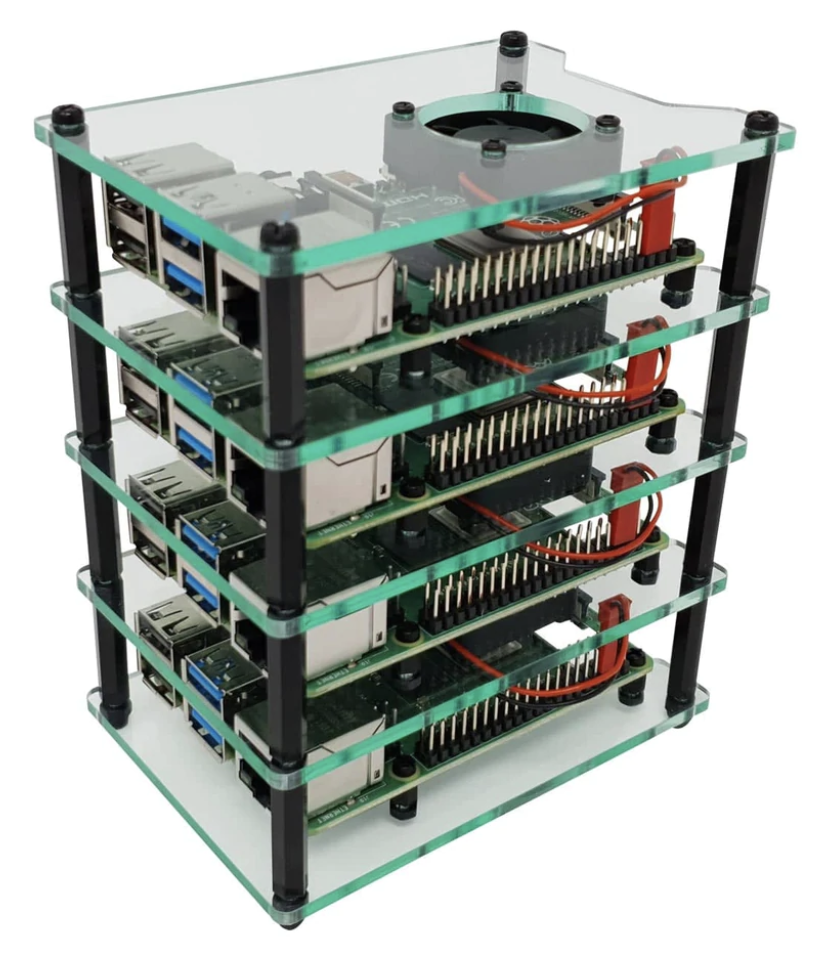 Run apps (within Docker containers) in Kubernetes on a cluster of (“bramble”) Rasperberry Pi computers in order to become proficient at configuring the correct mix of settings for ARM and to refine automation scripts for functional and capacity (load balancing and scaling) testing of containers. The cost of a each board in a “extreme” Pi cluster which orchestrates several Pi’s together is less than a perhaps a single day running a Kubernetes cluster in a “pay as you go” cloud environment. Without cost pressures, a stand-alone Pi can run overnight (or all week) without the hassle of needing to be brought down for cost reasons. Compare performance using Linpack Benchmark vs Turnpike2.

The Extreme Kit’s box comes with a fan, because heat reduces the life of a board.

Heat sinks glued on top of each chip helps to difuse heat.

Power over Internet cables and network switch or Power supply:

Newer Pi have mini HDMI ports, so be sure to have an adapter or a cable with a mini on one end and a full HDMI adapter on the other end.

The Pi is a Single Board Computer (SBC), a “small form factor” computer with a tiny footprint that put full-sized PC power in the palm of your hand:

Operating Systems for the Pi

The Raspberry Pi needs an operating system written for the ARMv8 CPU on the Pi 3, which replaces Pi 2 and its ARMv7 CPU. Based on this.

Several operating systems can be installed on a Raspberry Pi:

On the Raspberry Pi

This too much hassle? I can sell you a chip with everything described below.

You may need to buy a 32 or 64 GB SD chip along with an adapter if you need one (as for cameras).

2017+ Mac Book Pros do not have a slot to read SD cards, so need a USB-C converter rather than older types of USB ports.

WARNING: You need to plug the micro SD chip into a full-size SD chip adapter, which goes into the Mac’s SD card slot. You may also use an adapter for USB, which may need to be plugged into a USB port rather than on a USB hub (even a powered one).

CAUTION: Be sure the adapter can read the size of chip. Older ones for reading 4GB cannot read the 32GB or 64GB let alone 128GB chips.

Insert micro-SD chip in your laptop

Skip to DownloadImager unless you want to install Talos:

Steps in this section can be performed by a script.

To get full capacity from USB/SD drives (which format does not solve):

On the Raspberry Pi:

If you want to network boot multiple Raspberry Pis, you could use PiNet at:

It is a free and open-source community-based project initially designed for schools. Each Raspberry Pi boots off a small set of startup files on an SD card and fetches the rest of the data it needs from the PiNet server, thereby allowing you to maintain a single operating system image for all the Raspberry Pis. PiNet also adds network user accounts, shared folders and automated backups.

Connect via SSH on same router

A monitor, keyboard, and mouse do not need to be plugged into the Pi if you SSH into the device from your Mac or Windows PC.

Instructions here are based on this video.

If you setup WiFi on your laptop, you would have already used the information needed for this.

If your router is setup with no password required, then you would skip a step. However, that is not good security practice because that allows anyone to listen in on your communications.

PROTIP: The ideal situation would be to type a single command on the Pi and it is setup with all the settings and software we want.

Get and run config scripts

This section describes each step of the automation script.

See this on connecting to a wi-fi network.

Wi-Fi and Bluetooth are built into only the Pi 3 (not in the Pi 2).

In playbook.yml provide a correct SSID and password and it installs Amazon’s AWS IoT NodeJS SDK

Mono is an open-source effort led by Xamarin, which Microsoft bought in 2016. Mono is a platform for running and developing applications based on Microsoft’s C# running under .NET (as standarded by ECMA/ISO), a competitor to Java and JVM. Mono provides a complete CLR (Common Language Runtime) including compiler and runtime, which can produce and execute CIL (Common Intermediate Language) bytecode (aka assemblies), and a class library.

In a terminal window in Raspberry Pi:

PROTIP: Downloads for Mono from the website are for running on Windows and Mac desktop computers, not IoT devices.

QUESTION: Automatically detects if the official Raspberry Pi 7″ Touchscreen is connected and it will adjust display output accordingly. Like the ISS Above does.

The design of sending a tweet that appears on Twitter.com provides an example for how other web-based services are handled.

How do you keep secrets on a Raspberry Pi so someone can’t get keys from taking the SD card? In my Python program on the Pi, a separate secrets file (not checked into GitHub) is used to load keys into environment variables the program reads.

Have your Raspberry Pi tweet you when the CPU temperature gets too high? https://www.raspberrypi.org/learning/getting-started-with-the-twitter-api/

That secrets file can be in a separate USB fob that the user can remove after initiation. There needs to be some password protection because that can get in the wrong hands too. But that’s a hassle because a password would need to be entered every time the device boots up.

Send the reading to a cloud collector.

There are several alternatives.

The new darling for monitoring of Docker instances are cAdvisor containers sending stats to an InfluxDB database which Grafana displays.

Grafana doesn’t provide packages for ARM processors used by the Pi. But fg2it’s repo describes building of Grafana for ARM.

The advantage of this setup is it’s completely open source, unlike Nagios which is free up to a point.

https://github.com/fg2it/phantomjs-on-raspberry makes http://phantomjs.org/ available on Pi. The program retrieves web pages like an internet browser such as Firefox. But it does not display the pages. It is used to monitor page loading for performance analysis (using YSlow and Jenkins). It programmatically capture web contents, including SVG and Canvas, to create web site screenshots with thumbnail preview and export as standard HAR files. It can also manipulate webpages with the standard DOM API, or with usual libraries like jQuery. So it is used in functional test frameworks such as Jasmine, QUnit, Mocha, Capybara, WebDriver, and many others.

There are three major ways to install Node.

DaveJ pointed out that NodeSource (the people who make enterprise N|Solid) has prepared a Bash script for installing Node.js v7.x Debian and other distros.

Install Node.js from source you can examine:

Backup image to another SD card

Make a backup image (.img) of your SD card with configuration changes to a network / USB drive while the card is inserted in your Raspberry PI.

If you want to network boot multiple Raspberry Pis, you could use PiNet at:

It is a free and open-source community-based project initially designed for schools. Each Raspberry Pi boots off a small set of startup files on an SD card and fetches the rest of the data it needs from the PiNet server, thereby allowing you to maintain a single operating system image for all the Raspberry Pis. PiNet also adds network user accounts, shared folders and automated backups.

Google Tensorflow on a Pi

When the Pi freezes or crashes, power needs to be unplug to get it going again, which may corrupt the SD card.

A Dynamic DNS is a public DNS name such as http://pyramidhead.gotdns.com/ which points to the IP address of your home network IP. This example from “gotdns.com” is from Dyn.com for $40/year.

https://www.raspberrypi.org/archives/5329 Adventures in Raspberry Pi by Carrie Anne Philbin, who works with us at the Foundation.

To force the screen to stay on all the time rather than timing out:

Add the following lines to the [SeatDefaults] section:

https://chrome.google.com/webstore/detail/rotisserie-url-rotator/iljemanjjfjlglhkmojkmfbpphiaheja?hl=en Rotisserie URL Rotator by C.Haynes,Jr. Automatically rotate through URLs in one tab.

Setting Up Raspberry Pi as part of ACloudGuru video IoT on GCP by Karlos Knox.

This is one of a series on IoT:

NOTE: Pages about GE’s Predix have been removed.