It can do it for you … before it does you in

To give you an idea of the pervasiveness of AI and Machine Learning, Google CEO Sundar Pichai said in 2016:

“Machine learning is a core, transformative way by which we’re rethinking how we’re doing everything. We are thoughtfully applying it across all our products, be it search, ads, YouTube, or Play. And we’re in early days, but you will see us — in a systematic way — apply machine learning in all these areas.”

In 1997, when Deep Blue beat world chess champion Gary Kasparov, it did so by “brute force”, by using a supercomputer to analyze the outcome of every possible move, looking further ahead than any human possibly could. That wasn’t Machine Learning or AI.

But In 2016, IBM’s Watson software beat top Jeopardy game champions by “learning” from books and encyclopedias. IBM only created the program that enables the computer to learn. The software makes use of a “model” from example inputs to make predictions vs. following strictly static program instructions (logic defined by human developers).

Machine learning is a type of AI (Artificial Intelligence) that enables computers to do things without being explicitly programmed by human developers. Rather than explicit programming, Machine Learning algorithms identify rules through “training” based on many examples. 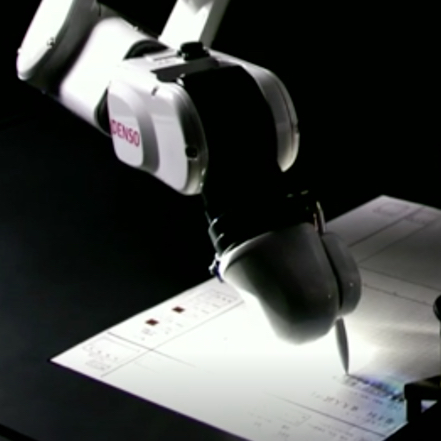 The photo above is the Todai Robot in scored among the upper 20% of students in Japan’s university entrance exams. Writing essays using a pen on paper. In Japanese. It knows 8,000 Japanese words, 2,000 mathematical axioms, and uses “symbolic computation” for “automatic reasoning” on 15 billion sentences. Back in 2014.

In 2017, the top ranked player in the Chinese game Go was defeated by Google’s AlphaGo, which is based on Google’s DeepMind acquisition. The software made moves that many considered illogical. BTW, Go is considered the most complex game ever invented. Whereas chess players have, at any given turn, an average of 35 possible moves, on a Go board’s 19-by-19 grid, there are 250 possible moves.

Also in 2017, all top-ranked poker players were bested by software named Libratus from Tuomas Sandholm at CMU. The software adjusted its strategies during the tournament. And its algorithms for strategy and negotiation are game-independent, meaning they’re not just about poker, but a range of adversarial problems.

Rather than neat rows structured in fixed columns and rows within tables, AI computers deal with less structured data, such as (natural language text, images, and videos).

Use of hard-coded (static) “rules” crafted by human programmers is called “symbolic AI”, used in “expert systems” fashionable during the 1980s.

Machine learning algorithms identify information from data fed through “generic” (general purpose) algorithms which build their own logic from detecting patterns within the data.

Patterns are recognized by neural network algorithms. This cycle of “learning” is implicit in a definition of Machine Learning by Mitchell (in 1997): “A computer program is said to learn from experience E with respect to some class of tasks T and performance measure P if its performance at tasks in T, as measured by P, improves with experience E”.

The “network” in a neural network has multiple “layers” or data-processing modules that “distill” data. Models using a small number of layers are called “shallow learning”. GoogleNet in 2014 used 22 layers. In 2016, one network uses over 1,000 layers.

By contrast, the human brain has 300 million modules that recognize patterns, each having 100 neurons.

At the input layer, the network trains on a specific set of “features” and then sends that information to the next layer. That next layer combines previous conclusions with other features and passes it to the next layer, and so on, sequentially.

An example of the last layer which presents the output/decision (from recognizing what number is written down in a photo from the MNIST collection) is a 10-way “softmax” layer returning an array of 10 probability scores (all summing to 1). Each of the 10 contains the probability that the digit image belongs to one of 10 digit classes.

Machine learning uses some terms that have alternate meanings for words also used by traditional programmers and statisticians:

The supervised learning approach aims to predict an output given an input by making use of a labeled data set of training data (examples) to which we know the “answer” or target. It gets feedback on what is correct or not. The training correlates features to outputs in order to predict outputs based on new inputs.

Recurrent networks have a network topology in which data flow itself is recycled. It is used, for example, to generate sequences of words from the vectors describing the “meaning” of pictures. Each word depends on all that have already been produced.

RNTNs are better than feed-forward or recurrent nets with data with a hierarchical structure (binary trees), such as the parse trees of a group of sentences.

Convolution means use of the same filter (also called a “kernel”) across the whole image, just like use of a filter in Photoshop.﻿ Clarifai uses a convolutional net to recognize things and concepts in a digital image. It then presents similar images.

Kernel methods are a group of algorithms for classification. Support Vector Machine (SVM) being the best known from Vapnik and Cortes in the early 1990s at Bell Labs and Vapnik and Chervonenkis as early as 1963. SVM classifies by finding in training data “decision boundaries” between sets of points belonging to different categories. Classifying new data points involves checking which side of the decision boundary they fall on.

Used in both feed-forward and (unrolled) recurrent networks is Backpropagation to update weights so networks learn (improve). * The Deep Visualization Toolkit illustrates the intermediate process.

The “unsupervised” part of unsupervised learning means it makes use of a dataset without labels.

It uses “feature extraction” to discover a good internal representation of the input. It identifies the structure of data to solve some given task.

It uses “Pattern recognition” to classify patterns and clusters data.

A hidden layer in Autoencoders provides a bottleneck of nodes reconstruction of input layer. So they can be used for image compression.

The “restricted” is because there is no connection among nodes within its layer.

RBM is like a two-way translator. RBM determines the relationship among input features.

In training loops, RBM reconstructs inputs in the backward pass.

RBM uses a measure called “KL Divergence” that compares actual to recreation of data. RBM makes decisions about what features are important based on weights and overall bias.

All this means that data in RBM does not need to be labeled.

As an example, to determine whether an animal is acerous or not acerous (has horns), it look at features such as color, number of legs, horns.

Reinforcement learning does not provide feedback until a goal is achieved. Its objective is to select an action to maximize payoff.

In Dec 2013, Volodymyr Mnih and others at DeepMind.com (a small company in London) uploaded to Arxiv a paper titled “Playing Atari with Deep Reinforcement Learning”. The paper describes how a “convolutional neural network” program learned to play several games on the Atari 2600 console (Pong, Breakout, SpaceInvaders, Seaquest, Beam Rider) by observing raw screen pixels of 210 × 160. The program learned by receiving a reward when the game score increased. This was hailed as “general AI” because the games and the goals in every game were very different but, without any change, learned seven different games, and performed better than some humans in three of them. * Their Feb. 2015 article in Nature gave them widespread attention. Then Google bought DeepMind (for $400 million).

(aka Probabilistic Programming) is where a neural network learns from one (or a few) examples, as opposed to a large amount of data.

“Deep learning” is a specific subfield of machine learning. The “deep” in “deep learning” is not about “deeper” understanding, but about the depth of various filters in a multi-stage information distillation operation. Each stage extracts some meaning from different representations of the input.

Deep learning learns all layers of representation “greedily”, in parallel at the same time, rather than each layer in succession. Intermediate incremental representations are learned jointly. Each layer is updated to follow the representational needs of layers both above and below itself.

Python or R is supported.

Python is extended by libraries:

Although Python is vastly more popular, there is a Java library that can run on both Scala and Clojure.

Adam Gibson at SkyMind developed Deeplearning4j (referred to as DL4j) to be commercial-grade library to run on a distributed, multi-node setup. It comes with GPU support for distributed training.

In it one can select values for its hyper parameters.

NOTE: Here is a ranking of Deep Learning frameworks based on GitHub star count.

Tensors generalize matrices to an arbitrary number of axes (3 or more “dimensions”).

A tensor that contains only one number is called a “scalar” (aka “scalar tensor”), also called a “0D tensor” because in Numpy the ndim attribute of a scalar tensor has 0 axis (ndim == 0). (Yes, it confuses axis with dimensions)

An array (list) of several numbers is called a vector or 1D tensor having one axis. As Lecun explains it:

An array of vectors is a matrix, or 2D tensor of two axes.

Each vertical “column” is like a variable. The first one has values 1, 10, and 100 from the three lines (rows), which are akin to a set of observations for a particular point in time.

“Selecting” specific elements in a tensor is called “tensor slicing”.

5D tensors containing video data use the reshape layer. See https://github.com/anayebi/keras-extra for using Extra Layers for Keras to connect a RNN (Recurrent Neural Network) to a Convolutional Neural Network (CNN) by allowing the CNN layers to be time distributed.

The goal is to derive models that generalize.

When using its training data, a “loss function” is used to measure how well a neural network layer meets its objective. Thus, some call it an “objective function”.

It is called a function because it’s the result of changes, and thus used to determine whether changes are moving in the right direction. Changes are made to minimize the loss function.

The number of data values is typically split into a training set, a validation set, and a test set. This is so we don’t evaluate data using what was used for training in order to avoid overfitting.

An “optimizer” is the mechanism a network uses to update itself (based on data received and loss function values). It implements a specific variant for stochastic gradient descent.

To address shallow learning problems, where structured data is available, “gradient boosting machines” have been used.

Practitioners of gradient boosting make use of the XGB library, which supports both the two most popular languages of data science: Python and R.

YOUTUBE: A friendly introduction to Deep Learning and Neural Networks by Luis Serrano

Adam Geitgy’s introduction of Machine Learning https://medium.com/@ageitgey/machine-learning-is-fun-80ea3ec3c471/ “for anyone who is curious about machine learning but has no idea where to start”

Enterprise Machine Learning in a Nutshell free class from SAP.

This is one of a series on AI, Machine Learning, Deep Learning, Robotics, and Analytics: