If you need more than 16 GB RAM or add PCI add-in cards, build an (unsupported) Hackintosh desktop on PC hardware. For example: a water-cooled i7–8700k processor, 8GB RX580 graphics card for a 4K LG HDR monitor. Oh, and a pair of Yamaha HS5 studio monitors (speakers) with a Roland audio interface. Plus SSD and HDD storage.

talks about the Clover Boot Loader

Alas, Apple’s Kalamata project announced they will use their own chips instead of Intel chips which make Hackintosh possible via an x86 boot loader.

Find your serial number then confirm your warranty and support status:

Identify your Mac for tear-down instructions such as for MacBook Pro A1398 (Retina, 15-inch,Early 2015).

Dropping a Macbook can crack the screen.

A protective case can absorb some abuse, but adds to weight.

Unlike some PCs, MacBooks do not have a slot for physical lock as many Windows PCs have.

To put a Mac at the end of a cut-proof cable, consider the docking station from Landing Zone. Install its driver from: https://landingzone.net/driver-lxd

iPhones require a T6 Torx 0.6 screwdriver. The Phillips PH#00 is a little too big.

Screws on the black hindge edge are longer.

The Macbook Pro has always had a history of running hot.

If you’re only using power when plugging into the Mac’s USB hub connector, use an external USB power that plugs straight into the wall outlet.

Use of an external monitor may also cause the fan to engage. 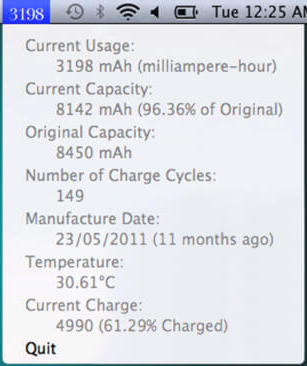 The number shown at the top is 0 (zero) when the laptop is plugged in.

15 inch diagonal MacBooks use a 85 watt charger cube. Newer ones from 2017 have a removeable USB-C cable. This solved a long-standing issue with the cable fraying near the plug.

That may be a good thing considering Apple’s 85W charger costs $79 on Amazon and elsewhere.

2015 Macbooks don’t come with older USB-B ports so one has to buy $19 Apple proprietary adapter cables.

New Macbooks combine power and communication (Ethernet) into a single proprietary oblong rounded USB-C connector. USB-C connectors can be inserted on either side (unlike earlier USB plugs). It follows the USB 3.1 standard, which has a theoretical maximum speed of up to 10Gbps (gigabits per second) – two times faster than USB 3.0. But the Macbook is at 5Gbps for now.

USB 3.1 support is used by Apple’s $79 HDMI/VGA connector and by upcoming MHL (Mobile High-definition Link) 3 devices to stream 4K video from mobile devices to TV sets. That would obsolete ChromeCast.

Get a USB-C to USB-B cable. Plug it into a battery pack and you can charge the laptop.

This $90 adapter from Amazon works for me: 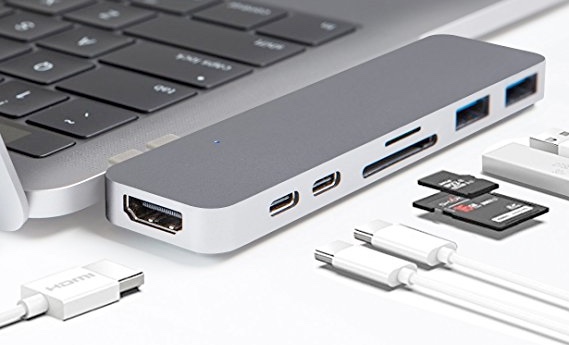 To see the impact of a cable vs. Wi-Fi:

If I installed a QR reader on my iPhone, I can read a QR code to take me to the URL represented by the code.

You can read a printed QR code by holding up to your Mac’s Facetime camera using app “QuickMark” VIDEO. BTW there used to be a $2.99 QR Right app.

MacOS apps QReader and “QR Journal” for those with the Apple iSight A1023 USB external camera from 2003 (or iSight compatible). It connects to the Firewire port on older Macs. And some reviewers report crashes.

The $16 SwitchResX app is advertised as a screen size formatter for Mac Retina-friendly HiDP screens and for making Macs into teleprompters (where a pane of transparent glass reflects a screen so that only the speaker can read).

How can one read a QR code appearing on a Mac screen?

After you create a QR code using qrstuff.com and download the png file, or use an image editor to create an image file containing a QR code, upload the file to:

Alternately, install imagemagick as a dependency to this app using Homebrew:

Then specify the file:

The response should be the text (URL) embedded in the QR code image.

If you drag and drop didn’t work on the Trackpad, relaunch Force Quit the Finder.

If that still doesnt’ work, follow this blog which advised from the OS X Finder, hit Command+Shift+G for the “Go To Folder” screen to specify ~/Library/Preferences/ as the destination. Then drag:

Pen tablets are useful on Photoshop, Sketch, Pixelmator and other paint and calligraphy programs. Google’s training videos use them for live illustrations.

Some professional drawing tablets are hundreds of dollars.

NOTE You can turn the touch pad on MacBook Pro laptops into a drawing tablet by installing the $29.95 Inklet OSX program which runs in the background.

If you have a new Apple MacBook Pro, Inklet takes advantage of its “Multitouch Force Touch” trackpad that senses different levels of pressure.

Inklet recognizes those squishy rubber-tipped capacitive stylus given out by vendors at conferences and sold at dollar stores. For more precision, Inklet’s $44.90 combo package includes the $19.95 Pogo stylus (not the https://www.amazon.com/Ten-One-Design-T1-PGCT-302-Bluetooth/dp/B009K448L4/ Pogo Connect or Magnus Air even though they are also useful on 3D touch iPhone and iPads.)

Inklet has a palm rejection feature that ignores where hands typically rest on the touch pad while drawing with the stylus.

Open a drawing program before opening Inklet tablet mode by a) clicking on the droplet icon and select ‘Start Inklet’, b) sliding across the bottom of the track pad. or c)vuse the hotkey control+option+i. A transparent workspace appears where drawing occurs from the trackpad.

I like some cushioning for where my palm touches the cold hard keyboard and on sharp edges of the Mac Pro Retina laptop.

In https://support.apple.com/en-us/HT203671 Apple recommends against use of palm pads, as the pads puts uneven pressure on the display glass.

The pads also cause a line of dust on the screen.

Unlike the much better looking leather $29 TwelveSouth, the $9.99 GRIFITI Palm Pads is removeable (rests on rather than glued on the keyboard), so it can be taken off before closing the cover.

MacOS has a single command to obtain details about your machine in a single file.

Good to provide tech support when you’re dealing with a nasty problem.

There is a lot of information, so we use it to show use of some command-line kung fu:

This is rather geeky, but just so you know:

-a lists all the currently available non-opaque values.

detailed description of these.

In the dialog for the additional screen, select 270 for the vertical screen. WARNING: Use of additional screens often cause the laptop fan to activate due to the additional heat from additional CPU usage. The Mac Pro 15 inch retina display is preconfigured to a screen resolution of 1440 wide x 900 high,
but a browser window of 1440 x 738.

To control Phillips Hue light bulbs from your Mac’s menu bar, get and install Colors for Hue 4+ by Furiki Designs. Click on the hub’s button.

Until Apple realizes how annoying it is to have that start-up sound on a Mac, create in the /Library/Scripts folder shell scripts containing osacript (Applescript) commands to mute sound automatically before reboot, and un-mute after reboot.

For more about Applescript commands and hooks, see this.

All Macs have a microphone that picks up your voice and other sounds in your room.

BLAH: To mute the internal microphone on a Mac, there is NO icon among dedicated keys on the keyboard like there is for speakers. A terrible oversight because that’s just as important.

The easiest option is to get the MuteMyMicFree app by Michal Konrad Owsiak:

Alternately, if you’re afraid of or cannot install downloaded apps, reduce the input volume to 0:

This works by changing the audio input to the line-in, also known as the audio input port on your Mac. This method works as long as you don’t have any audio input device connected, such as an external microphone or some other line-in device.

Drives in newer 2017 Mac Book Pros have SSD chip cards instead of drives.

Drivers for an MBR (Master Boot Record) Partition Table can handle up to
2TB of disk space per partition. To list partitions:

By design MBR contains space for only 4 primary partitions. One partition can be an extended partition where logical partitions can be defined.

Drivers for a GUID / GPT Partition Table can handle up to
8 Zettabytes (ZB) of disk space per partition.

SCSI devices can have up to 15 partitions.

The default partition type is 83 for Linux, 82 for Swap.

DOTHIS: To show partition tables for a particular disk: In a Terminal window invoke:

Eject the disk from the Finder (or use the unmount terminal command if you’d like). If you don’t do this, you may get a Resource busy error message during the following step.

(replace disk0 with the relevant disk number and replace 2 with the index number.

One of the folks at Sketch (the Mac photo-editing tool) noticed that Daisy Disk didn’t map all the disk space usage.

The squarish holes are thunderbolt ports for devices such as hard drives, monitors, etc. Apple sells adapters for connecting to DVI, HDMI, and VGA monitors as well as LN45 Ethernet.

There are 2 squarish miniports, so you can chain up to 10 thunderbolt devices.

PROTIP: A display that isn’t compatible with Thunderbolt must be the last one in the chain.

Thunderbolt can transfer at speeds up to 20Gbps (higher speeds than USB).

To watch BluRay disks, get a Samsung external drive and software.

To list USB ports, use this Linux command brought to MacOS by https://github.com/jlhonora/lsusb

An example response for my machine:

This is one of a series on MacOS: