How to switch among versions of JavaScript using nvm and npm

The objective of this tutorial is to spare you the pain and confusion around installing, updating, and uninstalling the various editions and versions of Node (aka NodeJs, with Js for JavaScript). 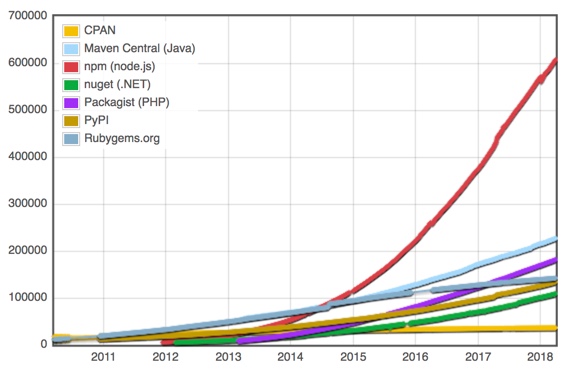 Popularity is manifested in the number of new modules being contributed. And Node is fast. It’s portable. What’s not to like?

Installing Node has become complex due to the drama behind different editions and versions of Node with different mechanisms for managing updates, each with permissions issues.

For these reasons, many instructions on the internet are outdated, contradictory, or plain wrong.

Node.js was started as an open-source project in 2009 by Ryan Dahl. Its second contributor was Isaac Schlueter who now leads the project. The project had a total of 447 core contributors as of 2016. Dahl was employed by Joyent.com during much of Node’s development, and Joyent continues to sponsor Node. Joyent has raised in the neighborhood of $100 million in venture capital and has an employee headcount in excess of 120. Joyent as a cloud computing company was purchased in 2015 by Samsung (Korea).

Long Term Support releases, introduced Fall, 2015, are actively developed for 18 months, then maintained for a further 12 months. This means a particular LTS release stays in production for 30 months with bug and security fixes.

There are two versions active at the same time.

N|Solid from NodeSource is a “fully compatible Node.js runtime enhanced to address the needs of enterprise production support.”

Their disto provides a GUI and a way to pull telemetry for V8 process monitoring.

A VentureBeat article in 2013 writes “Two programmers named Ben Noordhuis and Bert Belder have founded a new company called StrongLoop. And they’re apparently attempting to hijack the Node brand and community for themselves.” Strongloop supports Express and LoopBack frameworks. On 10 Sep 2015, StrongLoop was acquired as IBM API Connect, which focuses on the API lifecycle.

In 2013 iojs.org, a fork of Node.js was formed by several core committers frustrated by Joyant.

Then on September, 2015, io.js merged with the Node.js project again under new nodejs.org/en/foundation governance.

Which version of what?

QUESTION: What are the install instructions If you’re an enterprise user paying for LTS?

Instead of using an internet browser to download an installer from
https://nodejs.org/en/download/releases/
consider these:

Ideally, we would have both nvm and npm on the same machine, each configured the way we want for maximum productivity.

However, there is a conflict between the ideal way of installing npm with how nvm works.

The ideal way to install most applications is to NOT need to use the sudo prefix command to temporarily elevate permissions.

On a Mac, by default, npm is installed in the .npm folder.

To make it work, we install it in the .npm-packages folder by placing a configuration setting.

However, nvm does not recognize that configuration setting and thus only works with plugins installed in the default .npm folder.

Yes, why can’t people from nvm and npm get together and work things out?

Thus, a choice needs to be made.

Click on one of the mutually exclusive variations of installing Node for additional information and instructions:

These instructions are used when both verifying a new setup and when obtaining facts when troubleshooting an established setup.

PROTIP: Before you speak to someone about this, provide them your operating system facts, obtained using instructions here:

NVM (Node Version Manager) downloads and installs multiple versions of Node.js, then enables using a specific version of Node, using a command such as this (after installation and cd to your node app folder):

The above is for the LTS (Long Term Support) version.

If instead you want to run the latest versions of Node:

PROTIP: Remember that there is no “v” to specify a version, unlike the install command:

To do the above, you first have to install NVM and Node, described in the steps below.

Install node and .npm-packages without npm

BTW, an alternative to NVM is “N” from https://github.com/tj/n. However, I never got it to work for me.

This installs the node packages locally within whatever folder is the present working directory, revealed by the pwd command.

However, we usually need node packages to be installed globally for access from any present directory by any user on the machine.

This location is one MacOS requires sudo (super user do) permission elevation. For example:

Without sudo, an error would occur from the above command such as:

This is because the default npm folder is managed at the system level, not user level.

To avoid these permission issues, some recommend higher permissions to folders, as in:

This may not be enough to address installation issues when using Homebrew such as when upgrading with command:

We can install the folder under a user’s HOME folder, which is defined by the ${HOME} environment variable:

The alternative npm folder name established by convention is:

To achieve this, we first need to uninstall the default install:

All of Node needs to be uninstalled because it installed npm which uses the system folder.

To install node for global use, we can invoke

To enable publication on NPM and Bower, packages such as Datatables contain extensions and styling options in well defined CommonJS and AMD loaders. This also opens options to use other tools such as Browserify and WebJars.

Others who have blogged about this include:

Bower is similar to NPM, but for front-end GUI applications.

Any frameworks or 3rd-party libraries that need to be accessible in the user’s browser will be managed by bower.

A module is a single JavaScript file.

A package is a directory containing modules.

A list of shorthands for the NPM command
https://docs.npmjs.com/misc/config

Famous Node modules are listed below.

An alternative to NPM is yarn, which uses Node to generate software.

Yarn is used by https://github.com/dancancro/great-big-example-application

To install it on a machine with NPM already installed:

The classic interactive tutorial introducing Node.Js was created on:

To install it we reference its npm package on npm.org:

HEADS UP! This article was written for an older version of node. More up-to-date information may be available elsewhere. https://howtonode.org/introduction-to-npm

I use Node.js (via browserify) for each of my web apps, all of which have some dependencies in common and others specific to themselves. Each of these apps has a package.json file that specifies which versions of which modules it needs.

Yes, that is what npm install does. In node.js code, the require algorithm has a particular sequence of places it looks, including walking up the filesystem. However, npm install doesn’t do that. It just installs in place. The algorithms it uses are all constrained to just a single node_modules directory under your current directory and it won’t touch anything above that (except for with -g).

Right now, I have a /node_modules directory in the parent folder of my apps for modules that they all need to reference, and then I put app-specific modules in a node_modules folder in that app’s directory. This works fine in the short term, since my require() statements are able to keep looking upward in the file structure until they find the node_modules directory with the correct app in it.

Where this gets tricky is when I want to go back to an old project and run npm install to make sure it can still find all the dependencies it needs. (Who knows what funny-business has occurred since then at the parent directory level.) I was under the impression that npm install did this:

When I run npm install inside an app folder, however, it appears to install everything locally regardless of where else it may exist upstream. Is that the correct behavior? (It’s possible there’s another reason, like bad version language in my package.json). If this IS the correct behavior, is there a way for me to have npm install behave like the above?

It’s not a big deal to widely replicate the modules inside every app, but it feels messy and prevents me from make small improvements to the common modules and not having to update every old package.json file. Of course, this could be a good thing…

Yeah basically you’re doing it wrong. The regular workflow scales well to the Internet. For your use case it creates some extra tedious work, but you can also just use semantic versioning as intended and specify “mylib”: “^1.0.0” in your package.json for your apps and be OK with automatically getting newer versions next time you npm install.

If installed using homebrew so it’s done on every shell session: Add to ~/.profile

This is one of a series on MacOS: