Stay focused and do things faster with Keyboard Shortcuts, HotKeys, and StreamDeck buttons

This topic is about how you, a Mac user, can stay focused so you can do things faster with less effort by configuring your keyboard and mouse and automating common actions.

PROTIP: Optimize for keys we use most, and avoid common mistakes with keys we accidentaly press.

You’ll feel less stress when you can get things done like a pro. Amaze your co-workers.

REMEMBER: “Special” keys on a Mac’s keyboard are represented by both symbols and names:

You can change them using this dialog: 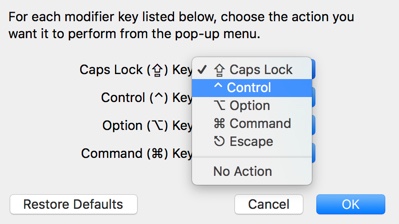 BLAH: The Esc (Escape) key is too far North on the keyboard and forces some to look down on the keyboard. And the Caps Lock key is too close to keys, causing problems with accidental password entry and lockouts.

BLAH: It’s annoying when all of a sudden everything I type is in caps. That happens because I accidentally had my hand too far to the left when I intended to press the A key.

Anyway I’ve gotten used to typing all caps by holding down the shift key with my left or right hand.

There is a difference between Sleep and Hibernate https://ladedu.com/how-to-understand-sleep-vs-hibernate-on-a-mac/

On a Terminal, the command is “pmset sleepnow”.

However, every week or so you would need to charge it by plugging in a Thunderbolt cable (same one as iPhone and Magic Mouse).

PROTIP: Some who are used to Windows and need to go back and forth prefer to switch the Mac’s control and command keys in order to get to all such keys using thumbs. This would also allow you to press two keys at once by pressing between the keys, thus able to perform most combinations using your hands.

However, on the 2017 Mac without a visible Function keys, key combinations to reveal those button are so awkard to use that it’s faster and easier to use a mouse or trackpad.

Since the fn and control keys are only on the left side of a MacBook keyboard, using them requires a Carpel-tunnel Syndrome-inducing moves of the left two fingers:

On 2020+ keyboards (after Apple came to their senses):

PROTIP: The fn key is easy to find without looking because it’s at a corner. But use a companion key on the right side of the keyboard.

Apple components from any active app

[1] = PROTIP: This command does not work when the active program is in an extended screen.

You can do the above automatically when installing this Python script.

It’s free but note the package has many lingering issues.

Touch Typing: eyes on the screen, not at the keyboard

PROTIP: Although most keyboards have a bump on “F” and “H” (“Home”) keys, I and some others put tiny drops from a glue gun on strategic keys so I can orient my finger to reach strange keys in the dark without looking:

PROTIP: I find (RGB) keyboards that light up keys in different colors distracting. I personally think the best strategy is to find a way to not have to look at the keyboard at all.

Avoid reaching for the mouse

TL;DR: PROTIP: Resourceful coders make it so they don’t need to waste time and valuable focus reaching for the mouse.

This may be a generalization. But many top coders like the vi text editor because it doesn’t demand use of difficult-to-reach keys or mouse which require users to take their eyes off the screen. DevSecOps coders have no choice because some operating systems only offer only vi (such as during Kubernetes exams).

I like to have a clean “full screen” without the distraction of all the Apple Mac icons at the top, bottom, etc.

For a $19 one-time purchase from symless.com, the Synergy app on Mac, Windows, and Linux enables you to use a single keyboard and mouse for use on all machines, copying and pasting from a Mac to a Windows machine to a Linux machine.

It does not support iPads, which Apple’s Universal Control does supports.

Needing to change habits learned typing is difficult and takes time. It’s literally taking physical therapy. This is perhaps the most frustrating aspect of changing from Windows to a Mac.

Here are the most problematic among Keyboard mappings using a PC keyboard on a Macintosh on Microsoft’s website:*

The Delete key on an Apple keyboard (⌫ on older keyboards) is actually the backspace key to all other operating systems. To press the equivalent of the Windows backspace that removes to the left of the cursor:

The ALT key on Windows is OPTION on Mac keyboards.

To send key commands from a Mac into a Windows instance inside VMWare Fusion.

Sending the equivalent of Windows keyboard Insert on a Mac is problematic, especially within a virtual Windows machine.

PROTIP: To evaluate Mac developers, some interviewers ask “show me how you enter and exit Full Screen”. This is because they assume that the most productive developers work with their hands always on the keyboard.

Windows has its F12 key. Apple has Mac users do the equivalent of a double Summersault with your fingers. How do you type, at the same time:

PROTIP: To toggle Full Screen view using the default configuration from Apple: while keeping your left forefinger on the F “home” key, reach with your left thumb to hold down the control key. This may hurt at first (until you get used to it). Try raising your hand

Now, while keeping your right forefinger on the J “home” key, reach with your right thumb to hold down the command key on the right side of the Space Bar. Then you’re in position to press F with your left forefinger.

PROTIP: A big benefit of working from home is that I don’t have people sitting nearby. So now I can enable voice recognition to automatically type some (not all) keys.

This has been available since the OSX Yosemite version: https://support.apple.com/en-us/HT203085

See this video to give it a try:

Press shift plus the above reverses the cycling direction.

Stop on the icon of the app you want to make active.

The trackpad on OSX recognizes multiple touch points (fingers) at once.

Use my installer for Mac to setup this program along with all others by running repeatable Ansible declarations.

There are several dimensions:

To reset during open, in the Application folder, hold down all keys SHIFT OPTION COMMAND then click the app’s icon.

NOTE: MacOS defines most of its keybindings for editing text in:

PROTIP: Remap home and end key by creating folder ~/Library/KeyBindings/ and in it file DefaultKeyBinding.dict containing a property list like this:

This change requires a reboot.

I probably click the Finder Favorites more than anything else. So I’ve memorized the keyboard keys.

This enables me to remove default items in the Favorites list (by right-clicking on it) so I can instead list my own folders I use most often. 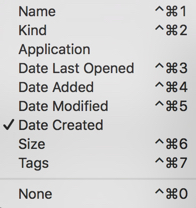 Under Favorites, click on your user name (next to the house icon). If the Library folder does not appear:

Apple’s System Preferences is a dialog I go to often. But it doesn’t have a default universal keyboard shortcut.

So let’s make one, using control+command+comma. (I use my middle finger to reach the comma).

To use macros, add to Chrome browser the iMacros for Chrome.

Among the Keyboard Shortcuts for Outlook on macOS:

Hide the reading pane or show it below = Shift+ COMMAND + Backslash ()

For autocomplete in TextEdit, press Tab + Esc. Unfortunately, this is the same key to toggle the Mac’s text-to-speech.

For the ©Copyright symbol, press the “alt” key (or “option”) and hold it down while typing “g” on the keyboard.

This website and others make use of special coding to represent Apple icons and keyboard icons.

Below is modified from Joe Weaks

https://github.com/pofallon/sublime-phantypist
Slowly output the contents of the clipboard into the currently active tab, one character at a time. Map to CTRL-SHIFT-V for a slow paste command.

https://gist.github.com/xaviershay/6656216
Creates a mapping that will type out the given text into vim.

Instead of the built-in command+Tab to switch among active programs, follow Daniel Szpisjak’s How to become a modern magician? - productivity tips for devs on macOS describes setup and use of Hammerspoon Lua language which uses a complex combination such as Shift+Control+Option to be a “Hyper” key such as the CapsLock. Karabiner+Elements

Assign Hyper+X to a specific program, and the pop-up shown by command+Tab will not come up.

Tmux is a contraction of “Terminal Multiplexer”. The “multi” refers to multiple sub-windows like multiple tabs on a browser window.

Video creators especially appreciate being able to, so they can concentrate on talking, push a button and have a sequence of keys to do what they need, such as share screen 2, leave zoom, etc.

The Stream Deck has programmable buttons, with each button like a little LCD screen.

VIDEO: Unlike a regular keyboard, each button on the Stream Deck can display different images. It provides a visual button you don’t have to remember.

The Kinesis Advantage keyboard has a phone plug to connect to a foot peddle to press the “Enter” key.

Although pricey at $340 from Amazon (perhaps the most expensive keyboard available), the “Advantage2” keyboard from Kinesis-ergo.com (at Bethel, Washington state) makes it easier and faster for your fingers to reach keys due to its unique contoured key wells. Its keys in the middle transfer more work to thumbs than conventional square keyboards. 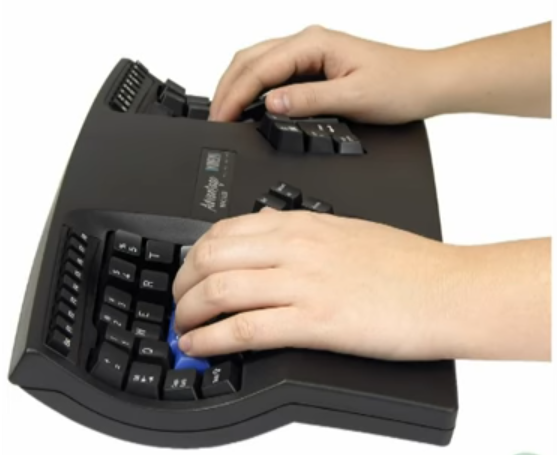 However, the keyboard does take some “learning time” as its keys are in a different location than on conventional keyboards. The manufacturer has a 7 day return and 3 year warranty policy.

But I don’t think the Red keys arenot much quieter than other keyboards. (Razor Opto-mechanical Red or Ornata v2 membrane keyboards seem the quietest to me. They are also have short 1mm travel to activate and quickest debounce delay).

Further quiet may be achieved by lubrication or replacing key switches with rubbery Zilent keys.

(I don’t know how the keyboard responds to “rollover” of several keys almost simultaneously, which other keyboards call “anti-ghosting”).

For even faster operation, use the keyboard’s 2MB of memory on-board to store SmartSet Programming Engine macros.

This is one of a series on Mac OSX: