To diagnose and troubleshoot getting started (vs. Linux)

This article describes the boot-up process on MacOS vs. Linux so you can better diagnose and troubleshoot issues.

On new MacBooks with the Touchbar, the power button is NOT MARKED at the upper-right corner of the keyboard. This is because the button also doubles as a finger scanner.

WARNING: I often get an undesired pop-up for Siri because its button is next to the power button:

PROTIP: When the keyboard and mouse are not responsive, hold down the start (power) button for a hard reset.

While pressing the power/start:

After powering up your Mac, a folder with a question mark means that a boot folder (described below) was not found on the hard disk.

If pressing the start button does not work:

If that doesn’t work then try to remove one RAM memory chip and switch places before repeating the above.

Prior to OS X Lion in 2011, one had to insert an OS X DVD or USB installer. That was a hassle.

With Lion onwards, Apple added a 2GB hidden recovery partition on the Mac’s hard drive to boot up in Recovery Mode. 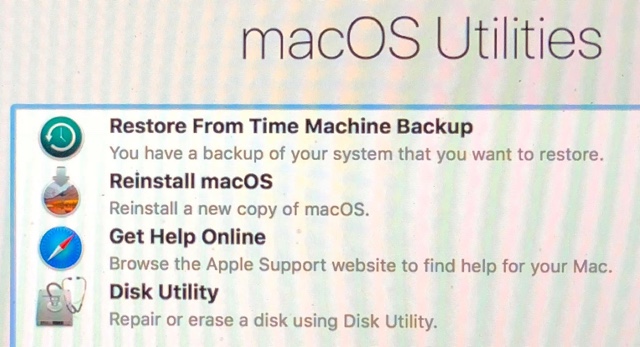 MacOS does not use the GRUB boot loader other Linux machines store in the /boot folder.

The MacOS kernel, as of Yosemite (version 10.10), is at
/System/Library/Kernels/kernel but was just /mach_kernel in older versions.

Third-party extensions are in
/Library/Extensions/

You’ll be glad you have a bootable CD or USB drive when you are installing macOS Mojave onto multiple Macs and would rather not wait to download the installer on a secondary machine (which you may not have).

So be prepared and do what this says: https://support.apple.com/en-us/HT201372
Create a bootable installer for macOS for each version of MacOS.

The macOS Mojave installer software is just over 6GB, For Mojave, the link is https://apps.apple.com/us/app/macos-mojave/id1398502828?mt=12

The macOS Mojave installer software is just over 6GB,

See articles about this at MacWorld, 9to5mac, and osxdaily.

MacOS provices its launchctl utility for interaction with the OS X init script system deamon launchd which controls the services that start up on boot.

otool -L /usr/bin/login is the macOS equivalent of the Linux ldd command which lists the shared library dependencies of an executable or shared library.

Each operating sytem has its own set, including use of file pam_env.conf within folder /etc/security.

The low-level firmware runs before the operating system and initializes the various hardware components during the system boot process. That allows the rootkit to survive major system updates and even reinstallations.

A module for Intel Security’s CHIPSEC open-source framework finds rogue EFI binaries. CHIPSEC is a set of command-line tools which use low-level interfaces to analyze a system’s hardware, firmware, and platform components. It can be run from Windows, Linux, macOS, or an EFI shell. The new CHIPSEC module allows the user to take a clean EFI image immediately after purchase from the computer manufacturer, extract its contents and build a clean list of the binary files inside. It can then compare that list against the system’s current EFI or against an EFI image previously extracted from a system. If the tool finds any binary files that don’t match the clean EFI list, it’s possible that the firmware has been infected. The rogue files are listed and can then be further analyzed.

This is one of a series on Mac OSX: