Hello, I’m Wilson Mar [@wilsonmar], It was 2010 when, after years working on what came before Git, I knew Git will become essential for developers and testers. Since 2014, I have been holding live, full-day hands-on tutorials at conferences because skill with Git and Linux commands are pre-requsite to many IT jobs.

Along the way, I devoured every video and book I could find on the subject and listed them in my blog.

I’m also created tutorials on how to install Git clients and hook it up to repositories in the cloud.

Throughout this course, we are on a hunt to answer these questions about working with code.

You’ll learn in minimum time because I’ve spent a lot of time on sequencing your learning and on time-saving automation.

The focus of this course is on helping you to confidently contribute to open source, using techniques and utilities that top professionls use.

This means we often use commands to verify status after key steps. Verification steps are part of bash scripts I’ve created so that you can tell, on your own, whether you’re typed incorrectly or whether there’s some issue with the system. Having a script means you can change something to see how it affects the whole workflow. The scripts are a very unique aspect that I haven’t seen elsewhere.

Another special aspect of this course are the keyboard shortcuts pros use to boost their efficiency. At the end of each segment we review key learnings to make sure you have mastered each skill.

In this tutorial, we also learn how to recover from mistakes right after we try each command.

NOTE: Since the above video was created, GitHub has gone to free private repositories, but no longer free website hosting. Their $4 a month for “Pro” subscriptions does provide GitHub Pages hosting.

To recap the video, a “blob” is the set of characters in the last revision identified by a “hash” calculated from the text changed plus some metadata such as the data of the change, the person making the change, etc. The 7 characters shown is the first 7 characters of the full hash string.

There are several technologies you can use to work with Git version control:

Several others have created “cheat sheets”, but they are structured like a dictionary or according to how the program works, not the sequence how you work.

To start off, let’s look at the major chapters, marked by red numbered dots. The first diagram is about installation and configuration: 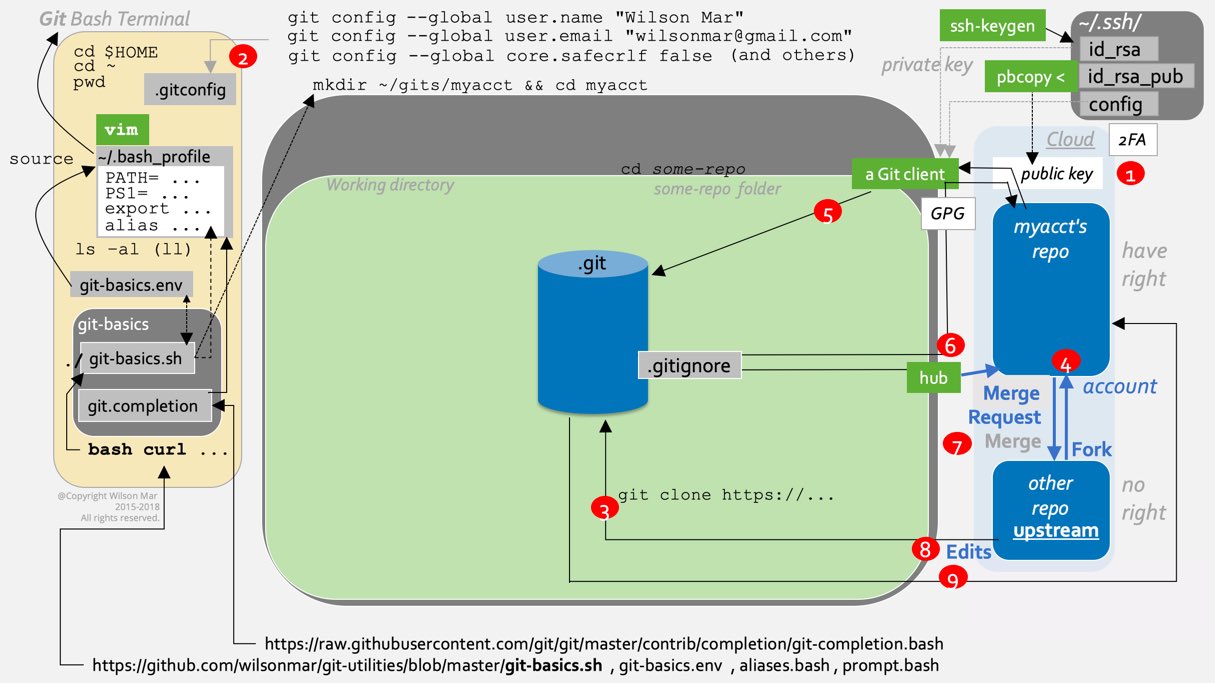 For an animated flowchart where you can click the Pause button or drag the timing bubble on the video’s timeline while watching:

BTW I’m working on a video in which I verbally narrate the video using text on this web page. Until then I have for you an animated diagram above.

This tutorial is designed for someone with a Git command-line client installed.

To make use of a terminal console on your laptop, you need to open the Terminal program on a Mac or, if you’re on a Windows machine, the Git Bash program installed.

Since a Bash shell does not come with Microsoft Windows machines, a bash terminal program called git bash needs to be install by the Windows Chocolatey installer installing the msysgit package. But you must have Administrator permissions to install them.

Ways to get a Git repository

PROTIP: There are several ways to obtain a repository in GitHub, GitLab, BitBucket, or other host:

A script types commands for you

An bash script was created to automatically type for you the various commands in this course. It’s to see whether what you are asked to type manually actually works. This is so we can see whether it was working before, so you don’t blame yourself for not typing commands correctly and waste time debugging.

Numbering of sections in the script:

9.x Get changes in origin to local

In outputs on Terminals, “$” precede commands issued by the script, so you can type the exact commands.

The script displays the time and other metadata about the run.

If needed, the git-basics.sh script installs a Git client using a package manager.

On Windows machines, the Chocolatey package manager is installed if not found.

The file contains a definition of the PATH the operating system searches for executables.

The aliases.txt file is concatenated to the bottom of the ~/.bash_ profile

This is instead of

Identify a public GitHub repository and something that you can contribute to, such as suggesting a typo fix. But you have no right to edit that repo. For example:

An “open source” repository available to the “public” can be accessed using an URL using https protocol even if you are not a designated collaborator with a right to alter it.

Such a repository we call an upstream remote or some other name.

You can click the “Star”, but you would need to be signed in under your own account.

We assume here that you have already opened a personal email account and used it to create an account on GitHub.com.

PROTIP: I use email accounts on both Gmail.com and Outlook.com so I can test sending emails.

PROTIP: It helps if you pick a unique handle that is available throughout various social media (Twitter, Medium, Instagram, etc.)

Before you can “Fork” another account’s repository, you need to enable your Git commands to have right to modify.

The right to alter a cloud repo is claimed by pasting the contents of your machine’s .pub (public key file) obtained by using pbcopy to put it in your Mac’s Clipboard, then pasted in the cloud GitHub/GitLab GUI.

The “rsa” in the default file name “id_rsa.pub” refers to the clever mathematicians who figured out how to encrypt and decrypt files without exchanging secret passwords. It works by generating two files – the public and private key file “id_rsa” – into your account’s ~/.ssh folder.

SSH (for secure shell) is the same mechanism the Linux team uses to secure its bash terminals. In fact, Git was designed by Linus Torvold and his team who developed the Linux kernel and its secure shell (SSH).

The ssh-keygen program that generates the rsa files comes with all Linux and Mac operating systems. First cd to the .ssh folder, then run the program. If you are using it for the first time, press Enter for all the defaults.

When there are multiple accounts, you can’t use default names and also must edit the config file to make sure the different accounts are specified correctly.

When the Git client runs, it retrieves the private key in the id_rsa file to encrypt what it sends. The GitHub or GitLab cloud service decrypts using the public key.

Here’s where you add value to that Open-Source repository.

There are two ways to create a new branch.

6.x Push and Push with tags

Unless you have been designated a committer in the upstream repository, you can’t directly push changes to it like you can with your own repo.

But you can send a request to committers of that upstream repo to pull and merge changes from your forked repo.

Each Git hosting service has their own GUI to make such requests.

That is why my script has “Press when ready” steps - for all three manual actions below:

Next, let’s look at what happens if, over time, changes occur in the upstream repo.

In this section we change something on GitHub/GitLab and then fetch it locally, see what changed, and merge it.

Allow all Git commands to use colored output, if possible:

Get the size of what was transmitted on the current repo folder:

But I have a script that installs them and other apps on a Mac according to a specification file. It’s at https://github.com/wilsonmar/mac-setup/master/blog/mac-install-all.sh

Pull rebase with git up alias

Use the Git utlity which resolves conflicts: It tries to find out which commits are really your local ones, and which had come from upstream in an earlier fetch.

As noted here, this finds the starting point for rebase by looking at the reflog of the remote tracking branch (the tips of successive git fetch operations on origin).

--autostash (introduced in git 2.9 of June 2016) automatically performs stash commands before the pull so that pull works even on “dirty” trees. The automatic commands are git stash save before the pull, and then when done git stash pop. This added logic which solved a trap in automation via aliases such as:

If there’s nothing to stash, the first command will do nothing, but then stash pop will unstash some random stuff from before.

CAUTION: There still may be changes introduced which cause a conflict when the stash pops after a successful rebase. An example:

Thoughtworks advocates for their Trunk-Based Development instead of using different branches, so every commit keeps the repository production ready.

VIDEO: Git patterns and anti-patterns for successful developers [20:25] at Microsoft Build conference May 7-9, 2018 by Edward Thomson (@ethomson) about Visual Studio Team Services says Microsoft now recommends Trunk-based Development, where coding is based on the trunk, which is a synoym for the master branch. Make Small, simple changes and integrate into the master branch. easier to code review small chunks fewer merge conflicts encourages pull requests simpler to ship, faster velocity

Keeping code isolated from other developers is Technical Debt. So code in feature toggle codes which allows features to be turned on or off in production.

[15:20] Microsoft does “Release Flow” releases to production at the end of 3-week sprints.

Like GitHub, Microsoft fixes bugs in master first so that they can’t be forgotten and create the same error in the future. The changes are cherry-picked into the release branch.

Other videos and articles

git-basics software is described by this video and blog from 2013 by @KBasarab and at:

Microsoft Learning on Azure created a series of textual tutorials in 2020: