This robot butler is simple, but not stupid

The object of this tutorial is provide deep but succinct commentary (without marketing generalizations) as we take a carefully crafted step-by-step hands-on tour. All on a single searcheable page.

Below is a map of my Ansible tour (TOBE: animated video), in which I cover one concept at a time: 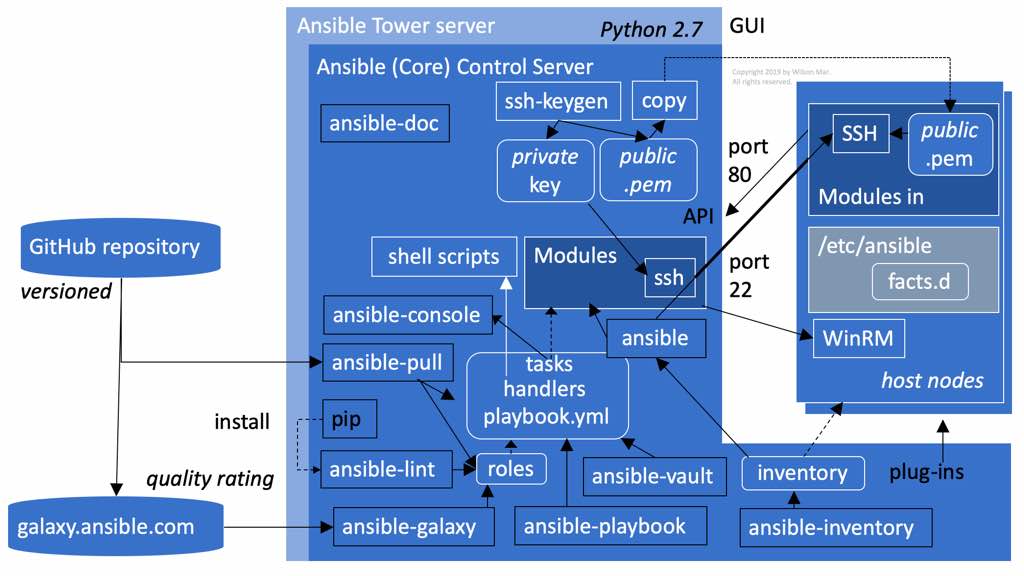 The objective of Ansible is to configure software within host nodes securely, but also quickly and easily.

The name “ansible” is popularized by the science-fiction book and movie “Ender’s Game” which uses what it calls an “ansible” to communicate, in real-time, with many ships at once, to many galaxies far away.

The ansible-galaxay command retrieves from the https://galaxy.ansible.com/ Ansible Galaxy website, which is a community-submitted repository of Roles that define the installation of many categories of software (database, etc).

The website shows a “quality rating” based on runs of the ansible-lint program which validate changes. The program used on by the website can be run on your server after being installed by pip to validate changes after downloading and editing.

When the ansible program is invoked, it delegates work to various Modules. Additional custom modules can be defined, such as for building assets within AWS using CloudFormation as well as other clouds (Digital Ocean, Linode, Rackspace, etc.).

The use of SSH (Secure Shell) is Ansible’s differentiatior. This is the approach that makes Ansible easy and secure because SSH is a standard tool in all Linux distributions for users to communicate with servers. SSH uses a commonly open port 22, one does not need to beg for special ports to be opened through the enterprise firewall (which one needs to do with custom agent programs used by Chef, Puppet, and others.

Use of SSH does require the Linux ssh-keygen program to create pairs of “cryptographic” key files. The public key is copied to each host node created. This does not compromise secrets because the private key stays on the machine where the pair is created. The SSH program encrypts communications with its private key for the receiver to decrypt using the public part of the key pair.

By default, JSON messages are communicated back to the Control Server’s API listening on standard port 80. Internally, Ansible uses the Django-REST framework, PyYAML.

Various modules run on remote hosts provide the plumbing for other networking protocols, such as HTTP, runing on remote machines.

Ansible plug-ins can also be downloaded and installed so Ansible can communicate via ZeroMQ “fireball mode” or other means.

To connect with Windows machines, Windows Remote Management (WinRM) is used (from Vista SP1 or Windows 2008 R1 and up).

Modules are invoked by a series of Tasks defined as plays in playbooks.yml files.

Instead of using a database server, Ansible stores declarations in text files of yml format (pronounced as “yamil”) that are both human and machine readable. So Playbooks can be edited by any text editor.

A task can trigger handlers (shell scripts) which run on some condition, usually once at the end of plays.

Plays map a group of hosts to roles. Each role is like a (subroutines) which make code in playbooks reusable by putting the functionality into generalized “libraries” that can be then used in any playbook as needed.

Within each host node, a facts.d in created within the /etc/ansible folder.

The @ansible Twitter account is titled “Red Hat Ansible” because it’s initiating author, Michael DeHaan from North Carolina (@laserllama), began writing Ansible in his spare time in 2006 while working at RedHat (after a stint at Puppet). His AnsibleWorks got acquired by RedHat in 2015. See the slides to his video Python-Powered Radically Simple IT Automation” at PyCon 2014.

His advice at All Things Open lightning talk Dec 3, 2014:

For example, checking “ENABLE PRIVILEGE ESCALATION” is the same as adding -b in ansible ad-hocc commands.

Tower installs within Linux base configurations at /etc/tower/settings.py. Look at this after install.

Ansible Tower makes use of a PostgreSQL database, either locally, remotely, or in a HA inventory group cluster. Tower provides Role Based Access Control (RBAC) to acccess its database via REST API. 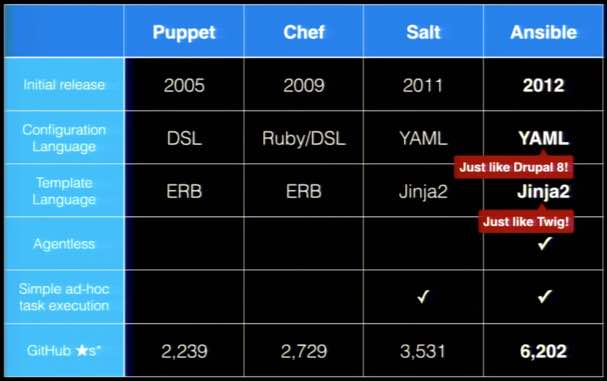 Linux Academy has the most complete set of video classes on Ansible:

Mercifully, Tower is not a significant requirement in the exam.

The (2) in Vagrant.configure(2) configures the configuration version.

Names between | (pipe) characters provide handles to identify each server.

Two spaces are used to indent.

Change 8080 to another port if it is already used by another process on your computer.

Linux machines instead install to:

But on Macs, as with all program installed on a Mac by Homebrew:

Ansible works under the concept of “idempotance”, where repeated executions of the same script results in the same state at the end of each run. If something doesn’t exist, it is created. If something does exist already, it is left alone and another isn’t created.

A function is “idempotent” if repeated applications has the same affect as a single (initial) invocation.

Ansible reads declarations of desired state (what is wanted after processing) rather than imperative programming commands (to do this and that in a specified sequence). This is like when you get in a taxi and you provide a destination address rather than providing turn-by-turn directions to that location.

CAUTION: When deleting roles, its dependencies are not deleted automatically, leaving orphans not used by roles that remain.

Let’s look at a playbook with full annotations:

Tweets about the book, #ansible4aws, is inactive since 2016 when the book was done.

The book provides an Ansible module in folder: library/vpc_lookup

PROTIP: Each Ansible module is associated with a command, and return JSON.

Notice the repos downloaded more than anyone is by @geerlingguy, Jeff Geerling (all around nice guy and Drupal expert jeffgeerling.com who has been contributing to Ansible community since early 2013.

In addition to series on Raspberry Pi and Drupal, he wrote ansiblefordevops.com completed 2020-05-13 on LeanPub).

Code for the book is at https://github.com/geerlingguy/ansible-for-devops, which has an issue for each of 15 episodes of his Ansible 101 series on YouTube. He has chapter markers into each video at his blog plus Q&A (written in Markdown).

Encrypted data within playbooks stored in GitHub can be unencrypted in memory using Ansible Vault.

In the templates folder are Ansible template files which specify values which resolve variables defined in other files, such as: ``.

Template files have the .j2 file extension because they are processed by the Jinga2 templating program that comes with the Ansible installer. Written in Python, Jinga2 is also by Django, Flask, and other Python frameworks.

Role files encapsulate instructions on how Ansible performs a discrete unit of work, such as building a webserver.

A role folder contains sub-folders with these names:

The main.yml in meta defines dependencies:

Tasks are shereable and repeatable.

Ansible inventory files lists hosts can be defined within:

Group names are defined within square brackets. Groups are referenced in playbooks.

Variables applicable to all items within a group can be defined. What’s wrong with the example?

To get the status of servers under [webservers] in the inventory file above:

In addition to this ad-hoc run, Ansible can be run based on the contents of Playbooks with a command such as:

Such inventory files are typically kept in a Git repository.

Inventory files can be dynamic, issued by a program that returns to STDOUT. Examples is Cobbler, LDAP, cloud such as AWSEC2, retrieving from CMDB, etc.

There are two arguments a dynamic inventory must respond to: –list and –host [hostname]

The –list argument must return a JSON-encoded hash or dictionary containing all groups that are part of the inventory. The groups must include all host and child group information.

Unlike Puppet, Ansible does not require agent software to be installed and thus potentially leave residual bits on servers.

Modules are the “brains” of Ansible.

Various modules running on remote hosts provide the plumbing for other networking protocols, such as HTTP, runing on remote machines.

Responses returned to the Ansible Control Server are in JSON messages.

Ansible Module development can be in any dynamic language, not just Python on the server.

To configure sudo access for Ansible on node1 and node2 such that Ansible may use sudo for any command with no password prompt.

New major releases of Ansible come out approximately every two months, with release cycles of about four months.

PROTIP: Ansible was written in Python 2.6+ and open-sourced within GitHub’s ansible organization. Thus, it can run natively on NIX (Linux/Unix/Mac), but Windows not currently supported nor recommended. However, run virtual instances on a Windows, Mac, or other native OS if you want to use them to run Ansible.

To build Ansible from source on GitHub:

--recursive is needed because the repo contains sub-repos.

The “ansible_python_interpreter” variable in inventory points to the Python executable folder.

To enable Python to talk with Windows WinRM:

To execute the script, run:

To capture the result or output of a task so that follow-on tasks can act accordingly:

NOTE: .j2 files are processed by Jinja2, the template engine for Python, which replace variables with data values in static files.

To set a register to put result in a variable, then if the debug sees that a previous task failed, it would send a message.

NOTE: Handlers don’t run until all playbook tasks have executed.

NOTE: A particular handler only executes once if needed.

NOTE: Handlers don’t run until all playbook tasks have executed.

Variables can be defined in different locations. Ansible looks for configuration variables in this sequence, and stops searching once it finds one.

Edit the file to make common changes, such as:

An example $ANSIBLE_CONFIG environment variable from the full list is:

This sets the maximum number of parallel operations allowed on an Ansible server, determined through performance and capacity testing.

Scalyr.com has a DaemonSet for Kubernetes monitoring.

Ansible achieves zero-downtime deployments with multi-tear rolling updates to each specific node in a cluster.

This specifies taking 5 machines at a time out of a cluster:

Videos of AnsibleFest going back to 2016 in London and 2017 San Francisco.

https://github.com/monfresh/laptop my personal playbooks and scripts to install a laptop from scratch including some dotfiles. Based on Fedora 27. Not idempotent.

The diagram is based on https://www.ansible.com/how-ansible-works: 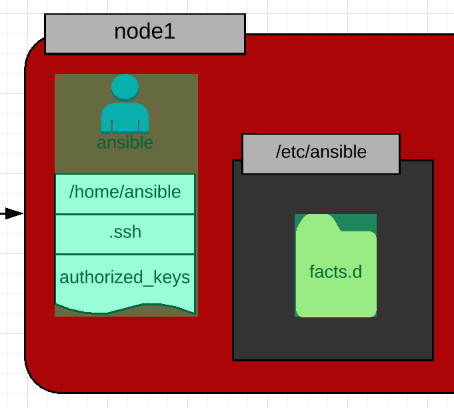