This is a step-by-step hands-on tutorial on using the Salesforce DX (Developer eXperience) for continuous testing and development of Salesforce modules.

Succinct and without hype. PROTIPs here present wisdom and knowledge from experience unique to this site. Unlike Trailhead’s instructions, this displays output from commands.

PROTIP: SFDX was announced in 2015 and entered Open Beta June 2017, available in all prod and business orgs.

Wade Wegner’s diagram and the table under it illustrate the shift being introduced by DX:

PROTIP: Various people have used different nicknames, so here they are together:

The table above is explained in the text below:

Salesforce began with its “clicks, not code” slogan because Salesforce has made it so apps can be customized mostly within the GUI rather than coding internal configurations. This enabled “citizen developers” to customize their apps without a Computer Science degree.

And Salesforce has had Activity tracking which tracks every change to user data in the database.

Traditionally, changes are introduced by creating “change sets” tested within sandboxes which duplicate the production org. This means the development workflow is focused on what’s in the org., with org instances nutured as dear pets. For example, after Person accounts are enabled, there is no going back.

However, throughout the software development industry today, there is a movement toward storing configuration as code, of keeping metadata out from inside data in the org and into versioned code bases separate from the data.

The new “source of truth” for source-driven development is in the VCS (Version Control System) rather than in the production org. This means the configuration of the org exists outside the org. So experimental orgs can be easily created and tested without fear of disruption.

This transition is necessary to provide more flexibility to developers. This new approach puts versioning at the center of the workflow so that the state of an org can be brought back to any point in the past (like a time machine).

Such an approach requires more use of command-line terminals. That’s why I (not Salesforce) call it “clicks AND code”. CLI can completely replace the ANT deployment tool and unmanaged packages.

Each repo is distributed, meaning each clone of a repo is a complete duplicate with all version history. This means an Org with all its metadata can be worked on simultaneously by different people, instead of having to tag-team time on a change-set, each developer can test on his/own scratch orgs based on what each developer has on his/her own laptop. Reduced need for coordination enables faster, continuous testing and deployment to occur.

The bottom line of all this is to reduce the “friction” that keep changes from occurring more quickly and frequently – continuously rather than occassionally.

HISTORY: Initially, Developer Edition Orgs cannot be enabled as a “Dev Hub”, when Dev Hub can only be enabled on environments that have active paying users, such as Production or Business Orgs. See Intro to Environments.

Now: “You can’t enable Dev Hub in a sandbox”. 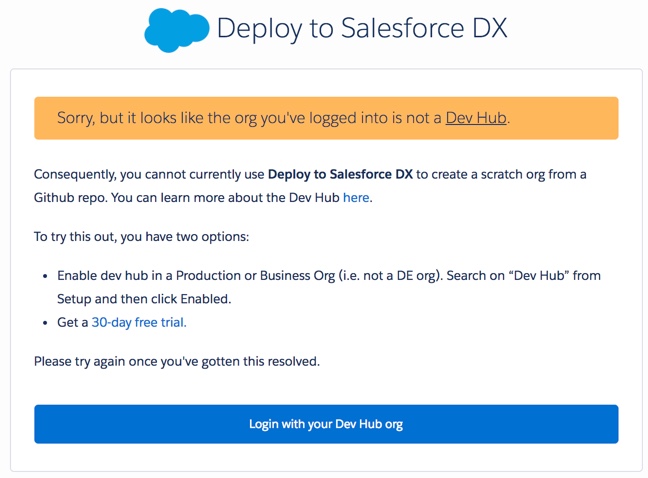 BLAH: What that means is previously unlimited FREE Developer accounts will be limited to 30 days when working with scratch Orgs (which require Dev Hub to activate).

DX consists of these new facilities:

(Number within parentheses are for Partner Developers.)

All sandboxes contain metadata (application and configuration information) which define reports, dashboards, price books, products, apps, and customizations in Setup. The data limit use of space for both metadata and customer data, consisting of standard and custom object records, documents, and attachments.

Partial Copy and Full Sandboxes are created based on specifications defined in a Sandbox template. It appears when searched in Setup only if you have permissions to view/edit them. An email is sent when a Sandbox finishes being populated.

A Full Sandbox (that is a nearly identical copy of all production data) is available only to Enterprise or Unlimited Edition customers. Sandboxes cost about 25% of total spend.

DX is enabled by the rapid and near ubiquitous adoption of Git to store text in an efficient way that enables every change to be tracked (in an audit trail), which also enables fall-back to complete versions at any time in the past (like a time machine).

Git is actually both a specification and a program name. The creators of the first Git program (which include the same person who created Linux) open sourced the internal format of their program Git, thus enabling many programs to offer Git capability. This has enabled the Git source version control (SVC) approach to be overwhelmingly popular.

By contrast, competing SVC approaches (such as Subversion) are more cumbersome and less flexible because they take a command-and-control mindset rather than a distributed work mindset.

A clone of a Git repo contains the entire depth of history for the project. Whereas Subversion cloning provides a portion of the total project. This means that, in Subversion, people have to wait for all dependencies to be ready before releasing the whole. The Subversion checkout command locks portions of code from being changed, a whole different concept.

With Salesforce DX, a local project is tied to a repository. Each project contains, at a minimum, one artifact. Each repository keeps a history of all work done for artifacts. Branches are used to track the changes for each release.

In more complex orgs, you may find it necessary to have multiple related artifacts developed as part of the same project. This happens when sets of components and customizations depend on others.

Install SFDX CLI on your laptop

The below is based on https://developer.salesforce.com/tools/sfdxcli

On your local machine (laptop), perform these steps to obtain assets from GitHub to create a scratch org:

Under /main/default/classes are the minimum needed. But Dreamhouse has the full set:

Inder the .sfdx top-level folder is a folder named “tools” that contains the apex.db (database definiton).

What’s in apex.db is defined within .sfdx/typings/lwc/apex/ – .ts (Typescript) files.

PROTIP: Metadata in existing orgs can be extracted into source code for storage in GitHub in sfdx-project.json files. This is easier said than done because there are several sources:

A special token is used in CI runs.

VIDEO: In 2018, documentation about metadata is disparate, it’s non consistent, not easy to find and navigate.” A Metadata Report generated from each org lists for each Metadata Type whether it’s exposed by the Metadata API, in source tracking, and unlocked packaging, all in one place.

These instructions are based on video:

The strategy is to, over time, to identify unpackaged metadata and organize them into Salesforce DX packages.

Salesforce ISV Technical Evangelists Vivek M. Chawla, Peter Martin, and Danny Chang talk in their this January, 2018 video going through this slidedeck to explain their end-to-end model for ISV application design and developer workflow using SFDX, GitHub, CircleCI, and First-Generation Packaging by applying https://github.com/sfdx-isv/sfdx-falcon-template and https://github.com/sfdx-isv/sfdx-falcon-demo app. Talk to them at sfdx-falcon-group for partners only.

Trailhead project: Get Set Up with GitHub and Travis Continuous Integration [+50 points in 40 mins] Use the Salesforce command-line interface to create, convert, and deploy apps.

https://trailhead.salesforce.com/trails/sfdx_get_started?trailmix_creator_id=00550000006FetYAAS&trailmix_id=salesforce-dx Get Started with Salesforce DX

The above replace many Workbooks

Keir Bowden: SalesforceDX — View from the Coal Face from Nov 19, 2016 talks about the new Force.com IDE being tightly integrated with the new CLI, combining the Heroku toolbelt with the Force CLI.

This is one of a series about Salesforce