This takes a deeper dive than The Pipeline tutorial, expanded for production use in an enterprise setting.

This adds more deep-dive details and specifics about Jenkinsfile Groovy coding in https://jenkins.io/2.0 and in videos ( Pipeline)

Chris Blackden’s 1.43 hr Building a Modern CI/CD Pipeline with Jenkins makes use of his Redis-based Dockerized sample app with yaml to run within AKS.

Clicking this creates a structure:

The basic ways to obtain (and change) Groovy code for Pipleline type jobs:

This is the most typical approach in enterprise settings.

The analysis of the Console Log from running the sample Groovy script consists of these topics:

#!/usr/bin/env groovy is nickamed the “shebang” to announce that the file is in Groovy-language formatting. PROTIP: This is not needed for in-line scripts, but there in case in case this is copied to a Jenkinsfile.

\** with two asterisk is the code for code scanners which extract metadata from comments in all related files to come up with an analysis of the codebase.

stage commands are used to separate timings reported in the log.

\u2600 is Unicode for a “star” icon to make frequently referenced information faster to find.

Notice that unlike Java code, there are no semicolons.

Code between the braces ({ and }) is the body of the node step.

We will be going to alter this code in the next section.

This improves quality by making use of code review features in GitHub.

Having infrastructure specifications in the same repository ensures that changes are automatically reflected.

Here we want go beyond basic scripts and look at scripts used in production (productive) use, which are more complicated/complex than almost all the tutorials on the internet:

Lessons from these are provided below.

The top set of lines in Jenkinsfile Groovy scripts need to be import statements, if any, to pull in libraries containing functions and methods referenced in the script. Examples:

Hudson is the previous name of Jenkins before it forked.

The official documentation page for the Apache Groovy language is
http://www.groovy-lang.org/documentation.html#gettingstarted

Groovy was used to build Gradle because it can handle larger projects than Maven, which Gradle replaces.

This diagram from Jenkins.io illustrates the flow of work.

NOTE: Groovy is a derivative of Java, so it has Java’s capability to catch (handle) execution exceptions not anticipated by the programming code.

This sample catch block sends out an email:

To add text to actual build page, you can use Groovy Postbuild plugin to execute a groovy script in the Jenkins JVM to checs some conditions and changes accordingly the build result, puts badges next to the build in the build history and/or displays information on the build summary page.

TODO: Verify the above works.

Use the withEnv step to set a variable within a temporary scope:

Here is an example of doing a Bash shell call to invok git commands on the Git client on Jenkins agent machines. This sends STDOUT output to a file (in workspace) named “GIT_COMMIT”:

The git rev-parse command is a internal Git utility to parse (pick out) revision/object names from a Git repo. This is done after Git has done a checkout to establish the branch and specific commit because the output is a SHA1 hash of the HEAD such as “2b9a2833bc3c6bc8e7b7344e8178ce98e29ebe4b”.

But not to a Pipeline job. Thus the need for shell commands.

git_commit.take(6) extracts the first six characters to create a short SHA, much like what Git does because a smaller number of characters are enough to uniquely identify a specific commit.

Here is an example of a Groovy script file “access-repo-information.groovy”.

Like other Groovy files, it has in the first line #!groovy.

tokenize extracts out text between the slash character specified into an array named “tokens”. It is a Groovy String method. 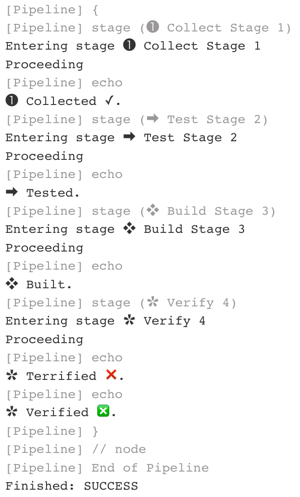 PROTIP: Putting the same visual mark in both the stage name and echos related to the stage makes them visually easier to identify together.

Here is an example of adding color in a stage name:

Here is an example of invoking a build wrapper that adds a time stamp to echo output to the console log :

In single-branch contexts, one can download a specific repo from GitHub into Jenkins’s local workspace:

CAUTION: The “.git” at the end is necessary in the URL and the repo needs to contain a Jenkinsfile (no file extension).

An example using it:

While freestyle projects can use the Multiple SCMs plugin to check out more than one repository, or specify multiple locations in SCM plugins that support that (notably the Git plugin), this support is quite limited.

To work with NodeJS.

Here an example of pushing changes to Git from inside Pipeline.

This approach requires the repository to be setup in Jenkins to be authenticated to the repo (GitHub) using username and password rather than other methods.

A open JIRA requests getting the GitPublisher Jenkins functionality working with Pipeline.

This script uses the Git stash command to move text among Jenkins nodes.

This says the name of the node is node('!master'), any node except the master is selected.

This video introduces this feature.

A pipline Groovy file can be loaded from any repo within a pipeline, like what “include” statements do.

This shows how to “include” a file instead of duplicating code.

This shows how to “include” a file instead of duplicating code.

In this example, the “org-name”, “repo-name” are replaced with actuals.

The “GITHUB_TOKEN” is a variable so its value is not exposed in code.

Git Hooks are programs placed in a hooks directory to trigger actions at certain points in git’s execution. The list of hooks at:
https://www.kernel.org/pub/software/scm/git/docs/githooks.html
include pre-commit, post-commit, etc.

Hooks that don’t have the executable bit set are ignored.

Organization folders enable Jenkins to automatically detect and include as resources any new repository under an account/organization.

Alternately, if you want to run a Maven file:

CAUTION: Watch for “Error while checking in file to scm repository”.

Here is an example of how to run several jobs in parallel. Define array “branches” for execution by in a “parallel” command which executes all items in the array at the same time.

param1 : an example string parameter for the triggered job.

Remember it’s not permitted to have a stage step inside a parallel block.

Here is an alternative.

Instead of Jenkins types Freestyle and Pipeline, select Multi-branch.

In this video Jesse

For long-running build runs at
https://wiki.jenkins-ci.org/display/JENKINS/Durable+Task+Plugin

“Library offering an extension point for processes which can run outside of Jenkins yet be monitored.”

Some install the SafeRestart plug-in which adds the Restart Safely option to the Jenkins left menu to avoid needing to be at the server console at all.

BTW, @jenx_monitor is a A Jenkins build server monitor for Mac OS X, powered by MacRuby. This app sits in your status bar and reports the status of all your Jenkins builds.

Chaining in the Pipeline

Jenkins v1 consisted of many atomic jobs chained together by a mix of triggers and parameters.

Continuous Integration (CI) merges development work in a developer’s branch with the team’s common code to ensure that changes still work in a testing environment. It’s call continuous to emphasize small changes being integrated frequently to stay in sync with an evolving team codebase. This requires individual changes to be scoped for completion in a short amount of time (hours at most).

Continuous Delivery (CD) delivers code for running in an UAT or Staging environment (of full production scale) used by end-users (QA or customers) to process business transactions in inspection mode. It’s called continuous for frequency to find more issues early, before each particular version has left the memory of developers.

Continuous Deployment moves code to Production. This is done by merging to the Mainline/Master branch which gets copied to the Production environment. It’s called continuous to make this happen as soon as code is ready.

BTW, Assembla has more ideas about this.

This script imports Goovy’s built-in library to output Json using the “JsonOutput.toJson” class.method. The JSON output is the body (payload) of a REST API call to Slack.com made using the Linux curl command:

This snippet for just the “notify” stage shows how to invoke a Bash shell command (“sh”) to use the “nc” (netcat) command (on the last line below).

The shell command above first defines environment variables, then between (parentheses) specifies the commands piped into the nc command.

The “nc” (netcat) command is built into most Linux servers (including Mac OSX). It’s used instead of Telnet here.

A “raw” connection is established on default port 6667. Your enterprise network may not allow it.

You need to modify the “This is the message here” text to a variable updated internally in the script based on results of the previous stage.

$MYPASSWORD comes from outside the script.

For Groovy code, CodeNarc (similar to PMD for Java) checks for potential defects, poor coding practices and styles, overly complex code, and so on.

SonarQube runs on its own server a set of Maven code quality related plugins against your Maven project, and stores results into its relational database

.gdsl file for IntelliJ IDE code completion begins like this:

This video introduces Continuation Passing Style of “functional programming”, which means that, unlike the direct style people have been coding, CPS functions return a function rather than values.

The switch to “functional programming” is actually a natural progression many others are undergoing in 2016. The Jenkins development team has, over the years, adopted innovations in Java such as Spring, Guava, and Groovy, as evidenced by this from slide 9 of the Intro presentation at ParisJUG 7 June 2016 by Arnaud Heritier (@aheritier) of Cloudbees.

Running in parallel is especially useful for testing multi-platform apps.

http://…/pipeline-syntax/ has a snippet generator

If you prefer videos, these are specifically about Jenkins 2.0+

Robert “Bobby” Sandell (<a target=”_blank” href=”rsandell.com), Software Engineer at Cloudbees Stockholm since June 2010 has these videos:

Before “Pipeline” there was “Workflow”, these resources:

@jenkinsconf is the handle for Jenkins World, Sep 13-15 in Santa Clara, CA