This tutorial is a step-by-step hands-on deep yet succinct introduction to using Hashicorp’s Terraform to build, change, and version clusters of immutable servers (through load balancers) running in clouds using declarative statements that are idempotent.

Terrafrom provides its own modules. But where Terraform comes up short, customer administrators can write modules of their own to add more logic to continue using declarative specifications (templates). Thus Terraform defines the “desired state configuration” (DSC).

Terraform is better characterized as a multi-service tool. Terraform is not a “multi-cloud tool” to ease migration among clouds to avoid vendor lock-in. One would need to rewrite all templates to move from, say, AWS to Azure. Terraform doesn’t abstract resources needed to do that.

Can’t really do that with CFN alone. Even though Cloud Formation has nested stack only for AWS.

The objective is to save money by automating the configuration of servers and other resources, which is quicker and more consistent than manually clicking through the GUI.

The difference between Chef, Puppet, Ansible, SaltStack, AWS CloudFormation, and Terraform, based on analysis:

*1 - CF (CloudFormation) is used only within the AWS cloud while others operate on all clouds. CF is the only closed-sourced solution on this list.

Terraform installs infrastructure in cloud and VM as workflows. Kubernetes orchestrates (brings up and down) Docker containers.

Terraform and Ansible can work in unison and complement each other. Terraform can bootstrap the underlying cloud infrastructure and then Ansible provisions the user space. To test a service on a dedicated server, skip using Terraform and run the Ansible playbook on that machine. Derek Morgan has a “Deploy to AWS with Ansible and Terraform” video class at LinuxAcademy which shows how to do just that, with code and diagram.

WARNING: Terraform does not support rollbacks. “Immutable” means once instantiated, it doesn’t change. In DevOps, this strategy means individual servers are treated like “cattle” (removed from the herd) and not as “pets” (courageously kept alive as long as possible).

Immutable and idempotent means “when I make a mistake in a complicated setup, I can get going again quickly and easily with less troubleshooting because I can just re-run the script.”

A key differentiator of Terraform is its plan command, which provides more than just a “dry-run” before configurations are applied for real. Under the covers, Terraform plan generates an executable, and uses it to apply, which guarantees that what appeared in plan is the same as with apply.

First of all, if you ever want to get AWS certified, you’re going to need to know Cloud Formation. For a company, it comes down to vendor support preferred, which is needed considering that the product has been available only a few years.

Some have found Cloud Formation’s references and interpolation to be difficult. Troposphere and Sceptre makes CFN easier to write with basic loops and logic that CFN lacks. But in Sep 2018 CloudFormation got macros to do iteration and interpolation (find-and-replace). Caveat: it requires dependencies to be setup.

CFN limits the size of objects uploaded to S3.

AWS Cloud Formation and Terraform can both be used at the same time. Terraform is often used to handle security groups, IAM resources, VPCs, Subnets, and policy documents; while CFN is used for actual infrastructural components, now that cloud formation has released drift detection.

NOTE: “Combined with cfn-init and family, CloudFormation supports different forms of deployment patterns that is much more awkward to do in Terraform. ASGs with different replacement policies, automatic rollbacks based upon Cloudwatch alarms, and so forth are all well documented and work pretty straight forward in CloudFormation due to the state being managed purely internal to AWS. Terraform is not really an application level deployment tool and you wind up rolling your own. Working out an odd mix of null resources and shell commands to deploy an application while trying to roll back is not straightforward and seems like a lot of reinventing the wheel.”

Code for Terraform is open-sourced at
https://github.com/hashicorp/terraform

Although Terraform is “open source”, the Terraform GUI requires a license.

PROTIP: Terraform is written in the Go language, so (unlike Java) there is no separate VM to download.

To manually install on Ubuntu:

Instructions below are for the Command Line.

If you prefer using Python, there is a Python module to provide a wrapper of terraform command line tool at https://github.com/beelit94/python-terraform

Modules are where the “smarts” are to manage each DevOps component:

Blogs and tutorials on modules:

A popular replacement of some standard terraform commands are terragrunt commands open-sourced at https://github.com/gruntwork-io/terragrunt by Gruntwork:

These wrapper commands provide a quick way to fill in gaps in Terraform - providing extra tools for working with multiple Terraform modules, managing remote state, and keeping DRY (Don’t Repeat Yourself), so that you only have to define it once, no matter how many environments you have.

WARNING: There are some concerns about Terragrunt’s use of invalid data structures. See https://github.com/gruntwork-io/terragrunt/issues/466

Since the point of Terraform is to get you into clouds, Terraform looks for specific environment variables containing AWS credentials.

Gruntwork.io offers (for $4,950), access to their 250,000-line Reference Architecture of starter code to create a production-worthy “defense in depth” setup on AWS: 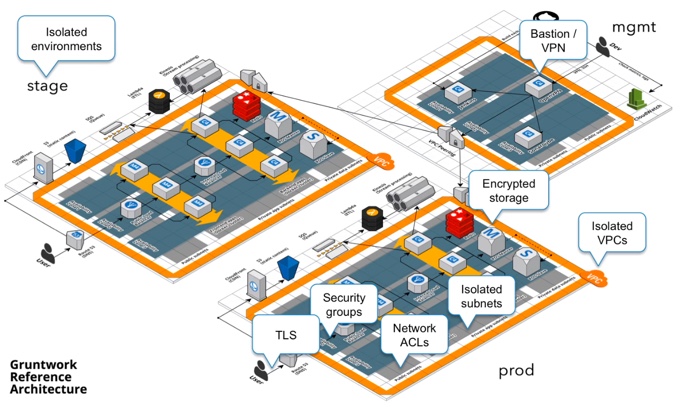 An additional $500 a month gets you access to their Reference Architecture Walktrough video class. But previews of the class is free:

For those without the big bucks, Yevegeniy (Jim) Brikman (ybrikman.com, co-founder of DevOps as a Service Gruntwork.io) has generously shared:

The sample scripts referenced by this tutorial contain moustache variable mark-up so that you can generate a set for your organization.

Terraform defined HCL (Hashicorp Configuration Language) for both human and machine consumption. HCL is defined at https://github.com/hashicorp/hcl and described at https://www.terraform.io/docs/configuration/syntax.html.

The minimal HCL specifies the provider cloud, instance type used to house the AMI, which is specific to a region:

Each block defined between curly braces is called a “stanza”.

”${var…}” references values defined in file “variables.tf”, which provide the “Enter a value:” prompt when needed:

Values are defined in the terraform.tfvars file.

HCL is less verbose than JSON and more concise than YML. *

\ back-slashes specify continuation of long lines (as in Bash).

Values can be interpolated using syntax wrapped in ${}, called interpolation syntax, in the format of ${type.name.attribute}. For example, $\{aws.instance.base.id\} is interpolated to something like i-28978a2. Literal $ are coded by doubling up $$.

More importantly, tf files are declarative, meaning that they define the desired end-state (outcomes). If 15 servers are declared, Terraform automatically adds or removes servers to end up with 15 servers rather than specifying procedures to add 5 servers.

Terraform can do that because Terraform knows how many servers it has setup already.

HCL does not contain conditional if/else logic, which is why modules (described below) are necessary.

HCL2 is the new experimental version that combines the interpolation language HIL to produce a single configuration language that supports arbitrary expressions. It’s not backward compatible, with no direct migration path.

Terraform processes all .tf files in the directory invoked, in alphabetical order.

The above minimal HCL can be in a file named ec2.tf.

PROTIP: Including in tf files AWS credentials such as these might inadvantly made visible to the public by getting checked into a public repository:

If you simply leave out AWS credentials, Terraform will automatically search for saved API credentials (for example, in ~/.aws/credentials) or IAM instance profile credentials.

An important distinction between Cloud Formmation and Terraform is that Terraform users track the state of each resource.

In a team environment, it helps to store state state files off a local disk and in a “backend” location central to all.

The steps below are based on https://www.terraform.io/intro/examples and implemented in the setup scripts at: https://github.com/wilsonmar/mac-setup which performs the following steps for you:

When a resource is initially created, provisioners can be executed to initialize that resource.

Provisioner definitions define the properties of each resource, such as initialization commands. For example, this installs an nginx web server and displays a minimal HTML page:

In this example terraform.tfvars file are credentials for both AWS EC2 and Azure ARM providers:

The private_key_path should be a full path, containing \\ so that the single slash is not interpreted as a special character.

bucket_name must be globally unique within all of the AWS provider customers.

PROTIP: Install from https://github.com/dtan4/terraforming a Ruby script that enables a command such as:

You can pass profile name by –profile option.

Terraform expect plugins to follow a very specific naming convention of terraform-TYPE-NAME. For example, terraform-provider-aws, which tells Terraform that the plugin is a provider that can be referenced as “aws”.

PROTIP: Establish a standard for where plugins are located:

PROTIP: When writing your own terraform plugin, create a new Go project in GitHub, then locally use a directory structure:

where USERNAME is your GitHub username and NAME is the name of the plugin you’re developing. This structure is what Go expects and simplifies things down the road.

A Terraform module is a container for multiple resources that are used together.

The module’s source can be on a local disk:

The source can be from a GitHub repo such as https://github.com/objectpartners/tf-modules

https://registry.terraform.io provides a marketplace of modules. The module to create Hashicorp’s own Vault and Consul on AWS EC2, Azure, GCP. Video of demo by Yevgeniy Brikman:

The above is created by making use of https://github.com/hashicorp/terraform-aws-vault stored as sub-folder hashicorp/vault/aws

It’s got 33 resources. The sub-modules are:

Here are people who have taken time to create tutorials for us:

Derek Morgan in May 2018 released video courses on LinuxAcademy.com:

Seth Vargo, Director of Evangelism at HashiCorp, gave a deep-dive hands-on introduction to Terraform at the O’Reilly conference on June 20-23, 2016. If you have a SafaribooksOnline subscription, see the videos: Part 1 [48:17], Part 2 [37:53]

Saurav Sharma created a YouTube Playlist that references code at https://github.com/Cloud-Yeti/aws-labs as starters for website of videos and on Udemy.

zero-downtime deployment, are hard to express in purely declarative terms.

Kyle Rockman (@Rocktavious, author of Jenkins Pipelines and github.com/rocktavious) presented at HashiConf17 (slides) a self-service app to use Terraform (powered by React+Redux using Jinga2 to Gunicorn + Djanjo back end running HA in AWS) that he hopes to open-source at github.com/underarmour

AWS CloudFormation Master Class by Stéphane Maarek from Packt May 2018

Some CloudFormation templates are compatible with OpenStack Heat templates.

Terraform Basics mini-course on YouTube in 5-parts from “tutorialLinux”.

http://chevalpartners.com/devops-infrastructure-as-code-on-azure-platform-with-hashicorp-terraform-part-1/ quotes https://www.hashicorp.com/blog/azure-resource-manager-support-for-packer-and-terraform from 2016 about support for Azure Resource Manager