Which cloud is best? Azure vs. AWS vs. Google 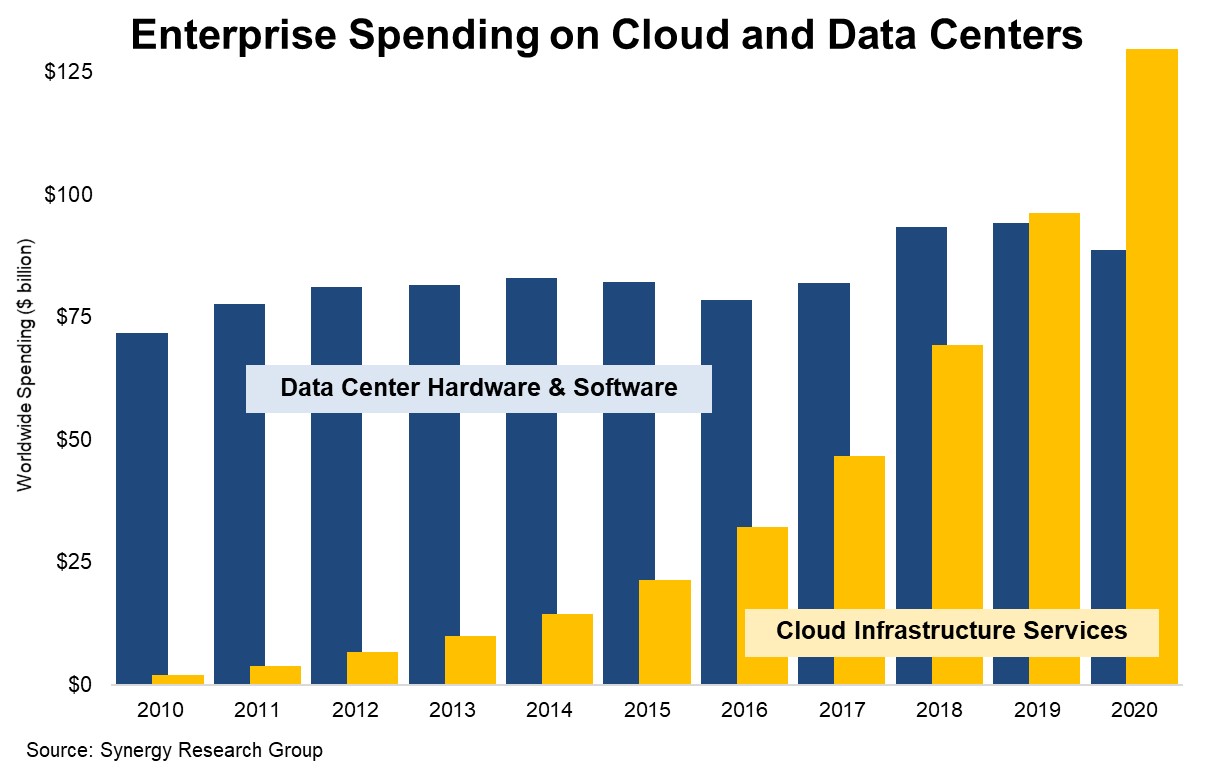 A larger research firm, Gartner, reports the cross-over to occur in 2024: 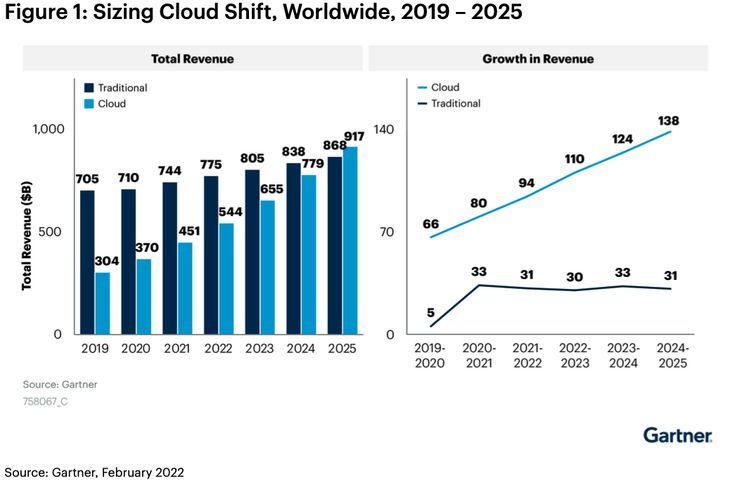 What is Cloud Computing?

Why? Advantages of Cloud

Evaluations can be based on the advantages of cloud:

PROTIP: Memorize the above list for exams and interviews.

Amazon’s “Well Architected” notes the constraints removed by being in the cloud:

Microsoft calls “Landing Zones” the output of a multisubscription Azure environment that accounts for scale, security, governance, networking, and identity. Azure Landing Zones enable application migrationa and greenfield development at enterprise-scale in Azure. These zones consider all platform resources required to support the customer’s application portfolio and don’t differentiate between infrastructure as a service or platform as a service.

Cloud “as a Service” (*aaS) models

There are different ways to make use of cloud infrastructure:

An IDC July 2020 study identified these “trigger events” most important in leading the organization to use cloud services:

What to do with legacy systems

The different strategies to migration:

Despite all the good reasons, individuals used to the old way may still “drag their heels”. See my posts about Change Management.

Individuals must pick a single cloud?

Organizations are going multi-cloud by using software from HashiCorp, Snowflake for database, etc.

But an individual has a limited amount of time to keep up with changes. So many individual technologists need to select the cloud vendor which provides the best career prospects. Here’s my logic: 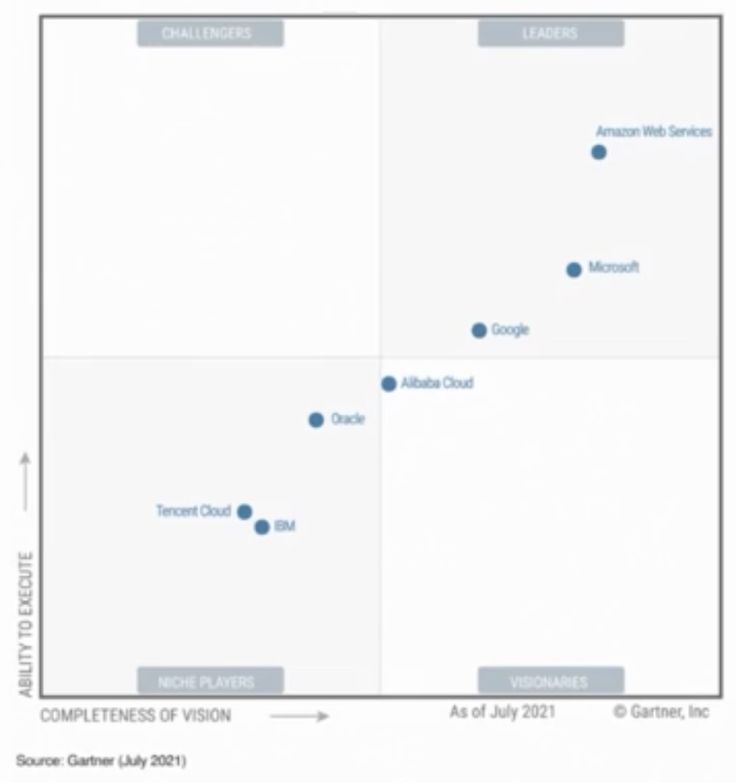 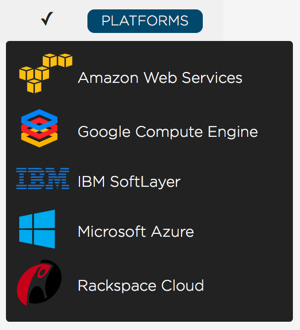 VIDEO: The Myth of Multi-cloud by Corey Quinn

Software for private clouds include Red Hat OpenStack and VMWare.

Software for hybrid private/public clouds include CloudFoundry, HashiCorp Terraform, and others. NetApp, or EMC

EDITOR’s NOTE: This is not a complete treatment. Additional information will be added over time.

PROTIP: Moving up to double the RAM or cores usually does not yield a doubling of capacity due to overhead and limits in shared components such as networking.

ARM processors run faster and cooler than Intel x86 processors. AWS Graviton Nitro EC2 instances. Until June 30th 2021, all new and existing AWS customers can try the t4g.micro instances free for up to 750 hours per month.

Even though cloud vendors provide a great deal of transparency to how they price their services, there are so many variables to what affects the final bill that the only accurate way is to actually run services.

Cowan analysis May 2016 (using 1.0 as average among vendors) rated Amazon 1.37 (above avarge) in prices (most expensive). Microsoft was rated the leader in price and APIs, but the lowest in support.

QUESTION: Is the comparison based on spot instances in AWS, which are of low cost because they can be taken away at any moment by someone who outbids. 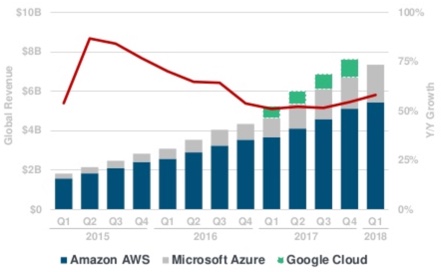 At the end of 2018, corporate filings reavealed this:

As of May 2016, Microsoft Azure works with SUSE and Oracle Java, but NOT Red Hat/IBM Enterprise Linux (RHEL).

Amazon provides software to host whatever OS is put into images. But its free server images are based on CentOS, derived from Red Hat as both use the yum package manager. Amazon is working on “Linux2” based on Red Hat.

Under ideal conditions, latency over networks are limited by speed of light traveling within fiber-optic cables, which is roughly 202562 km/s or or 125866 miles/s. (Actual reachable speed is still a bit lower than that).

To estimate distance between terrestial locations, use Distance Calculator website

TUTORIAL: Qwiklabs Network Performance Testing tutorial provides step-by-step instructions for obtaining timings between regions. It sets up one network with five subnetworks in different regions and a VM in each subnetwork. Utilities ping, iperf.

Google has laid its own fiber-optic wires around the world: 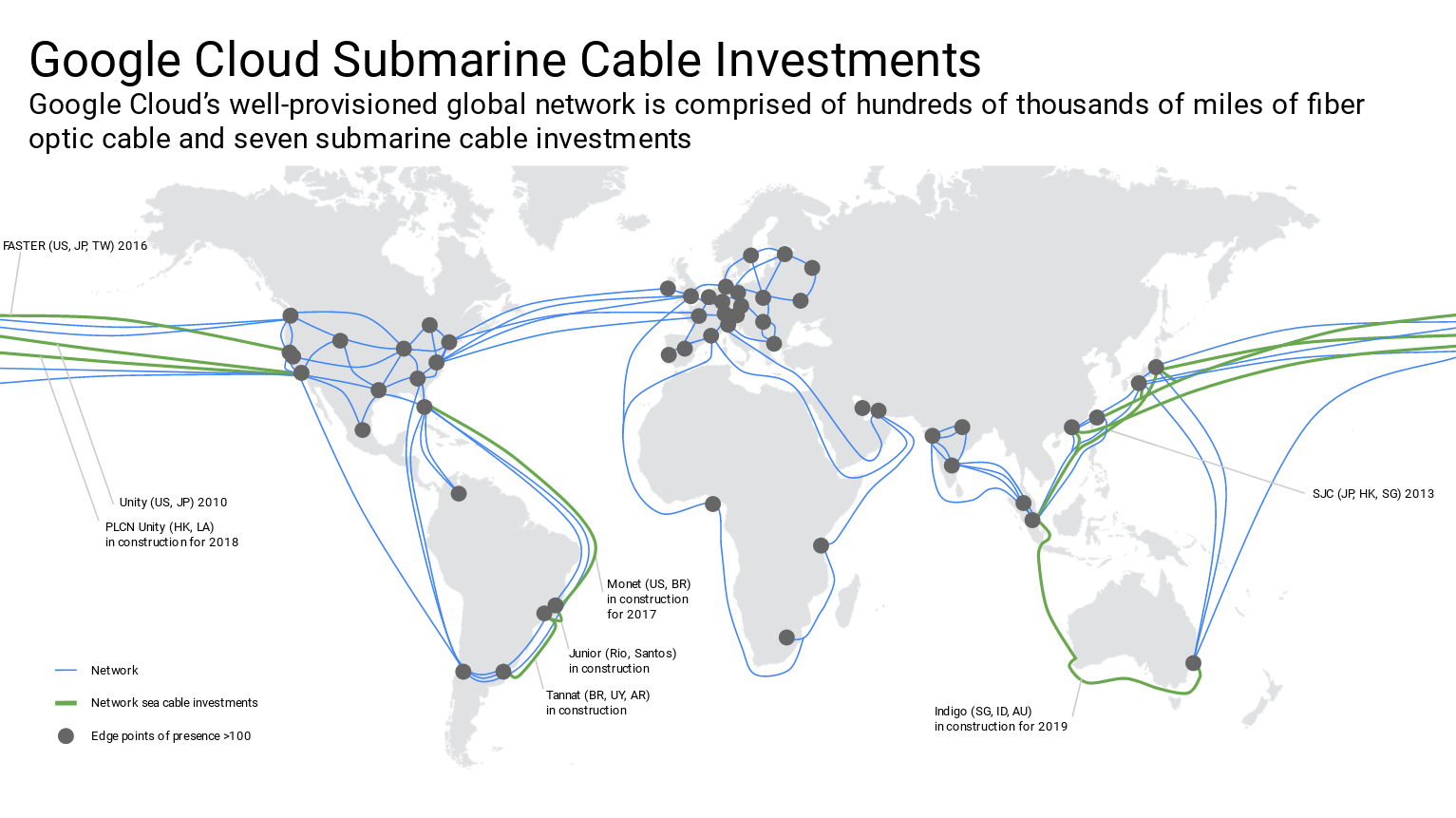 Still, as of this writing, latency between Google’s EU and Asia locations is very high (slow) because Google Compute Engine does not have a direct link between them.

PROTIP: If you only operate out of just one region in the world, use a Central US region, which reaches West to Asia and East to Europe.

To stop collection, press the dot with the arrow.

Amazon makes users specify the region to use. However, since Amazon usually makes new services first avilable on its us-east-1 (Virginia) region, that data center is most prone to overloading and thus down-time.

Amazon’s own EC2 Reachability Test does not provide ping speeds to specific IP addresses within each availability zone within each region, but a green icon when it can be currently reached at any speed. 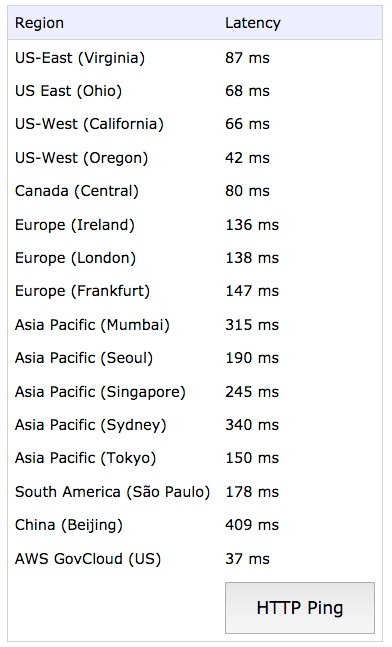 https://ping.varunagw.com/aws.htm provides green, yellow, red colors with Mean, Median, Min, and Max statistics based several measures of the speed to each EC2 region.

At time of writing, Microsoft has over 60 regions around the world on their map: 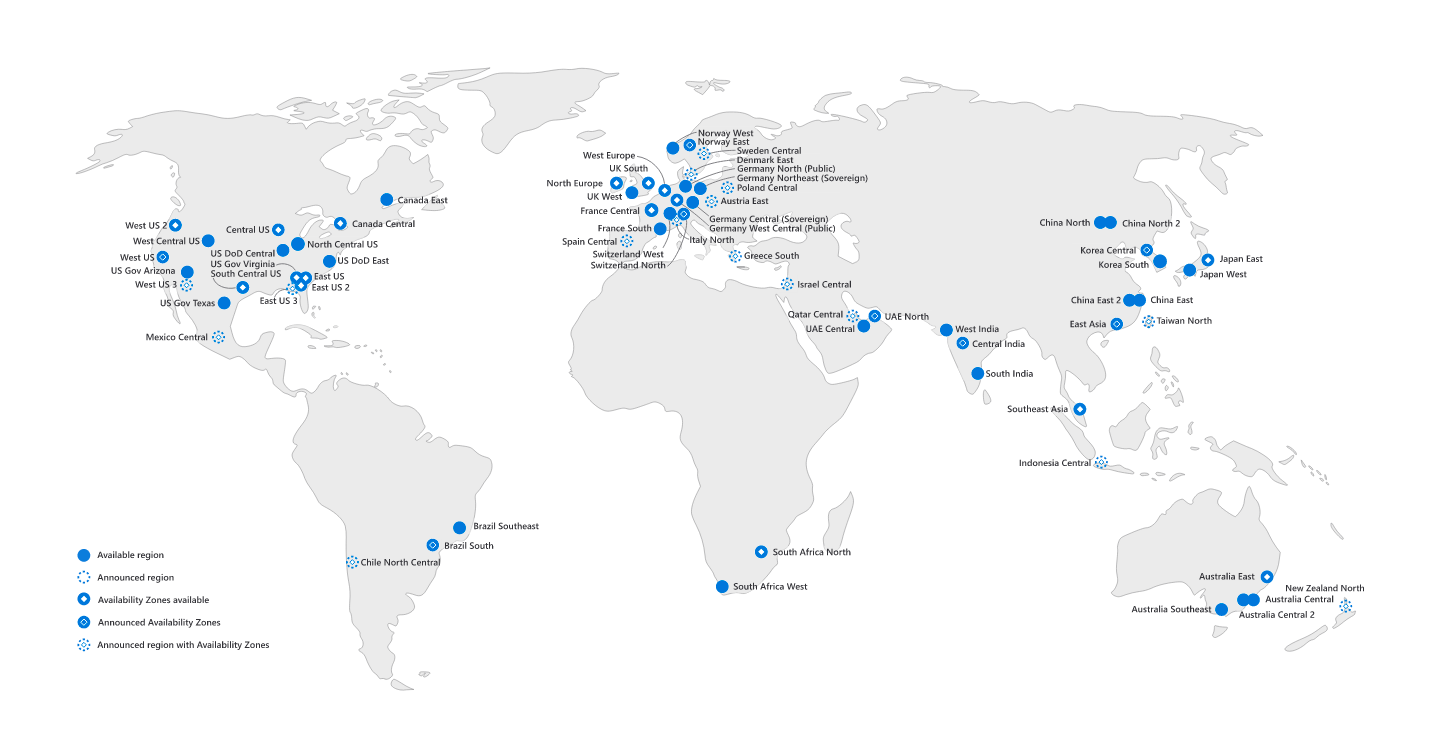 There is also an interactive map showing a point for each region’s Longitude and Latitude with city name.

https://docs.microsoft.com/en-us/azure/networking/azure-network-latency displays Microsoft’s own analysis of ping speeds between its regions (using data from the thousandeyes.com network analytics company): 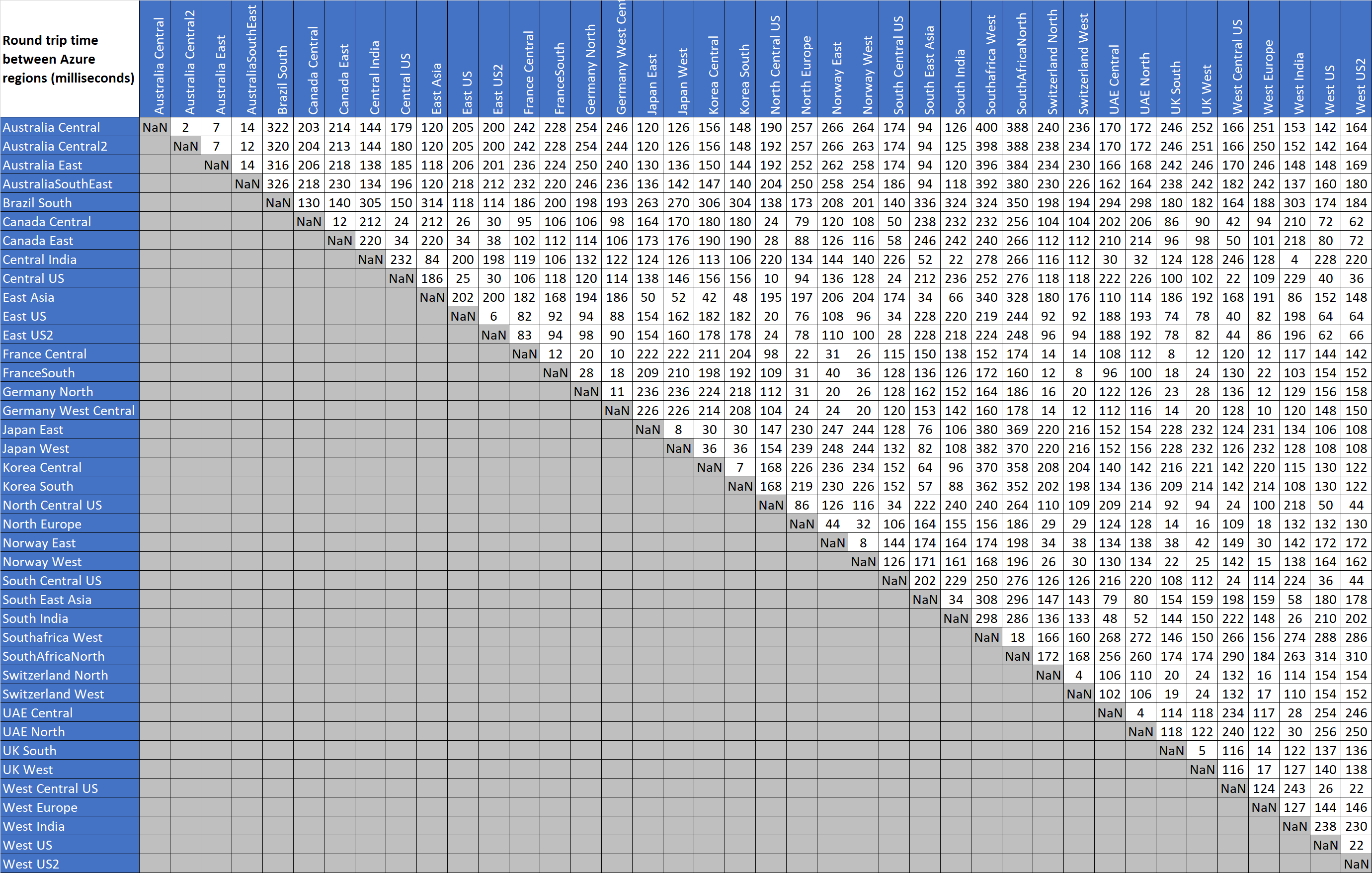 https://status.aws.amazon.com is Amazon’s AWS Service Health Dashboard applicable to all users. Under the tab for each continent is a list of each service plus region combination.

PROTIP: Most new services begin in the N. Virginia region “US-EAST-1”, as do the most famous outages. So if you are running a production load, try to use a different region than that. Nevertheless, that’s where one must provision AWS Cloud Front CDN for worldwide distribution.

https://phd.aws.amazon.com is your Personal Health Dashboard for your account.

https://istheservicedown.com/problems/amazon-web-services-aws/history is a private-party site reporting the history of downtimes on AWS. For example:

Here are the names of brand names, some with links to marketing or documentation pages:

Azure MDC (Mobile Data Center) makes use of “Azure Stack” software that runs Azure on-prem. in shipping containers, each with its own power and cooling hardware.

Your business is transitioning from an entirely on-premise IT environment to one hosted entirely in the public cloud. All physical servers and resources within your on-premise space will be replaced with virtual cloud resources hosted at offsite locations, on hardware that is managed by the cloud provider.

You are forecasting your IT resource costs for required compute, networking, and storage, and how expenses will change as a result of your cloud migration.

Which statement describes how your capital expenditures and operational expenditures for IT resources will change by migrating entirely to the public cloud?

A Your capital expenditure costs for IT resources will increase, while your operational expenditures will not change.

C Your operational expenditure costs for IT resources will increase, while your capital expenditures will not change.

https://statistica.com has statistics on AWS: 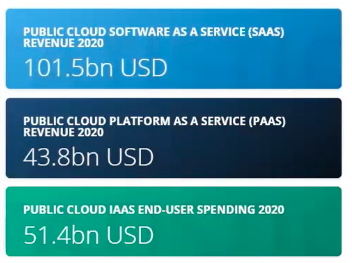 This is one of a series on cloud computing: