“SMACK refers to this set of open-source software:

Mesos to Marathon to DC/OS

Initially written as a research project at Berkeley, the Mesos Apache project runs both containerized and non-containerized workloads in a distributed manner.

Mesos was adopted by Twitter as an answer to Google’s Borg (Kubernetes’ predecessor).

“Mesosphere is democratizing the modern infrastructure we used at Twitter, AirBnB, and other webscale companies to quickly deliver data-driven services on any datacenter or cloud.” -Florian Leibert, Co-Founder & CEO

Mesosphere as an organization aims to make container orchestration less complex to use by regular human beings by supplying the Marathon “plugin” to Mesos to handle container scheduling.

Now Mesos became synonomous with DC/OS when, in mid-2016, Mesosphere introduced DC/OS (Distributed Cloud Operating System, aka Data Center Operating System) to simplify Mesos to the point where a Mesos cluster can be deployed with the Marathon scheduler in a few minutes.

[Mesosphere DC/OS reduces AWS bills by dynamically automating where services run on hardware across the datacenter. Higher utilization is achieved by DC/OS pooling unused capacity and moving apps to them. It goes beyond what VMware does, load balancing across several clouds and on-premises as a single set of resources to allocate as needed. That enables the handling of a massive amount of data and processing.

The ability to scale up and out impacts availability. 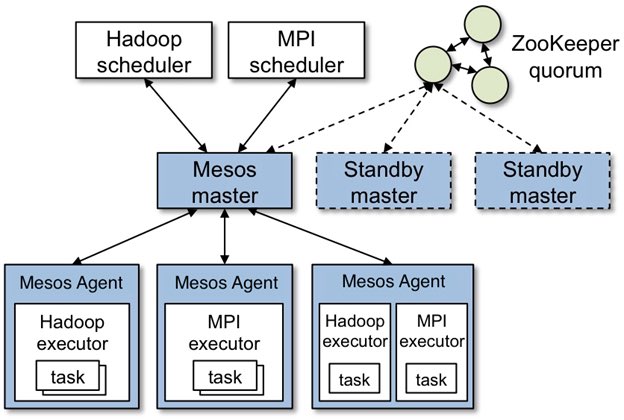 K8S nodes are anologous to Mesos’ agents. But Mesos adds a scheduler layer that doesn’t exist in K8S. Although Hadoop (big data) and MPI (messaging) schedulers are shown above, dozens of schedulers are available, including the Marathon container scheduler and Jenkins.

Services packages are added in a couple clicks at the DC Universe app store. Alternately, use command line:

You can create your own scheduler.

Akka supports multiple programming models for concurrency, but it emphasizes actor-based concurrency, with inspiration from Erlang. It’s from Lightbend.

As its name suggests, DC/OS is more than a container orchestration framework like Kubernetes.

In fact, Kubernetes can run on top of DC/OS and schedule containers with it instead of using Marathon.

But DC/OS is “less opinionated”. It can run non-containerized, stateful workloads.

Marathon’s APIs are more straightforward in comparison to Kubernetes. Marathon aggregates APIs and provides a relatively small amount of API resources, while Kubernetes provides a larger variety of resources and is based on label selectors.

Kubernetes has almost 10x the commits and GitHub stars as Marathon.

While Kubernetes is a completely open source, DC/OS is controlled by a commercial company, comes with a “Premium” subscription for extra features, So “seemingly simple features needed to automate the deployment process is only included in the enterprise version.” *

Florian Troßbach in his 2016 blog describes this sequence of installation:

If you want to try the examples yourself, you’ll need the following:

Many of the people are associated with both accounts.

https://github.com/dcos/dcos-launch Turn-key deployments of DC/OS on AWS (template and onprem), Azure, and GCE by Charles Provencher

https://github.com/alejandroEsc/kraken Deploy a Kubernetes cluster using Terraform and Ansible on top of CoreOS.

Mesos has its minimesos tool for testing and development. It is specially designed for continuous integration, and for deployment, you simply need to run the following command line on a machine with Docker installed:

Mesos is, as of this writing, available natively along with Azure Container Service. See https://azuremarketplace.microsoft.com/en-us/marketplace/apps/mesosphere.dcos?tab=Overview

Installation on AWS & GCP is manual.

One of the selling points of Mesos is that monitoring configuration is included.

To enable monitoring takes 3-20% of CPU:

A Mesos Master which knows about available computing resources makes offers to a Scheduler. The Scheduler accepts or declines offers. Accepted offers are sent to applicable Resources to launch executors/tasks.

There is also a MesosCon Europe and Asia.