JMeter in the cloud for distributed performance testing

Impose load remotely from Docker instances in the AWS cloud

The diagram here describes progress toward distributing runs of JMeter within EC2 and/or Docker, and scaling those instances to increase load on app servers. Each step is a deliverable within the sequence of MVP (Minimim Viable Product) stages.

The components necessary for performance/capacity emulating scripting and test runs are:

a. The application under test. I’ve used Dave Hoeffer’s the-internet because it is intended as a set of JavaScript challenges for scripting user emulation scripts. There are other sample apps.

b. App hosting environment. Dave Hoeffer has graciously created an instance on Heroku for single-user runs during scripting. But for load/capacity tests, we need to create a stand-alone app instance within a cloud. “the-internet” has a Docker image to run multiple users.

c. Emulator program (such as JMeter) to control 1 or a lot of emulated client instances running emulation scripts at the same time.

d. The Emulator hosting environment needs to be separate from the app environment under load. SaaS services (Blazemeter, StormRunner, Flood.io, etc.) can provide this environment. With more work, A Docker image from DockHub can be pulled locally or in a public cloud instance created using AWS CDK, Terraform, etc.

e. CI/CD workflow engine builds the app under test and test for security, functionality, capacity capability, etc. A Docker image of the free/open-source Jenkins can be used locally or in a public cloud. SaaS services (Harness.io, CircleCI, GitHub Actions, etc.) can provide this as well.

A. If your app under test can be reached from the public internet (such as “the-internet” running on Dave’s own Heroku instance), you don’t need to install an emulator (such as JMeter) on your laptop if you use Blazemeter SaaS, which provides a quick and easy way to begin. But please don’t run more than one user at a time.

Blazemeter runs JMeter scripts you upload from your laptop.

B. To run multiple users at a time, pull both “the-internet” app and emulator (JMeter) images from DockerHub and run them in your own cloud instance (within AWS ECS, Azure, GCP, Blue Ocean, etc.). AWS ECS is usually enough (without Kubernetes) because the number of emulator (JMeter) instances is usually fixed before a test run (and adjusted after).

C. If you want to create emulator scripts offline on your laptop (one with enough memory), run several Docker images. You may not have enough power to run a conventional CI/CD (such as Jenkins) or much monitoring, thus the “N/A”.

D. There are other scenarios, but the most common scenario is standing up two cloud instances: an AWS ECS/K8S instance to run the app under test (such as Apigee) and another to run JMeter for performance/capacity testing. The flowchart below describes the intricacies that goes with such a setup:

To keep it simple, let’s say our system under test on-prem. consists of (1) a server responding to API requests behind a governance proxy such as Apigee. The API front-end needs to be setup first because it authenticates requests based on pre-assigned tokens provided to those who call the service.

A (2) Monitoring agent on each server (such as Dynatrace, Telegraf, SignalFx, etc.) collects various metrics for display on the vendor’s Dashboard.

Now we can begin to construct (3) JMeter scripts that impose artificial loads. From a laptop, we can only impose a limited load. But that is OK because we use laptops just to craft scripts. Once viable, the scripts, along with associated files, are pushed into a (4) private Version Control repository such as AWS Code Commit. Within security-conscious enterprises, instead of downloading installer packages from the internet, it is safer to obtain installers that have been vetted by Security specialists before being made available from a (5) private repository such as Artifactory or Docker Trusted Registry (DTR). A lot of work is needed to vet the many dependencies for those who prefer to build machines from the ground up using Configuration as Code (CaC), a practice that enables them to quickly respond to issues by being able to quickly change anything within the tech stack.

To make use of the Amazon cloud, on the laptop we install the (7) AWS CLI and associated tools to craft (8) Cloud Formation files that instantiate services such as EC2 with Docker to run server programs within the AWS Cloud. Within AWS, we (9) instantiate images containing JMeter using those common scripts in the code repository.

Before we run, we should (10) lint and audit the containers using various tools.

When we need to add more JMeter instances to impose a heavier load, we can use a (11) JMeter Master to coordinate the Jenkins slave nodes. The Master starts a fixed number of nodes to test (12) app auto-scaling mechanisms.

Next, we’ll look at (13) configuration settings for the cloud, such as AWS affinity groups to specify low latency between servers within the same Availability Zone.

When Configurations settings are under version control, changes can (14) trigger (15) CI/CD to automatically initiate test runs. If the analytics system has enough history, it can (16) recognize trends and, if anomalies are identified, issue (17) alerts while the changes are still fresh in the mind of the person who made the change.

Because network traffic between on-premises servers and load generators in the cloud is subject to significant variability, it would be ideal to have a (18) load generator near each machine under test. But it can be problematic going through the corporate firewall.

It might be easier to make use of a (19) web-based SaaS service such as Blazemeter or Flood.io. With them, we just upload a script and they handle the rest, such as configuring enough machines.

Below are more details about each deliverable: 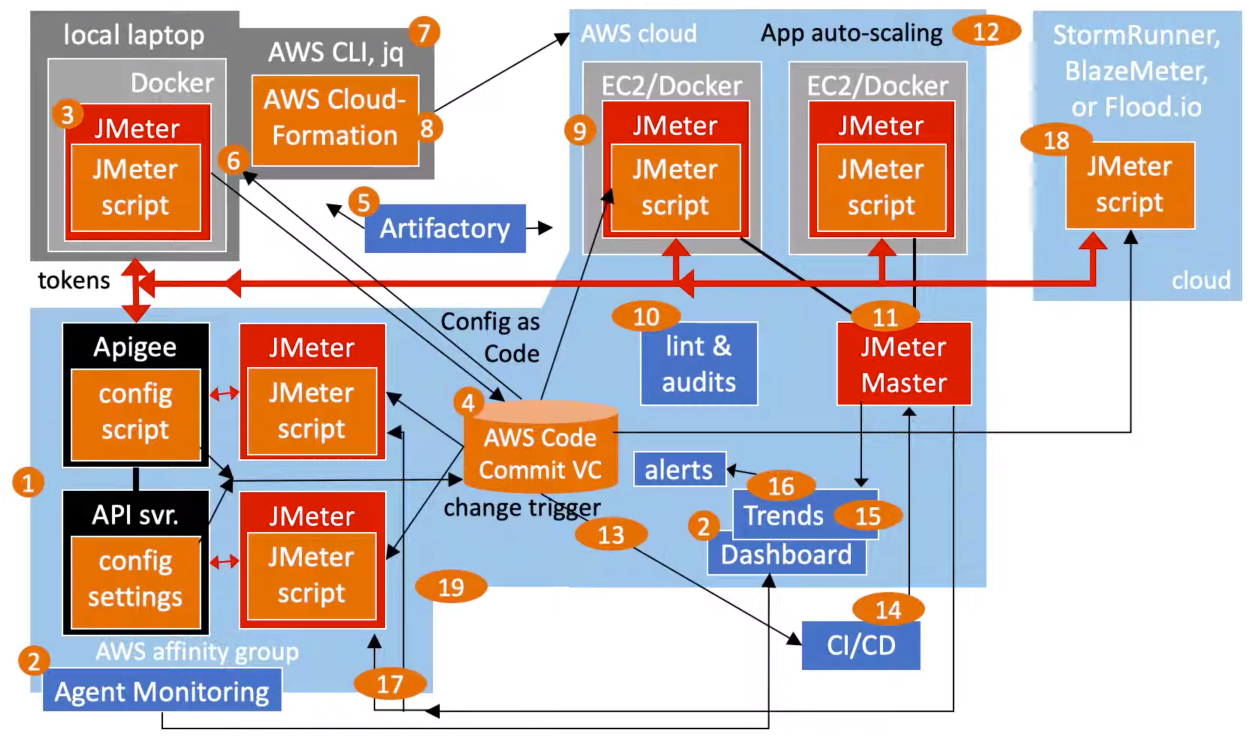 You can find the work referenced in this blog at:

(for example, https://aqueduct.flood.io/ to get through from internal IP’s in the cloud through a firewall exiting as TLS pipe with port 80/443. Similar to Ngrok. Flood.io filters out )

A Dockerfile contains all commands necessary to Docker to assemble an image. It is not a program like Java. It is a Domain Specific Language (DSL).

Docker commands are issued from a CLI or a shell script:

During the build process, many network contents can be fetched, so the time it takes can vary. The last message should read:

After the contents type can vary, from a simple text file to archive package (e.g. zip, tar.gz, rpm, deb, etc). Afterwards, these files are “installed” on the image with specific commands (e.g. copy for text file, unzip for zip, tar for tar.gz, etc).

Docker images run within a Docker service running in the background.

To minimize cost, we want to use a Docker image with the minimum memory requirement.

After a review of alternative images identified from a search of DockerHub, the one with the smallest memory is Alpine Linux. Its 200 MB is so small it can run on a Raspberry Pi.

“Alpine Linux is built around musl libc and busybox. This makes it smaller and more resource efficient than traditional GNU/Linux distributions. A container requires no more than 8 MB and a minimal installation to disk requires around 130 MB of storage.” – https://hub.docker.com/_/alpine/ lists Alpine Docker images.

In this example, the container starts and as a first action it executes a JMeter application with arguments passed with the “docker run” command. When JMeter completes its execution, the container stops itself, leaving the JMeter result files in the Docker volume.

With the script build.sh the Docker image can be build from the Dockerfile but this is not really necessary as you may use your own docker build commandline. Build Options

Build argumments (see build.sh) with default values if not passed to build:

The Docker image will accept the same parameters as jmeter itself, assuming you run JMeter non-GUI with -n.

There is a shorthand run.sh command. See test.sh for an example of how to call run.sh. User Defined Variables

This is a standard facility of JMeter: settings in a JMX test script may be defined symbolically and substituted at runtime via the commandline. These are called JMeter User Defined Variables or UDVs.

See test.sh and the trivial test plan for an example of UDVs passed to the Docker image via run.sh.

The Docker image will install (via Alpine apk) several required packages most specificly the OpenJDK Java JRE. JMeter is installed by simply downloading/unpacking a .tgz archive from http://mirror.serversupportforum.de/apache/jmeter/binaries within the Docker image.

Run Docker with monitoring and with auditing on

Each InfluxDB dataset contains key-value pairs consisting of the fieldset and a timestamp.

--rm removes the container after run conclusion, to avoid container information being preserved during restart.

--name is the running container name, also used as a domain name in the Docker network.

--dit runs the container in the background with a local shell, ready to be used like a remote ssh command line.

-e pass the environment variable to the recently created container. In this case we configured:

-v assigns a logical volume on the hosting machine. It persists on container restart. Use of this volume limits disk space to only necessary data.

InfluxDB has no external dependencies and provides a SQL-like language with built in time-centric functions.

Grafana is not directly connected to JMeter, but can be added to our process via Docker.

Code for the above is from https://github.com/santosharakerre/jmeter-base

Pluralsight does not have a JMeter course as of March 1, 2019.

NOTE: This is based on the structure of folders at

https://aws.amazon.com/blogs/devops/setting-up-a-ci-cd-pipeline-by-integrating-jenkins-with-aws-codebuild-and-aws-codedeploy/ Setting up a CI/CD pipeline by integrating Jenkins with AWS CodeBuild and AWS CodeDeploy by Noha Ghazal 29 OCT 2019

https://www.programmersought.com/article/18926104968/ How to use AWS EC2+Docker+JMeter to build a distributed load testing infrastructure

https://www.youtube.com/watch?v=E02iab7vZyg How to use JMeter in Jenkins

https://www.cloudbees.com/blog/how-integrate-jmeter-jenkins How to integrate JMeter into Jenkins by Dmitri Tikhansi from BlazeMeter.