This article are my notes about GoCD, described at website gocd.org (previously at https://go.cd).

My contribution here is logical sequencing for a deep yet concise presentation.

With “Go” in the name one would think that it’s written in the Go language. But GoCD is actually built using Java and JRuby on Rails. It was re-branded in 2010 before Google released the Go language.

GoCD is from ThoughtWorks, which makes money by providing commercial (paid) plugins for GoCD, but primarily from consulting services. The company has a 90% employee referral rating on Glassdoor.com. It publishes future-thinking Tech Radar each year and hosts XConf in various cities.

Martin Fowler, Thoughtworks Chief Scientist since 2000 [4] (along with Jim Highsmith and other software visionaries) authored the Agile Manifesto in 2001.

Thoughtworkers Jez Humble, Chris Read, and Dan North presented their ground-breaking “Deployment Production Line” at the Agile conference in 2006. While working on the oft-quoted 2010 book Continuous Delivery with and David Farley, Jez Humble began working alongside a team in Beijing to create the product which later became GoCD. Jez Humble also co-wrote with Gene Kim the best-seller DevOps Handbook.

GoCD was implemented as a tool to enable teams to achieve high performance such as these benchmark results:

From BOOK: Accelerate quoted by [3]

GoCD also has a “Failure Rate” metric of the percent of jobs that make it all the way through successful Deployment into production.[6] 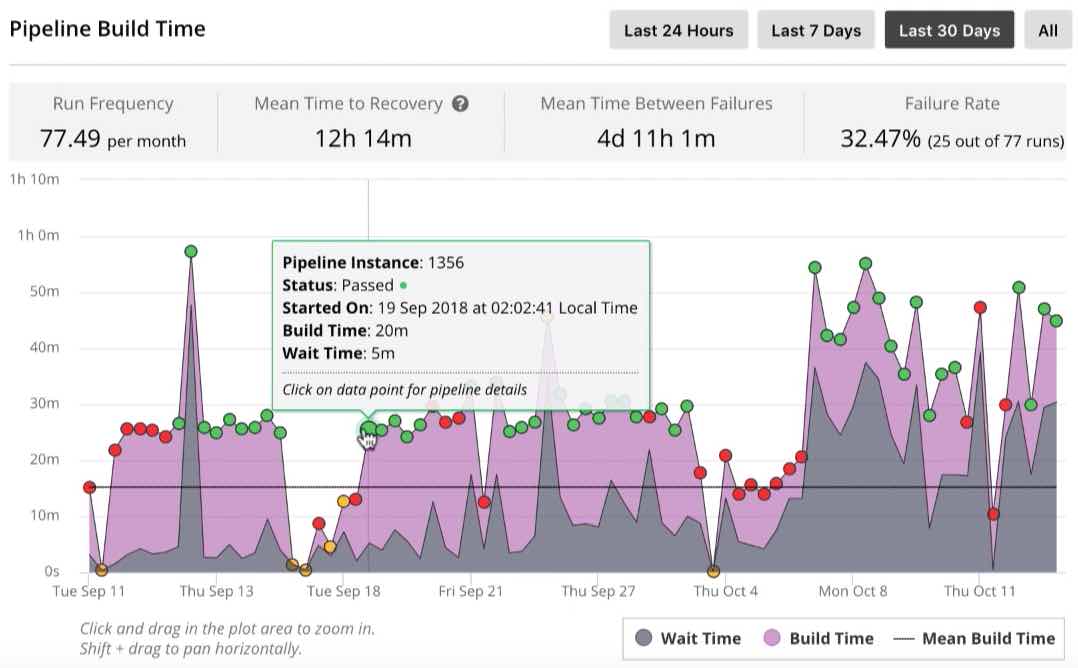 To drill-down into the gray area representing waiting time for each stage, look at each job’s Workflow Time Distribution:

All this is so when things go wrong, it’s easy to identify both the upstream cause and the downstream effects.

CI/CD Delivery to Production, not just Deploy to Test

The “CD” in GoCD is for “Continuous Delivery” (not just Deployment). As Humble states in his website ContinuousDelivery.com:

“Continuous Delivery is the ability to get changes of all types – including new features, configuration changes, bug fixes and experiments – into production, or into the hands of users, safely and quickly in a sustainable way.” [3]

GoCD achieves CD with an automated pipeline of continuous testing and acceptance of small increments of changes to code always in a deployable state.

GoCD provides visibility (traceability) over the end-to-end workflow from version control to production, even by teams of thousands of developers making changes through a complex pipelines on a daily basis.

GoCD manages the metadata rather than jobs needing to pass metadata between jobs, as in Jenkins.

VIDEO: Pipelines as Code with GoCD by Tyler Moody of Sonic at DevOpsOKC Jan 25, 2019 [7:50] Gomatic from Thoughtworks is a Python library to reverse engineer pre-existing pipelines by translating Python code into XML and posts to GoCD.

GoCD implements the vision of a pipeline to production as low-risk, predictable, routine, performed on demand. This is achieved by eliminating delays during “code freezes” for integration, testing, and hardening phases that traditionally followed “dev complete”. 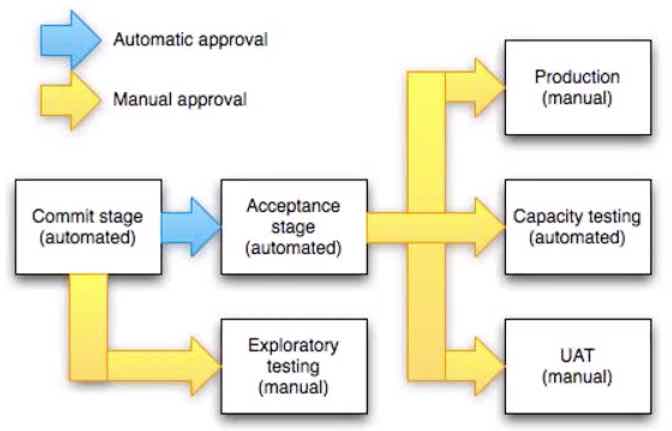 PROTIP: Wisdom from Thoughtworkers is that feature and long-lived branches are an anti-patterns. Commit into master. They recommend that every commit should trigger a build. And broken builds should be fixed immediately. That is also the recommendation from Security experts, who say always “be ready for another Heartbleed vulnerability” which required rebuild of the core operating system. Technical debt block the quick action needed to remediate before hackers take advantage of vulnerabilities.

Unlike Jenkins, which has pipelines as tasks within each job, GoCD’s primary organization are pipelines. 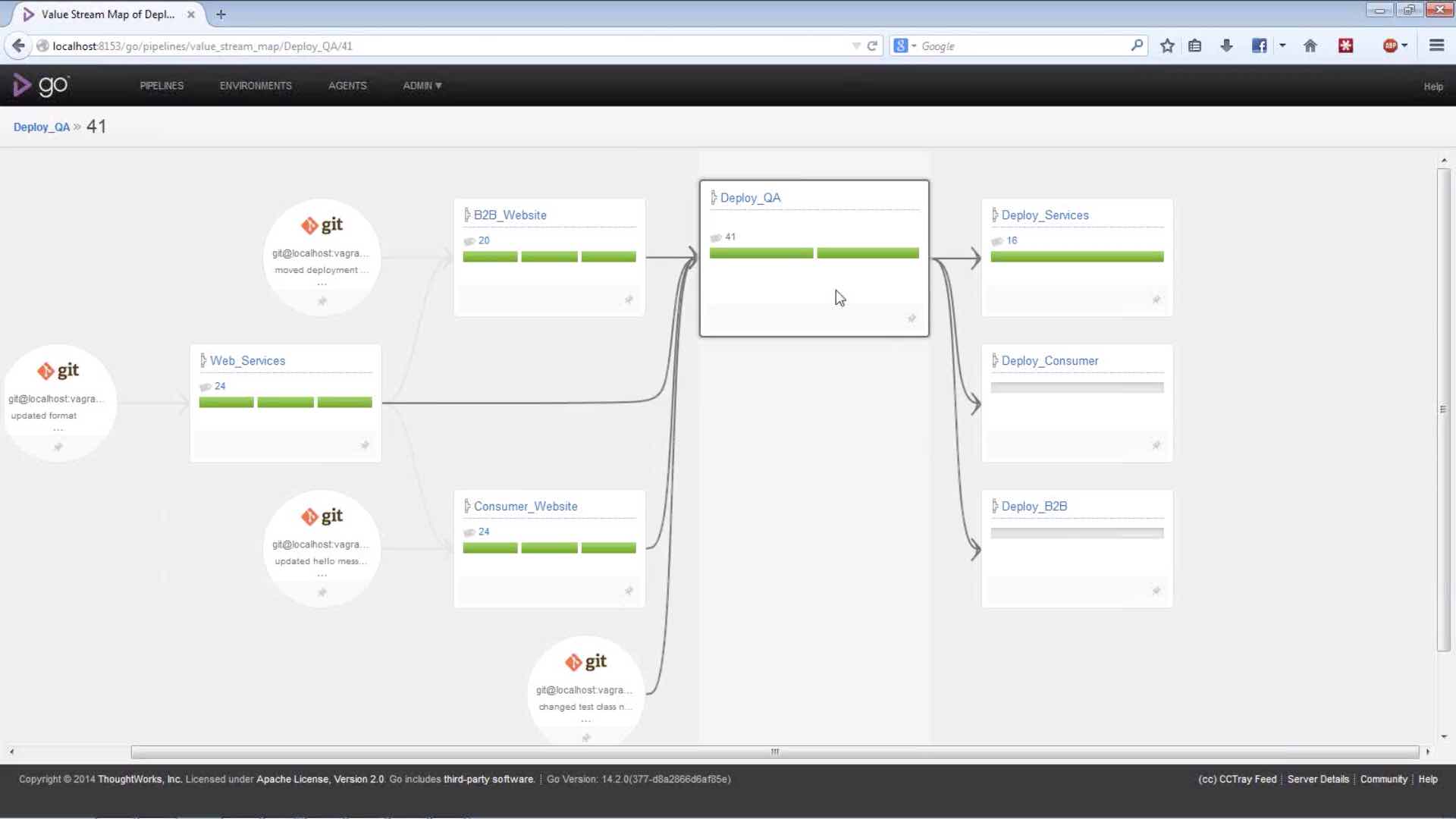 PROTIP: You’ll need to ask your Network Admin. to open up default port 8153 to serve UI/API and 8154 to control GoCD Agents.

https://hub.kubeapps.com/charts/stable/gocd (managed by Bitnami) provides a Helm Chart to make it easy to install and operate GoCD in its entirety on a Kubernetes cluster (like brew on macOS). See “Getting Started with GoCD on Kubernetes”. (a running instance of a chart with a specific config is called a release)

A. Install GoCD as a Kubernetes native application with an officially supported helm chart B. Scale GoCD agents seamlessly with the new ElasticAgent plugin that spins up agents on the fly in response to build workload C. Design Docker-based build workflows as Docker in Docker

For your custom app, custom Docker images are created when a build pass tests so that Kubernetes makes use of images to load Staging and Production:

On MacOS, install a Server and Agent components:

NOTE: brew search gocd did not return any hits.

GoCD’s proposition is (similar to GitLab) – providing the most common CD scenarios out of the box - while Jenkins aims for general-purpose automation by extensibility with 3rd party plugins. That’s how GoCD avoids the issue of plugins that can be missing features, obsolete, or does not work well with others.

GoCD has a handful of extension points that are interoperable with each other:

[5] Webinar: Continuous Delivery with Docker, Kubernetes, and GoCD May 7, 2018 by Sheroy Marker (@sheroymarker) and Ken Mugrage