This describes the ecosystem around the “Serverless” computing concept to build applications as a collection of microservices that run in response to events, auto-scaled in a cloud.

This article is a pre-requisite to my tutorial on creating a new Amazon Lambda serverless app running in the Amazon cloud.

A sentiment about physical servers is reflected in the wi-fi password used by attendees of #ServelessConf:

“Serverless” refer to an architectural style called FaaS (Function as a Service) where software program code are independently deployed and run on a cloud system for “zero system administration” by the developer.

This is also called an “event-driven system”.

For those who want to run a lean shop, it’s a fast, easy, low-cost route to get apps in production without worry about scalability. Unlike renting a machine (as in EC2) which accrue charges even when idle, charges for Serverless functions accrue only when individual requests are invoked.

Mike Roberts at http://martinfowler.com/articles/serverless.html wrote “Depending on the circumstances, such systems can significantly reduce operational cost and complexity at a cost of vendor dependencies and (at the moment) immaturity of supporting services.”

PROTIP: It’s still up to developers to do testing and performance measuring and tuning. Use of multi-tenancy makes for response-time variation. So do sythentic transactions outside the cloud vendor to monitor user experience, and to keep your app in cache to avoid process start-up after sleeping.

“Serverless is on the relentless historical trend toward industrialization” – @simonwardley 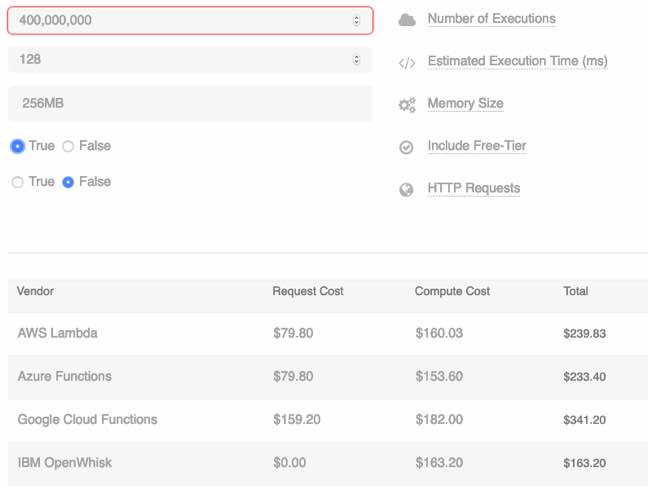 Google App Engine in 2008 was arguably the first.

“You never pay for idle” Austen says in an interview with CloudAcademy Introduction to the Serverless Paradigm [23:50]

WRONG! While Lambda does not incur charges while idle, DynamoDB,, which Amazon touts as the default database, do incur charges for data stored (even though no data is read or written to it).

PROTIP: On AWS use SimpleDB instead of DynamoDB for true no-cost idle.

PROTIP: The other side of freedom from server hassles is that developers also give away control.

Having one’s data in another company’s cloud requires trust in that company’s ability to keep data secure, redundant, and pricing fair.

PROTIP: Going with a particular vendor’s API means that you need to keep up with changes in APIs that can occur frequently, even though they may not apply to your own operation.

There is the danger of vendor lock-in.

But frameworks have emerged to allieviate that:

Serverless usage in the wild

When a $9 million monolithic app built for the Australian Census failed, two students over two-weeks created a scalable system using $500 of compute time (including load testing).

An audio Q&A with The CTO of New York Times, Nick Rockwell, who migrated the paper to using React and GraphQL Apollo that reads off of a Kafka pipeline on Google Cloud and Big Query.

Functions need to be Stateless (not long-running tasks)

Functions that access resources (such as PaaS databases) should be in a private cloud, which AWS calls VPC (Virtual Private Cloud).

Functions that access resources over the public internet should run the function in a subnet with a NAT’d route to the internet.

NodeJs start up faster than Java.

There are 3 execution models:

CloudWatch warming triggers every 5 minutes to keep code in memory to reduce warm-up time. This is to avoid Freeze/thaw errors. 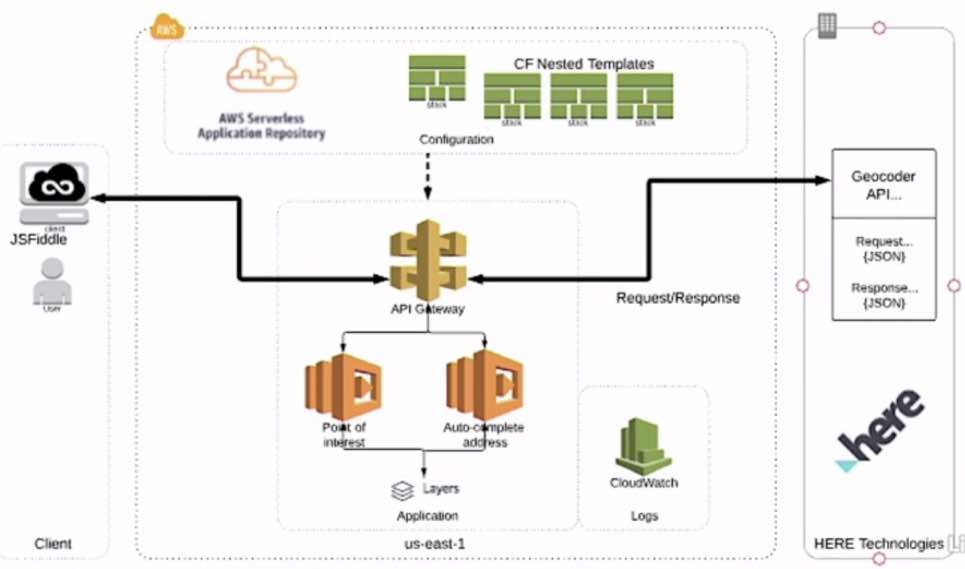 Search/browse generic pre-defined apps from the AWS Serverless Application Repository (SAR). Configure one and deploy it.

Two AWS evangelists created pre-built templates with manual instructions, which they walked though in 30 minutes on Twitch.tv:

More examples are at https://github.com/serverless/examples 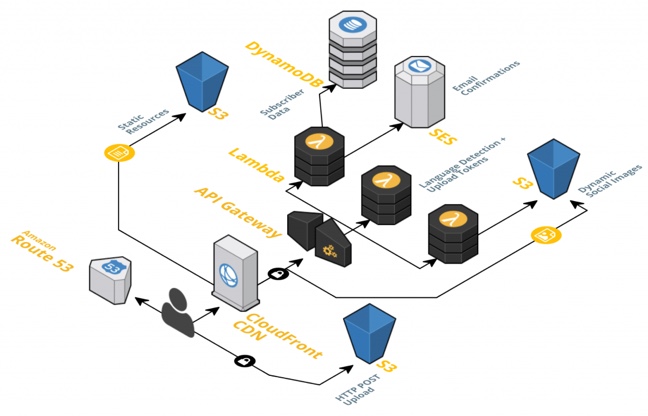 PROTIP: The future of FaaS vendors isn’t the front-end but the back-end services that include API Gateways and Artificial Intelligence features such as image recognition, text sentiment analysis, natural language process (NLP), and Machine Learning.

PROTIP: The payoff for housing the back-end in a public cloud is for machine learning and AI services to be added. For example: https://github.com/aws-samples/aws-serverless-ember 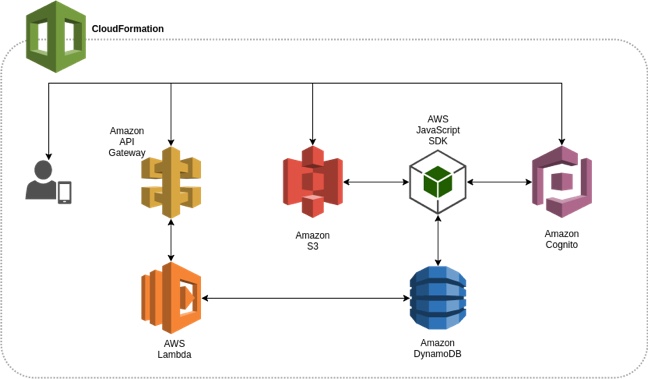 Marketing information is at https://azure.microsoft.com/services/functions

The advantage of IBM’s hybrid-cloud approach is that one can use IBM’s proprietary Bluemix UI and then use command-line with OpenWhisk (which is open sourced).

Iron.io and other on-premises

Iron.io has their Gesalt Framework

For a “test-first” approach to achieve code maturity, doing test runs locally before committing to a team branch is important.

Currently the following variables are exposed to Terraform:

The name “serverless” has been co-opted by enprepreneur Austen Collins @austencollins who built the Serverless company around its open-source Serverless Framework on GitHub, a combination of command-line utilities and conventions.

His initial Serverless presentation at AWS:Invent 2015

Hacker News announced it in 2015 when the product was first called JAWS.

PROSTIP: The Serverless Framework is a command-line tool, providing scaffolding, workflow automation and best practices for developing and deploying your serverless architecture.

Below is an annotated, expanded verson of this:

.npmignore defines files and folders for NPM to ignore.

.travis.yml is used by the Travis task runner.

Dockerfile defines how to load the server in Docker.

.idea contains settings for use by the IDEA IDE.

The heart of Serverless are its Plugins, which makes it extensible.

Plugins can be written in python, node.js, java, scala or C#.

Plugins need to be installed for each project that uses each.

PROTIP: Functions of the same component can use the lib folder to share common code.

Lambda functions can be defined from a command-line using the Serverless framework.

Lambda functions have a deploy.env file in combination with the --configFile flag to set values which will be prepended to your compiled Lambda function as process.env environment variables before it gets uploaded to S3.

Secrets such as DB connection string or encryption key are secure values that should not be checked into version control (specified in a .gitignore file).

Structure of Folders and Files

PROTIP: The serverless framework save developers’ time by standardizing the structure of folders and files.

This set of project file is what developers work with.

The serverless framework programming which read and process project files is written in Node JavaScript.

A key differentiator with the Serverless Framework is that infrastructure specs are defined as code in one project. s-resources-cf.json is a AWS CloudFormation template specifying security (IAM) roles, SNS email topics, DynamoDB tables, Queues, ARNs.

Within the folder for each function is a s-function.json file containing metadata such as plugins installed with the project.

When the framework is created for a project, a .gitignore file is created with other files to specify private and temporary work files that should not be publicly uploaded to GitHub.

Project metadata in file _meta outputs and user variables used in function configurations. But due to the sensitive nature of these variables, the file needs to be gitignore’d by default. A workaround is to use the Serverless Meta Sync plugin which stores project metadata in S3.

By default, AWS Lambda limits the total concurrent executions across all functions within a given region to 100. This is a safety limit to protect users from costs due to potential runaway or recursive functions during initial development and testing. To increase this limit above the default, request a limit increase for concurrent executions here.

Instead of giving you an emulator for local development, Azure give you the runtime. The whole box. The Azure Functions Core Tools is the same runtime that Azure uses in the cloud. Because you get the whole runtime, you can build any kind of function locally. Blob and Azure Message Queue Triggers as well. Not just HTTP triggers.

Open an Azure Functions project in VS Code, and you are prompted to setup an extension to run and debug functions, put a breakpoint in the gutter and hit the green button in the debug panel.

A crash course on Serverless APIs with Express and MongoDB

Taking Serverless and AI to the Next Level February 27, 2018 by Yaron Haviv, Tomer Rosenthal

Zip fileslocally and upload to Lambda

This is one of a series on Cloud computing