Run the deliberately insecure Java app within Docker with a Contrast Security agent reporting issues and trends over time.

NOTE: Content here are my personal opinions, and not intended to represent any employer (past or present). “PROTIP:” flags information unique to this website, based on my personal research and experience.

WebGoat is used instead of sample apps which contain only unintended vulnerabilities, such as Microsoft’s Music Store .NET app, which is not updated anymore

WebGoat is one of the subjects in the VIDEO: CSSLP (Certified Secure Software Lifecycle Professional) exam.

WebGoat source is open sourced at:

Code for both Goat apps are being actively maintained up to the current time.

Other intentionally vulnerable apps are 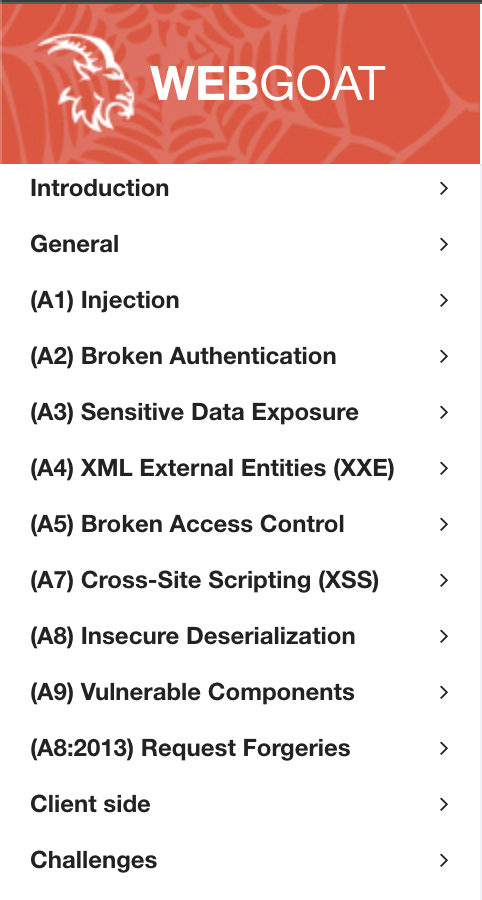 The WebGoat server presents a list of common vulnerabilities as classified by OWASP Top 10. Note the WebGoat menu is missing (A6) Security Misconfiguration and (A10) Insufficient Logging.

For each vulnerability, it provides coding tutorials along with a UI to initiatie penetration attacks on itself. For example, to prove that it can use an Insecure Deserialization vulnerability to take over the machine running, it opens that machine’s calculator app (which a well-behaved app would not be able to do).

The goat apps are used to train and benchmark appsec scanner tools such as Fortify, Contrast Assess/Protect, etc.

CAUTION: While running this program your machine will be extremely vulnerable to attack. You should disconnect from the Internet while using this program.

Get WebWolf GUI from Docker Hub

There is an all-in-one WebGoat container on Docker Hub, with WebGoat and WebWolf running inside:

NOTE: The lead contributor (nbaars), Googler Nanne Baars, lives in the Netherlands (where Amsterdam is the largest city).

The image contains a JRE.

WebGoat’s default configuration binds to localhost to minimize the exposure.

The OWASP benchmark (at https://owasp.org/www-project-benchmark) is a sample Java application containing 1,415 vulnerabilities in 11 categories:

Vulnerability scanner vendor Snyck’s State of Open Source Security in DevSecOps Pipelines” 2020 report revealed this scatterplot of the number of vulnerabilities (CVEs) on the vertical scale compared against the number of projects impacted by them on the horizontal scale. 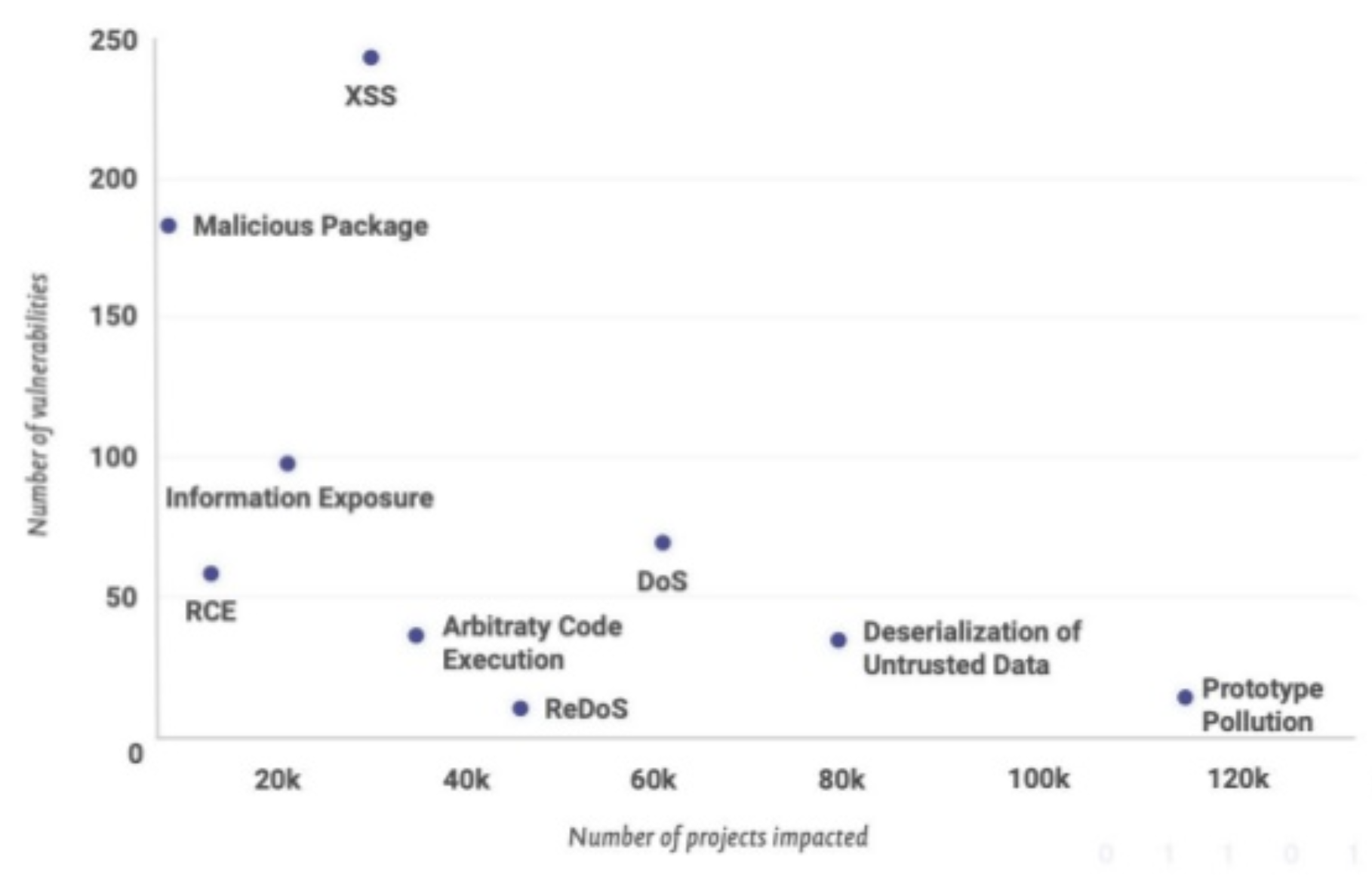 VIDEO: Alyssa “There is nothing in the upper-right quadrant, and that was shocking. …we can have hundreds and hundreds of cross-site scripting vulnerabilities reported in packages, but the number of projects that those packages impact is fairly small. On the flip side, you have deserialization and prototype pollution which are more complex … and later to the game. For prototype pollution there were 3 vulnerability reports but the reason they had such massive impact is they were found in open source packages* that are widely used (lodash CVE-2019-10744*, jQuery CVE-2019–11358).”
VIDEO

Counterparts written in other languages:

There are several tools available to conduct penetration testing against the WebGoat app.

In this pdf, ShiftLeft.io notes that false positives found in just 3 snippets as due to “overtainting” collections and disabled branches of switch statements that are unreachable, which is a rare edge case.

ShiftLeft claims that the accuracy of its “NG SAST” (Next Generation) utility is greater than traditional code analysis tools. NG SAST queries binaries and source code modeled by Code Property Graph (CPG) which combines many graphs. It combines graphs from the compiler (e.g., the abstract syntax tree, the program dependence graph, the control flow graph, etc.) to generate a single graph that contains all possible routes from all sources to all sinks, including all security transforms and sanitization steps. 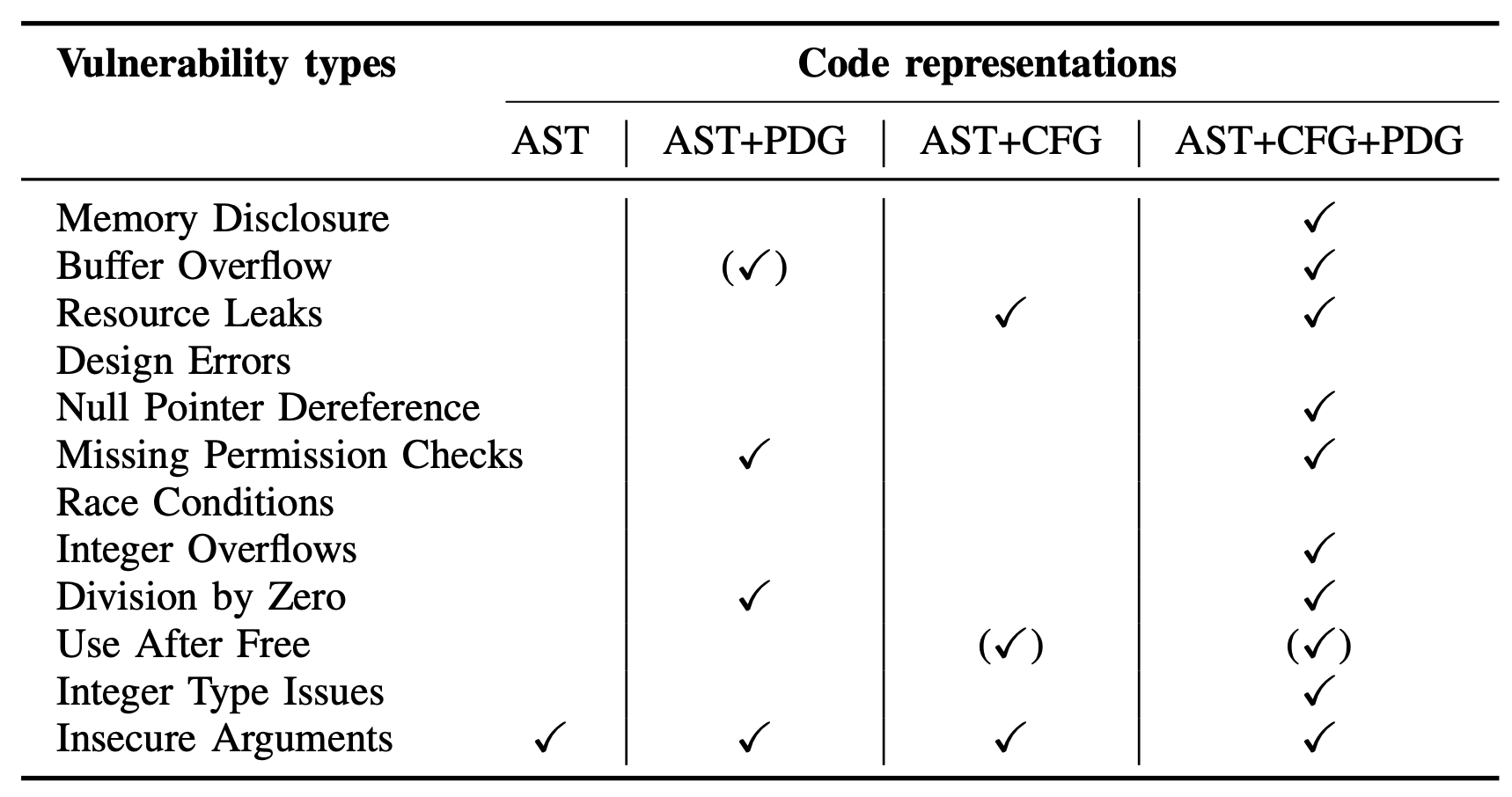 The table above* compares how ShiftLeft augments existing techniques to identify vulnerabilities:

The combined Code Property Graph (CPG) provides a representation of app code under test (in a graph database) that is multifacted enough to deal with the complex combinations of program properties which can make it vulnerable.

CPG enables NG SAST to accurately determine when routes are actually vulnerable to dirty inputs vs. when the route is protected by sanitization.IEEE whitepaper “Modelling & Discovering Vulnerabilities with Code Property Graphs” by Fabian Yamaguchi.

ShiftLeft Security achieves less false positives in static SAST and less false negatives in dynamic DAST because it has a data-flow tracker which “is interprocedural, flow-sensitive, context-sensitive, field-sensitive, and operates on an intermediate code representation. The engine performs on-the-flypoints-to analysis to resolve call sites and is able to benefit from the results of constant propagation, control flow graph pruning, and framework analysis passes.”

Many CWE are for C/C++ code. Joern is a vulnerability research platform for robust analysis of C/C++ code.* 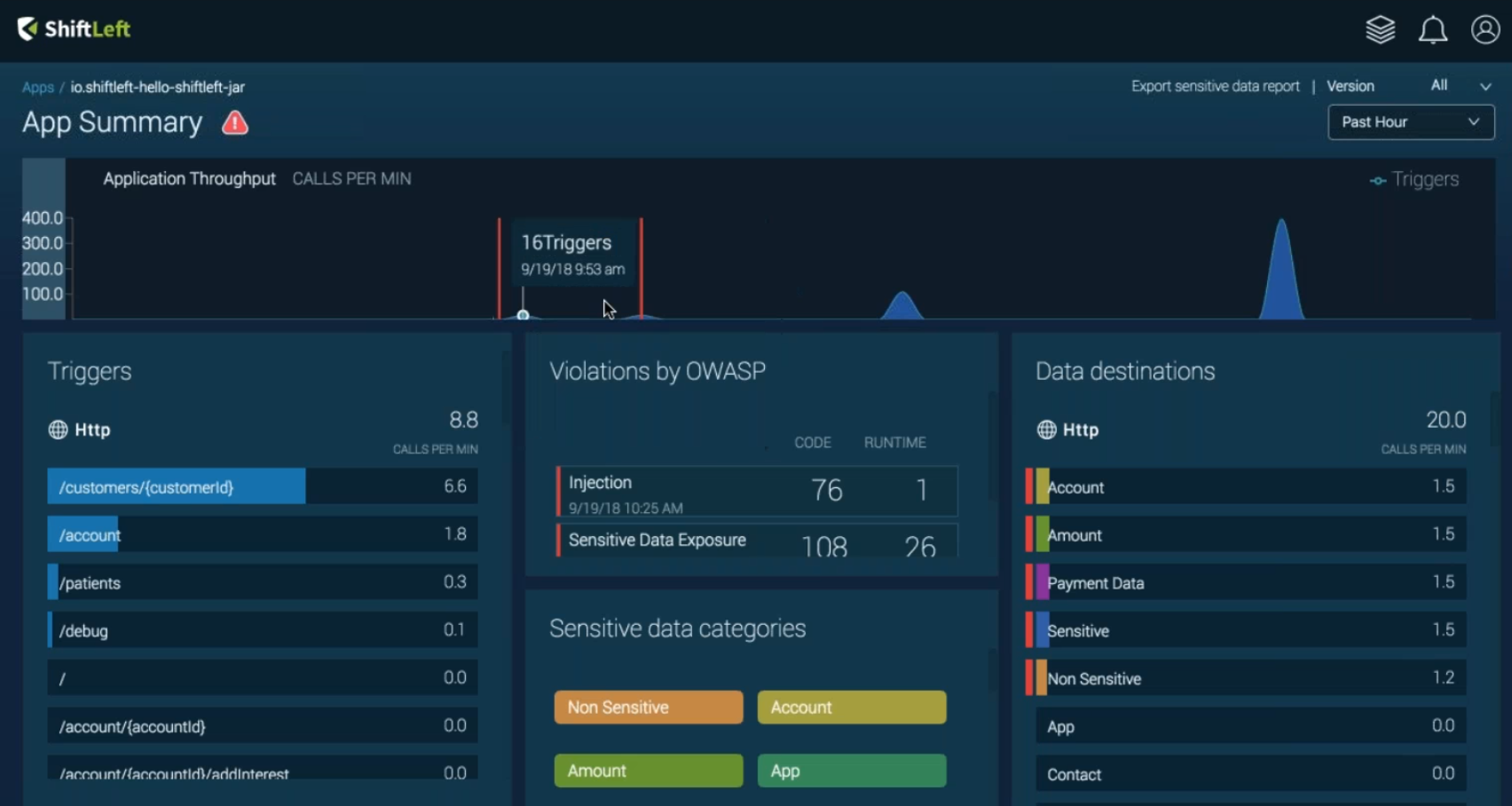 NOTE: The above is no longer sold.

Contrast Security can determine whether attacks are occurring on WebGoat (the “Protect” portion of its offering). It also can assess whether the app code is vulnerable to attacks. 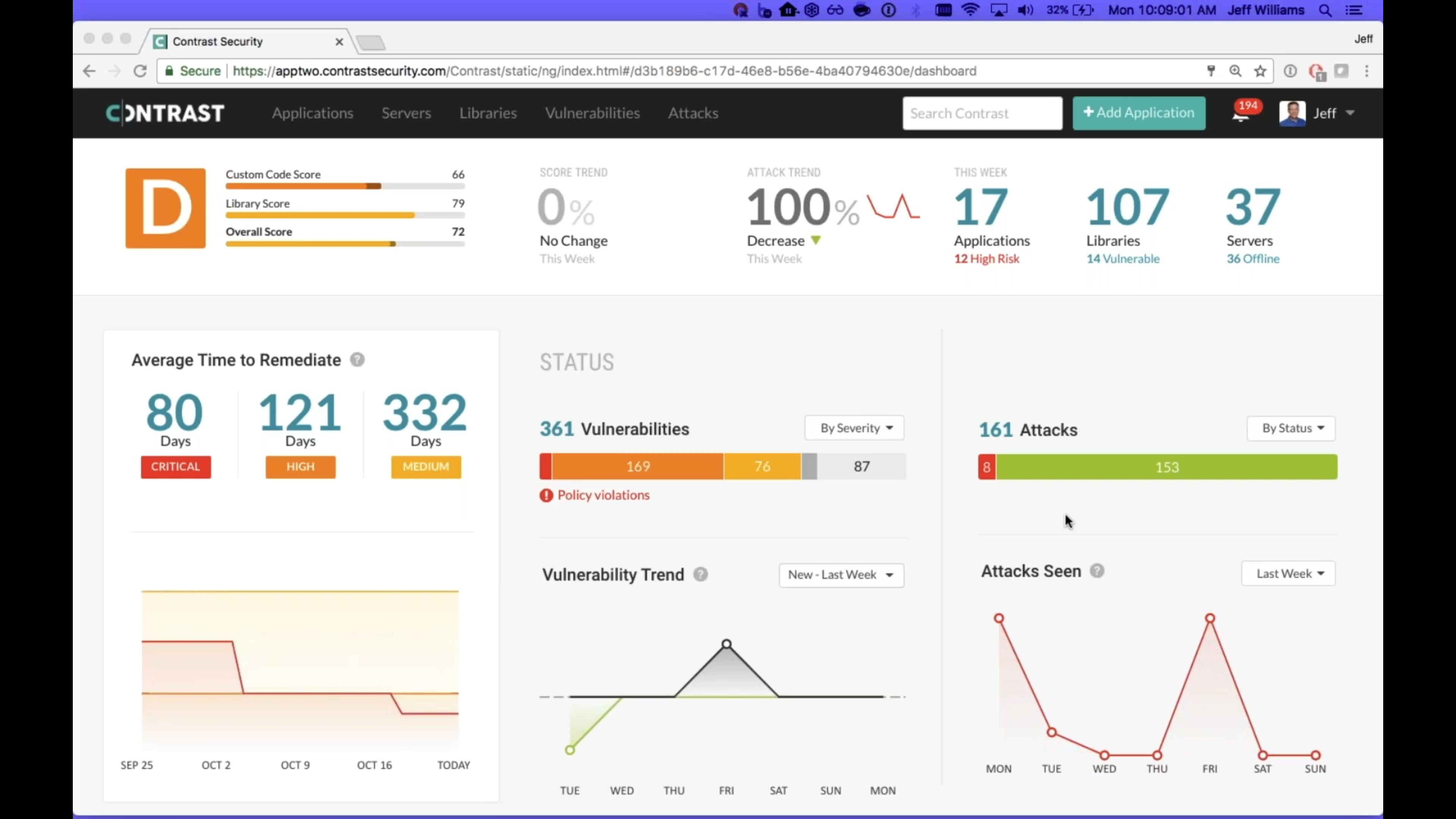 You can run WebGoat from DockerHub with the Contrast Security agent added by quickly triple-clicking the command below and pasting it on your macOS or Linux server Terminal:

The script installs all that is needed, including Docker Desktop. It downloads docker-compose.yml from:

The Contrast agent intercepts all calls from the app, and analyzes the stream of calls to make sure they’re secure, and validates data requests directly inside the app. The continuous interception essentially provides a chance to “innoculate” apps from vulnerabilities such as struts2. Without it, apps are “sitting ducks” while time is taken to add CVEs to scanners, then more time to replace, retest app code.

At time of writing, the image contains OpenJDK 8 (not 11). The agent analyzes Java byte code. So it works with Scala as well as Java code. And it works with both custom code and libraries. It protects both web and non-web apps. From the inside out.

The agent emits issues found to a an on-prem. or SaaS collector by Contrast Security.

The Contrast server can then send alerts to Slack.

The Contrast dashboard visualizes the count of Vulnerabilities and Attacks seen over a period of time. 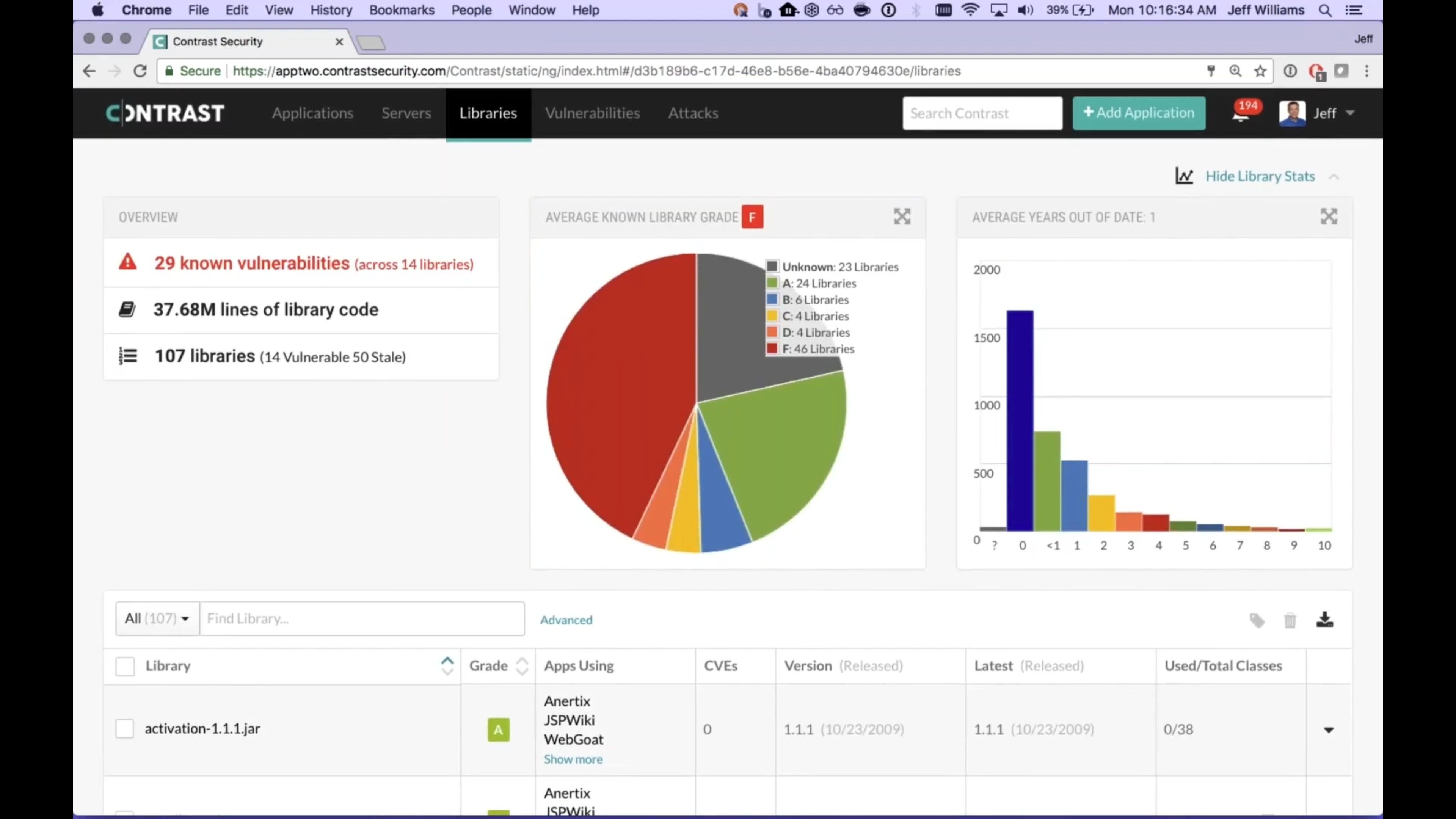 The Contrast Policy Management GUI enables specification of Protect Rules specific to an environment: Dev, or QA, or Prod.

The agent calculates the number of logical paths through the application code. So it knows when a library loaded by the app is not even used. And it provides context not understood by external blocking-mode WAF. Contrast enables database queries fully formed (not just the way it looks at the firewall).

The down side of this approach is that business process (end-to-end) test automation scripts are needed to exercise the app fully. So scripts written for running by WebInspect, Burp Suite, and other Dynamic (DAST) pentration testing tools are still useful.

-s among shell script parameters specifies that the script read secrets from the default file secrets.env on your $HOME user folder. But before running the script, populate values for variables after you get a trial account at Contrast Security.com:

-o opens the web page to show the WebGoat GUI.

The port (8080) is hard-coded in variable APP1_PORT in the sample.sh script.

https://find-sec-bugs.github.io is the SpotBugs plugin for security audits of Java web applications. It claims to detect 135 different vulnerability types with over 816 unique API signatures.

In General > HTTP Basics page, it mentions installing and running the Zed Attack Proxy (ZAP) the latest using (on a Mac):

Burp Suite from https://portswigger.net/burp has a Community Edition.

Installing Burp Suite And WebGoat [10:01, turn off volume] on Windows.

John Marx has 1 hour hands-on video course about how to run the OWASP Dependency Check Lab (run-depchedk.sh) as example of a SAST (Static Application Security Test) for both build-time and run-time use against the webgoat.jar file from the Linux command line (after get-webgoat.sh).

The Dependency Check is run from a Docker Container containing an Apache Web Server. The run outputs HTML reports. It is reviewed and methods for use of these reports by production monitoring applications.

Once you have verified that the instance is fully operational, use the get-webgoat.sh shell script to pull the webgoat .jar file from github.com

Once the .jar file is downloaded to the cloud_user home directory, run the shell script that uses docker to pull the OWASP Dependency Check program from Docker Hub and execute it.

*Note: You will need the cloud_user password to run as a sudo user.

After the Dependency Check program has completed, you can use an ls command to view the reports created.

Once created, use the copy.sh script to copy the .html reports to the apache web server root.

After the files have been copied to the apach root, check that they are there with an ls command.

Now view the reports from your browser usiing the following URL addresses:

This is one of a series on Security in DevSecOps: